The robot revolution down on the farm

Investment is booming in autonomous machines to spray, weed and harvest

Australian farmer Andrew Bate has turned his 10,000-acre grain and cattle farm in central Queensland into an open-air robotics laboratory. On dusty brown fields where wheat, cotton and chickpeas are grown, Mr Bate tests robots designed to solve problems that farmers commonly deal with, such as removing weeds and harvesting crops.

His company, Swarm Robotics, has created a fleet of small robots that work in groups to achieve tasks once the domain of large tractors, sprayers or planters. The robots are already in use with farmers in the region, who rent them for a per-acre fee, and another 10 robots will be manufactured soon.

“We started out because we were looking for better ways to farm, not necessarily to save labour,” says Mr Bate, who founded the company with his wife in 2012. “What we’re doing now is the tip of the iceberg — it’s the next wave that will be really exciting.”

Mr Bate is part of a broader effort by start-ups, venture capital funds and big agricultural companies, such as seed giant Monsanto and chemical group DuPont, to bring robots to bear to solve some of the thorniest problems in farming. They are betting that bringing robots into the fields will improve efficiency and crop yields, thereby boosting the profitability of farms. One day robots could even replace human farm workers such as fruit pickers, although they are far from being ready to do so.

The development of agricultural technologies is booming: investors ploughed more than $700m into such companies in 2017, according to research firm CB Insights, more than double the figure of a year earlier.

To date there are two main types of agricultural robots in development: those that help farmers reduce inputs, including herbicides, pesticides or fertiliser, and those that seek to replace farm workers by using machines to harvest crops of various types.

There are at least eight ventures trying to crack strawberry picking

There is also the hope that robots could make farming smaller parcels of land economically viable again.

“Just as mobile computing, sensors and artificial intelligence are transforming other industries, we think they will have a dramatic impact on the farm,” says Ben Chostner, an executive at Blue River Technology, which makes robots that use computer vision to precisely target herbicide spray at weeds.

Tractor maker Deere & Co acquired the start-up last year for $305m, and is now helping to develop its See and Spray robot, which purports to cut herbicide use by 90 per cent. Blue River is refining and deciding how to market the robot, so has not started selling it yet.

Khasha Ghaffarzadeh, research director at IDTechEx, a market research firm, studied the range of agricultural robots available today and found that some technologies — such as auto-steering tractors, automated cow milking machines and remote-controlled spraying helicopters — are already quite common. Drones are also used to inspect fields and herd animals.

Other robots are still early in development, such as those that rely on computer imaging. “This won’t be an overnight revolution; it might take 20 years for farm practices to change,” says Mr Ghaffarzadeh.

One type of robot that is in its early days of commercialisation are those that weed fields mechanically, therefore reducing the use of chemical herbicides. France’s Naïo Technologies has begun selling four such robots of different sizes to farmers of lettuce, vegetables, or wine grapes.

The farmers who buy the robots either want to follow organic practices or are struggling with weeds that are resistant to chemical products, says Gaëtan Séverac, one of the co-founders of Naïo. “Our robots can reduce farmers’ usual budget on weeding by one-third,” he says.

Fruit-picking robots are further from commercialisation. There are many challenges to be overcome before strawberries or apples can be harvested as easily as a wheat crop in a large field. Fruits and vegetables do not grow in uniform sizes or ripen at the same rate. Often the more sensors and cameras are fitted to a robot to improve its performance, the more fragile and unsuited for farming it becomes. Farm robots must be able to operate reliably amid dust, dirt, wind and varied temperatures.

Another problem faced by robots aimed at picking fruits is that they cannot see through leaves or in the shadows cast by trees and branches. Plus it is hard to make a robot arm with enough dexterity and suppleness not to bruise or cut the fruit.

Different companies are coming at the fruit-picking problem in different ways. Strawberries are a good example. Florida-based Harvest CROO Robotics is developing a large machine that rolls through fields where strawberries are grown on the ground as usual. It has 16 robotic arms that spin in concert to pick a plant in eight seconds.

In contrast, Spain’s Agrobot has developed robots that work with so-called trellis systems, where strawberries are planted on table tops, making them easier to pick.

Meanwhile, a UK start-up called Dogtooth and another Belgian one named Octinion are designing systems with robotic arms mounted on mobile platforms that scoot around the fields to collect berries.

Paul Bisset, chief executive of Harvest CROO Robotics, which is backed by $7.5m from several big US strawberry growers, says the industry had no choice but to turn to technology given the shortage of migrant workers.

“There are at least eight ventures trying to crack the strawberry-picking problem,” he says. “Right now the robotic arms are not fast enough or cheap enough to replace human labour but one day that will change.” 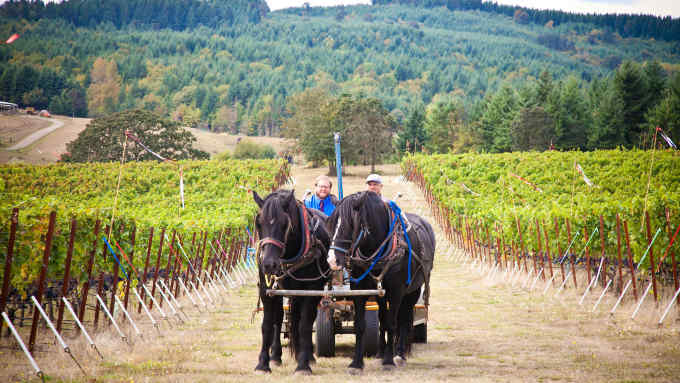