Our little slice of America in the Cotswolds

Come summer, tourists flock to Stow-on-the-Wold, swelling the population of the picturesque hillside market town situated in a corner of the Cotswolds by the coachload. Its souvenir shops do brisk business, the throng stocking up on Cotswolds-themed jams and keepsakes to take home. But Andrew and Jesse D’Ambrosi, owners of the town’s eponymous fine food store, have never been interested in taking a major slice of this pie. Their offering, focusing on providing restaurant-quality takeaways, has been honed to the needs of locals.

Andrew D’Ambrosi, an American blow-in who set up shop with his wife Jesse in 2020, is a first-class chef. Before moving to the Cotswolds, the pair ran a restaurant in the Loire Valley, but found themselves battling with bureaucracy before finally throwing in the towel.

“It was a killer,” says Jesse, who lived in Paris for most of her adult life. “We felt so welcomed by the community but not as business owners. We were under a microscope, and eventually cut our losses.” More pressingly, the pair have a young daughter, and felt it was time to address their work-life balance. Brooklyn-born Andrew had worked in Michelin-starred kitchens, and ran a group of New York restaurants. “Andrew was opening restaurant after restaurant but we never saw each other,” Jesse recalls. Having also spent some time in the UK, moving to the Cotswolds was an obvious choice. “It’s the Hamptons without the water,” she adds.

The pair’s experiences have poured into D’Ambrosi, a hearty slice of America within a quaint flower-filled emporium, where copper pans line the walls and shelves are filled with chic stationery and gourmet foods sourced on sojourns to Italy and France. “As we needed to make a life change, I wanted to make foods without having to chain myself to a kitchen oven in the evenings,” says Andrew of their concept of “gourmet food on the go”, which he prepares using locally sourced and sustainable ingredients. “The idea is that you don’t have to be in the kitchen any longer than 20 minutes, so you can see your family, or be present when entertaining.”

On the menu are delights such as low-and-slow American-style BBQ ribs and saucisson en croute. “It’s pretty much a culmination of all my efforts in restaurants, and with each dish, I had to think, ‘How easy can I make it for customers? Will it stay delicious?’” says Andrew. “Since the start, we’ve offered a cavolo nero caesar, which has a really delicious sauce. We’ve always kept crackling pork belly on the menu; ribs, obviously, they are smoked all day and fall off the bone.”

Is this a taste of American cuisine? “It’s American because it’s a melting pot,” says Andrew. “I don’t do too much fusion food, but I like a lot of Latin American flavours and do a lot of Peruvian cuisine or even Cuban or Puerto Rican.” Jesse cuts in: “Andrew grew up in Miami so he had all those island influences and the Latin food is absolutely incredible down there.”

What is certainly all-American is their dedicated selection of kitsch US staples such as Milk Duds and Hot Fries – a surprise hit. “I just got a few treats for Thanksgiving one year, which I thought would be fun and nostalgic,” says Jesse. “It’s the things that you remember as a child. Every time we get a big shipment, it disappears within about a week or two.”

Jesse is the creative brains behind the business. A trained interior designer, she oversees the bespoke flower arrangements (subscriptions are offered when in season); the candles poured by hand into marble pots to mask the smell of cooking; and the general convivial ambience.

HTSI
Cult Shop: a Jaipur jeweller’s fit for a princess 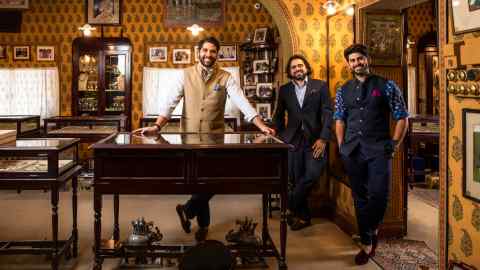 What Jesse and Andrew bring to the table as a duo enables them to offer something unique in the Cotswolds and they are now rolling out the same concept in London, having just secured a venue on Hollywood Road in Chelsea. “It will be a similar concept but with some seating and coffee,” Jesse says, then laughs: “But who would have thought my ranch corn nuts would fly off the shelves?” Andrew agrees: “Nor the Hot Cheetos! But I think we’re needed. There is no one here, or anywhere else, that can do what we do.”