Accept & continue
Manage cookies
How To Spend It Style

How I Spend It: Peter Marino, architect, artist, apiarist

Unlike my day job – architecture, which tends to be somewhat fixed – there is nothing fixed about gardening. It’s the antidote to modern life and keeps me from going crazy. The only thing that’s certain is that by next spring 20 per cent of your garden will have changed. Either one or two trees will have been blown out by a nor’easter – as happened to me last summer – or the crocosmia won’t come back because it didn’t thrive in winter. Gardens are worse than children. You want to use the Austin Powers line on them – “Oh, do behave!” – but they don’t.

Growing up in Douglaston, Queens, I often visited Westbury on Long Island – F Scott Fitzgerald territory – and its extraordinary gardens always impressed me. Now my wife and I are lucky enough to own an old estate in Southampton that once belonged to the Straus family of Macy’s department-store fame. Every Saturday, with the help of a crew, I tend to our garden for 12 straight hours. I approach it much like a painter; I want it to look a certain way and the plots are my three-dimensional canvases. Because we are surrounded by the water, it never freezes here and I can have crepe myrtles from South Carolina, marvellous magnolias and camellias, all of which thrive because of the temperate location.

One of the most rewarding elements of our garden are the bees. About 15 years ago there was a scourge of American mites that were killing thousands of bees in the US. Everyone who had more than 10 acres on Long Island was contacted and asked if we would be kind enough to take a hive because there was such a bee shortage. So, we thought, why not? We started with one or two hives and are now up to seven, which produce seven litres of honey a year under my own label. The whole process is kind of fun. I don’t do it all as they require a lot of work, but a professional beekeeper visits once a week.

I said I wanted, ‘Just normal garden bees.’ The serious bee people rolled their eyes at me

Did you know bees have nationalities? Our best honey producers – this is, of course, nationalistic of me – are the Italian bees. I didn’t realise there was a whole catalogue of different bees, so when I was asked what kind I wanted I said, “Just normal garden bees.” The serious bee people rolled their eyes at me. I have learned so much about them since, and about their importance to our ecosystem. Bees are quite fragile, which growing up you don’t realise. As a child you think, “Oh, let’s avoid them because I don’t want to get stung,” like Winnie the Pooh when he grabs all that honey. But they’re very susceptible to cold, and if the queen gets attacked by a certain virus, then there she goes, with thousands of her worker bees also gone in just two days. We get a bit protective of them and will ask, “How is the queen in Hive #5? She doesn’t look like she’s doing that well,” and extra attention will be paid to make sure that she is thriving.

How To Spend It
Sean Bean slays it in the garden 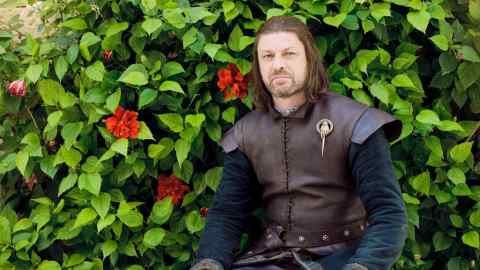 My daughter is a wine sommelier, though unfortunately we can’t grow vines on Long Island because it’s just too damp. I didn’t know that there’s this whole category of honey tasting, much like fine wine. A chap I met in Europe – he was Swiss – tasted my honey and said, “Obviously this comes from a fruit orchard.” This was way more refined than I’d expected, and of course he was absolutely right. Our hives sit behind the peach trees next to the road. In spring, the bees love the fruit trees – apricot, pear and Ponderosa lemon varieties – while it’s the water lilies and lavender in summer. In autumn, abelias are their favourites. Just like every aspect of the garden, they are seasonal.

This article has been corrected. It originally stated that Peter Marino grew up in Westbury, Long Island.