We’ll send you a myFT Daily Digest email rounding up the latest Agriculture news every morning.

When South African rooibos tea became the first African foodstuff to join French champagne and Cypriot halloumi on the EU’s “protected designation of origin” list this year, it was only the latest landmark for one of the country’s most distinctive exports.

The reddish, caffeine-free drink — rooibos means “red bush” in Afrikaans — has become increasingly popular with global consumers in recent years. In 2019, exports reached 7,700 tons, up from 6,600 tons in 2013, according to the South African Rooibos Council, a trade body.

The origins of this burgeoning industry lie in the Cederberg mountain region, 250km from Cape Town, the only place in the world where rooibos grows in the wild — nurtured for centuries by communities of South Africa’s indigenous Khoi and San peoples.

Because of this unique heritage, rooibos cultivation in South Africa has become a model for ethical sourcing of agricultural produce and for sharing the benefits of biodiversity with local communities.

“I grew up with rooibos,” says Barend Salomo, managing director of an organic tea-growing co-operative in Wupperthal, a small town in the Cederberg. Its members comprise Khoi and San farmers, some of them third- or fourth-generation. “It’s in my veins, in all of the community members,” he explains.

Rooibos was long looked down on as “a poor man’s drink”, Salomo recalls — but, when it became sought after worldwide, “they built an industry on this knowledge of ours”.

Today, large plantations account for almost all of South Africa’s rooibos production, which hit 20,000 tons in 2019-20 — supporting enough sales worldwide to brew 6bn cups of tea. The Wupperthal co-operative’s produce is prized for its quality.

In 2019, the wider industry officially recognised the contribution of traditional knowledge to rooibos growing for the first time, agreeing to hand the economic benefits back to the Khoi and San communities through a revenue-sharing deal.

That agreement reflected the attitude towards biodiversity enshrined in the UN’s Nagoya Protocol — a 2010 treaty that aims to bring about “the fair and equitable sharing of the benefits arising from the utilisation of genetic resources”. But it also shows the difficulties of implementing such arrangements.

Under the deal, the tea industry pays 1.5 per cent of the farm-gate price of all the rooibos it acquires into funds that are administered by the South African government. At about R10m-15m (up to $1m), these annual payments could help fund local access to university education or land purchases.

However, nearly two years on, none of this money has been paid out, due to a state hold-up over appointing auditors for the funds. “All the Khoi and San people are looking forward to sharing the benefits,” Salomo says. “They can’t understand why it takes so long.”

The delay has disappointed many because the rooibos deal was a breakthrough in handing back agricultural resource rights, and recognising traditional knowledge, according to Leslé Jansen, chief executive of the South African arm of Resource Africa, an NGO. As a lawyer, Jansen helped to negotiate the rooibos benefit-sharing deal.

“Access to benefit-sharing is not an overnight thing; it is generational,” she says. “Much of the raw material of the region has been going out without royalties.” This extends far beyond rooibos, Jansen adds: Khoi and San communities “hold traditional knowledge for, if not all, most of South Africa’s high-value plant species”.

Yet, even as the deal promises to make Wupperthal’s tea growers better off, their economic survival is under threat from another direction.

Wupperthal’s very name, referencing Germany’s Wupper valley, harks back to the colonial appropriation of indigenous land. It was founded by a German missionary society, which established a mission station there in the 19th century and subsequently passed it on to the Moravian Church, a protestant denomination.

The church still owns 36,000 hectares of this land, less than a tenth of which is suitable for agriculture. Wupperthal’s tea growers rent their buildings and equipment from the church but it has said that it can no longer automatically renew leases held by the community. It recently asked the co-operative to vacate a key building and to apply for a new lease.

If the co-operative cannot renew, then all the investment its farmers have made to secure organic and fair-trade status for its tea growing could be lost, Salomo says. The Moravian Church did not respond to a request for comment.

South Africa’s ruling African National Congress has dithered for years over how to return land back to those who lost it under colonialism and apartheid. “The use of the land remains an elephant in the room . . . the communities have no land security in place,” Jansen says. “In Wupperthal, it is no different . . . I just see this as part of the broader struggle for land.”

Get alerts on Agriculture when a new story is published 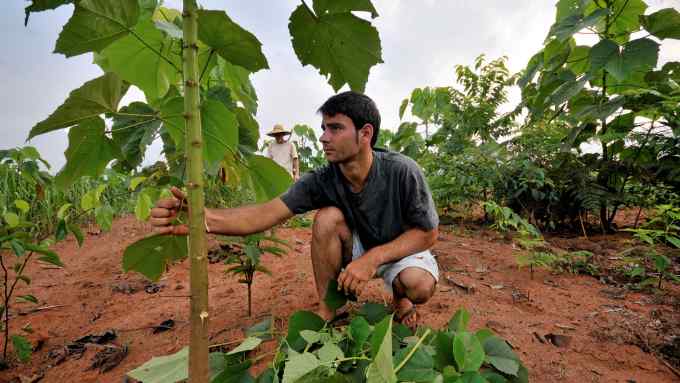