The MA-1 – a flyaway success story

From Air Force to fashion runway, the original aviation jacket has come a long way

There are a lot of great new jackets out there, all based on the same, old, original pattern, but there’s usually one detail wrong. What’s commonly called the “bomber”, reinterpreted by countless designers since it was first perfected for military use in the 1950s, is technically the “flight” jacket. The bomber is a different cut, customarily in leather, with a fur collar. Whole books could be written about the history of both, but fundamentally the blueprint for what we’re seeing currently at Dior Men, Juun J, Rick Owens and Sacai, is the MA-1 flight jacket.

It’s been on a journey: from the military to the street in the ’70s, adopted by ska-loving skinheads – tired of their default Harringtons – and then gay men who wanted to shift from the leather look that had gone from Brando cool to YMCA. It became part of the ’80s club-land uniform – usually in matte black and worn with matching 501s, steel-toecap Dr Martens and a rubberised rucksack – while Soho was a sea of boys and girls who pinned badges, patches and Polaroids to their MA-1s.

Military clothes have always been about masculine allure

“We have MA-1 jackets from Vivienne Westwood, Liam Hodges, Calvin Klein, Junior Gaultier, CP Company, Raeburn, Paul Smith, Burberry, Left Hand and even Tommy Nutter for Austin Reed,” says Professor Andrew Groves, founder and director of the University of Westminster Menswear Archive, of its popularity throughout history. “Apart from a pair of Levi’s 501s, I can’t think of a more iconic garment, with a design language that is so strong that all of these creatives can reinterpret [it] while still maintaining its instantly recognisable aesthetic.”

Raf Simons has riffed on the MA-1 since the early days of his career. The camouflage jacket he created in 2001, with patches depicting David Bowie, the Manic Street Preachers, Joy Division, Japan and Bauhaus, is one of the most highly prized – and priced – pieces of vintage fashion in existence (expect to pay between $30,000 and $50,000); hence its elevation to ultimate street-style status symbol, seen on the backs of Drake and Kanye. Today, Simons’ flight jackets are more simple – at his own brand, they’re in classic black, and at Prada, oversized and belted at the waist.

Guy Berryman, the Coldplay bassist who launched his utilitarian menswear label Applied Art Forms last year, has made his own version for autumn, featuring a detachable utility vest with myriad zips. “I love the flight jacket because it mixes elements of utility with connotations of subculture simultaneously,” says Berryman, who has been wearing a prototype on stage. “I’m fascinated by how it has evolved. I think the version that Issey Miyake did for men in 1996 was one of the most significant developments we’ve seen to date.”

The Miyake “Parachute Cargo” jacket that Berryman refers to, covered in modular pockets so bulky that it resembles a flotation device, appears frequently on resale sites, ambitiously priced from $2,000 upwards. Other sought-after vintage versions include anything by Jean Paul Gaultier from the ’80s – especially his cropped designs – and Vivienne Westwood’s “Clint Eastwood” jacket, which first appeared as part of her AW84 collection, with four pockets layered on the shoulders, two at the waist, and elongated knitted elements on the ends of the sleeves and around the hips. The shape is extraordinary – a fantastic piece of engineering as well as a standout example of unisex design. While Westwood’s first versions echoed the classic MA-1, with a blue outer shell and bright orange inside, the “Clint Eastwood” has reappeared numerous times over the decades, each time in a new fabrication, with different patterns.

Much of the MA-1’s mainstream success, though, is down to Alpha Industries, the American company that was awarded the contract from the military for their construction in 1961, and then went on to offer them commercially from the ’70s. Today, Alpha Industries’ styles are still made with bright orange lining – a feature the military originally used so the jackets could be worn inside-out for maximum visibility should disaster strike. And they are still the go-to for collaborations. When Vetements created a flight jacket for SS17, Demna worked with Alpha Industries to create something authentic, but in his customary sumo-proportions. Similarly, Matty Bovan worked with the brand for his AW22 collection, with supersized styles handpainted in Bovan’s typically upbeat and playful way. “It’s the idea of archetypal pieces seen through my eyes and taken to the extreme,” says Bovan. “Secret words, meanings and symbols layered into a mass of paint have always been important and integral to my work.”

Other young London-based designers to riff on the flight jacket this season are Charles Jeffrey Loverboy, known for his hallucinatory patterns and colourful collections, and JordanLuca. “Every season I’m quick to lambast the idea of doing it again,” says co-founder Jordan Bowen, “but the ubiquity of the design makes it a mainstay. We rework the proportions each time. Previous collections have seen laser-printed versions, hand-smocked sleeves and one in cracked mushroom leather that we made for GucciFest in 2020, full of big, boxy 3D pockets. There’s a conflict of power and class associated with a flight jacket, which we played into this season with the contrast-colour inserted sash. It’s a new form of regalia.”

But it’s Rick Owens who is the master of the remixed MA-1. He first introduced it to his canon for SS06, fitting perfectly with his all-black, Berghain aesthetic, and has since warped it, with elongated sculpted chiffon shoulders, or made it engulf the wearer. As part of his AW22 menswear show, Owens designed oversized flight jackets that are cut to appear slashed just above the elbow, creating billowing folds down the arm. The result is something that looks like modern armour, with a visual thread that goes right back to its Air Force origins. “Military clothes have always been about masculine allure,” says Owens, “and they have evolved to project a stoic heroism. The MA-1 has the added attraction of suggesting an idealised torso and arms.”

The Aesthete
Jonathan Saunders: ‘Whatever you do, do it to the nth degree’ 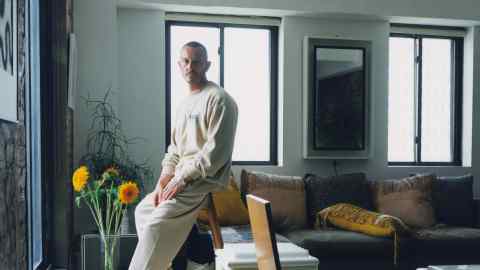 The perennial appeal of the MA-1 jacket is that no matter the sizing or cut it looks casual, it flatters the body, and it’s sexy. It comes with cultural baggage that makes it inherently cool. Deconstruct it, hand-paint it, cover it in badges, or call it a “bomber” if you want – it can take anything you throw at it. It’s designed for combat. And it always looks good.