The Italian government last year rescued the world’s oldest bank, which had to agree to a restructuring programme with EU authorities that included branch closures. But Italy’s anti-establishment Five Star Movement and far-right Northern League said they would “redefine the missions and objective” of the bank, in their contract for government published last week.

The bond market selling has been concentrated on a specific type of debt sold by Monte Paschi, the bank’s 10-year tier 2 bond. This form of debt counts towards a bank’s capital ratios and Monte Paschi had planned to sell a further €700m of such paper before year-end to strengthen its balance sheet.

But the price for its current €750m issue has tumbled to less than 91 cents on the euro — equating to a yield of 7.8 per cent — having been sold at a yield of 5.375 per cent in January. These poor market conditions raises the prospect that the bank will face a sharply higher cost from selling additional tier 2 paper later this year.

However, Filippo Alloatti, a senior credit analyst at Hermes Investment Management, noted that Monte Paschi’s debt is now the highest yielding European tier 2 bond after Bank of Cyprus, which he said could tempt new buyers.

“You have to tread carefully with such a high-risk tier 2, and we do not own any at the moment, but at these levels it gets quite interesting and you have to take a look,” he said.

Another area of concern for fixed income investors is the potential policy choices made by Five Star and the League around non-performing loans. The share prices of bad debt collection specialists such as Cerved and DoBank have fallen heavily this past week. The two parties have said they will repeal laws allowing banks to forcibly recover debts from Italian citizens without judicial approval.

Monte Paschi is in the middle of using a complicated government-backed securitisation scheme to remove €24bn of NPLs from its balance sheet. While the deal would still be successful even if Monte Paschi retained all of the securitisation’s €2.9bn investment-grade rated senior notes on its balance sheet, the lender is looking to sell a portion of these bonds to investors after a government guarantee is granted in the coming weeks.

One Italian NPL banker said he still expected good demand for these senior bonds despite the new rhetoric around bad debt collection. He added, however, that investors would now likely want to buy the notes below face value to provide greater returns. 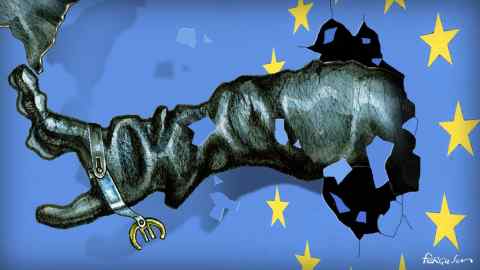 “There are some investors we used to tap for NPL securitisations that will now not even look at new transactions, but to be honest they are in a minority,” he said. “My main concern though is not around changes to debt recovery regulation, it’s about whether the [government guarantee] scheme will be renewed.”

The Italian government’s ability to guarantee the senior notes of bad-debt securitisations is a key pillar of the scheme to clean up bank balance sheets. The programme runs out in September and there is uncertainty over whether the new government will renew it with the European Commission, potentially jeopardising NPL deals that are due to close after this date.

Get alerts on Banks when a new story is published