Where will humans live if Earth becomes uninhabitable?

The Moon, Mars and orbiting colonies are all being explored as possible options

Life in a distant future as imagined by Amazon founder Jeff Bezos will be, in many ways, like life today. People will socialise, commute to work and have weekends to rest.

The only difference is that we will be living in huge spinning cylinders that closely mimic our planet, but are actually in orbit around it.

The world’s richest man, according to Forbes, is one of several prominent people who are thinking seriously about what humans might do if they ever have to develop habitats beyond Earth.

Mr Bezos’s vision is based on ideas first put forward in the 1970s by the Princeton scientist Gerard O’Neill. He proposed that humans could live in a set of twin cylinders, each measuring four miles in diameter and 16 miles in length. The cylinders counter-rotate so they keep facing the sun.

At a recent event for his space company Blue Origin, Mr Bezos suggested that a series of these colonies could be designed for specific uses: some residential, others for industry and leisure. He even proposed that some cylinders could have a lower gravitational pull so residents could “go flying with your own wings”.

The weather, he said, will be “like Maui on its best day, all year round”, referring to the picturesque Hawaiian island.

“Imagine what architecture would be like if it did not have to fulfil its primary purpose of shelter,” he told the event in Washington, DC, in May this year.

Mr Bezos is not the only person exploring the idea of living in space. As the effects of climate change become more apparent, governments, scientists and entrepreneurs across the world have started looking more seriously at concepts that were once considered more within the realm of science fiction.

“People have always shown they will do what is necessary to survive,” says Therese Griebel, deputy associate administrator for programmes at Nasa’s Space Technology Mission Directorate. “If the Earth becomes unsustainable, there will be a reason to go somewhere else.”

Other plans to live in space take various forms. Ms Griebel predicts humans could live sustainably on the moon by 2028, if Nasa can find a way for us to survive the freezing lunar night. SpaceX founder Elon Musk, meanwhile, prefers the longer-haul option of Mars.

The main challenge for any proposal is to find a way to extract resources from wherever humans choose to live. On the moon, this is likely to mean using the ice found recently at its poles and converting it into water, oxygen and hydrogen for fuel.

ISpace is just one of a handful of companies which thinks that such an opportunity could be turned into profit. The Japanese company says it has raised nearly $100m in its quest to get to the moon and start mining it. Its founder and chief executive, Takeshi Hakamada, says this will be the first step towards setting up a permanent colony there.

“The biggest hurdle to living in space is finding the resources needed to fuel your transportation needs,” says Mr Hakamada. “You need a lot of propellant, so mining the moon is the best way to get that.”

The company plans to land on the moon in 2021: Mr Hakamada predicts there will be a community of at least 1,000 people living and working there by 2040.

Mining the moon is also a crucial part of Mr Bezos’s plan. He has promised to sell $1bn worth of his stock in Amazon every year to help fund Blue Origin, which is planning to land on the moon by 2024.

Even among space enthusiasts, however, there is some scepticism that moon mining could ever work.

Al Globus, a former contractor at Nasa, is a proponent of O’Neill colonies, but believes the materials will have to come from Earth rather than another planetary body. “Mines fail on earth all the time,” he says. “I don’t think we are going to get it right on the moon, especially not first time.”

Some think that neither the moon nor purpose-built colonies will ever be big enough to house humanity should Earth’s resources run out. Mr Musk could counter this with his plan to fly humans to Mars in the next five years as the first step in the planet’s slow colonisation.

He says he can overcome Mars’ cold conditions by setting off nuclear explosions in its atmosphere — a plan he has referred to as “nuke Mars”.

Critics say these schemes are the idle fantasies of middle-aged men, which threaten to distract from attempts to solve climate change on Earth. Emily Cunningham, an Amazon employee, told Mr Bezos at the company’s annual shareholder meeting this year: “Our home planet Earth, not far-off places in space, desperately needs bold leadership.”

ISpace predicts it is likely to cost up to $10bn just to start producing fuel from the ice on the moon, making heavy government investment a necessity — something that seems unlikely given the more immediate domestic problems most developed countries are trying to solve.

Some involved in space research, however, predict that as early experimental missions start to yield results, public and governmental interest in interplanetary living will grow, giving it the impetus it needs.

Ms Griebel says: “Once you start building the infrastructure to extract resources from the moon, you will be able to sustain people for longer and longer. It becomes more real as you start to do it.”

Get alerts on Space exploration when a new story is published

Explore the Special Report
READ MOREHow we will live in 2050
Where will humans live if Earth becomes uninhabitable? 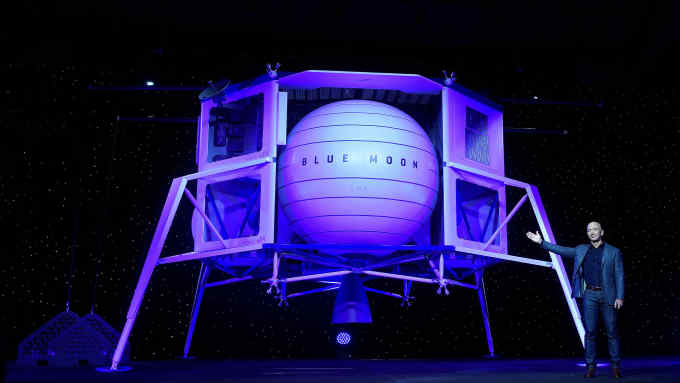