Officials in Moscow will be hard pressed to halt a collapse in the rouble. Here’s why.
Joseph Cotterill 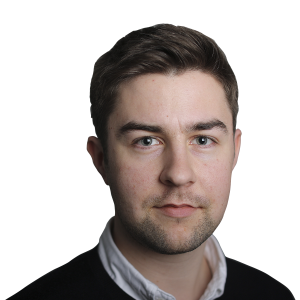 The Central Bank of Russia’s substantial reserves stockpile was meant to maintain the currency’s stability in the face of market panic.

The reserves — worth $630bn, as of the end of January — are made up of assets and deposits denominated in the world’s major currencies (that is, the dollar, euro, sterling and the yuan). As well as almost 2,300 tonnes of gold.

The stockpile was there so that the central bank could intervene in foreign exchange markets, shoring up the rouble in the event of volatility. There’s a Jedi mind-trick aspect to building up reserves too — if markets know you’ve got a load of them, they’re less likely to challenge you to use them.

The sanctions imposed by the US, EU and UK against the central bank are likely to render a lot, if not quite all, of these reserves useless. To understand what the CBR is, and isn’t, likely to have at its disposal when the banks open tomorrow morning, it’s worth taking a close look at what’s known as the “Data Template for International Reserves and Foreign Currency Liquidity”.

The snapshot below was taken from the Twitter account of former Alphavillain Matthew Klein. We tried to find the official data on the central bank’s website, but it was no longer available.

Securities make up a little more than half ($311bn) of what the CBR had at its disposal. According to its annual report, these assets were mostly highly rated, with just 6.8 per cent of them holding less than an A rating.

Given their high ratings, most of them will probably be highly liquid and easy to sell in times of panic. But how does the Russian central bank turn these securities into cash in the event that it needs access to dollars or euros fast? Well, it needs to rely on global finance.

Here’s how Ousmène Mandeng, a visiting fellow at the London School of Economics and Political Science who has spent decades working in the field of central bank reserve management, explained it to us:

Foreign exchange reserves are not held by central banks. Securities and money never move, everything is external . . .

In the case of securities, central banks would ask their brokers to sell the asset in question . . . In the case of, say, a German government bond [that the CBR owns], the broker in Frankfurt will call other brokers to announce the sale and, once a price is agreed, will instruct the custodian of the security to transfer it to the buyer. Upon receipt of payment into a bank account, typically in Frankfurt, the custodian will instruct the central security depository to assign the buyer as the new owner. The central bank’s then credited the proceeds at their account with the broker.

The proceeds could then be used to instruct the broker, or foreign exchange dealers, most of whom are in London, to buy the rouble at a specific rate. The seller will usually be a Russian commercial bank. Seller and buyer may well share the same correspondent bank. Once the purchase is made, the Bank of Russia would instruct its correspondent bank to credit the seller’s account with euros.

Stopping the central bank using its securities to stabilise the rouble would, therefore, involve instructing the financial intermediaries that feature on this chain — brokers, custodians, central security depositories, foreign-exchange dealers, and correspondent banks — to freeze assets and stop acting on behalf of the central bank.

Judging by its recent behaviour, there’s much to suggest the US will be willing to do just that. In recent years, Washington has often furthered its foreign policy through what’s referred to as the “weaponisation of finance”. What that has meant in practice is using the dollar’s global dominance to cut the monetary authorities of Iran, Venezuela, and (most recently and very controversially) Afghanistan off from access to their own reserves.

There is a paradox at play here, between what the US is willing to do to its political enemies and the rules for the private sector. Sovereign immunity normally protects a foreign central bank’s assets, usually held at the New York Fed, if they are “held for its own account.” That balm has, however, been tested over the years in various US lawsuits against defaulting governments, as bondholders spied rich pickings in their foreign-exchange reserves. Yet none of those lawsuits has gone as far as the US government’s evermore frequent targeting of the central banks of its enemies.

In targeting central banks, the authorities have invoked counter-terrorist and human rights legislation, alongside the US International Emergency Economic Powers Act. The latter in particular has proven a potent measure.

The most direct way to sanction the CBR will be to put it on the so-called Specially Designated Nationals list, which despite its name includes institutions not just individuals. This would bar US entities from dealing with them. When it comes to dollar access, that would put to a stop to every step of the process outlined by Mandeng.

The second chunk of reserves the CBR holds are in the form of currency and deposits. These are worth $152bn. Of this $152bn, about two-thirds is held in official institutions. That includes other central banks, the Bank for International Settlements and the IMF.

Central banks in the Eurosystem, where about a quarter of the CBR’s assets are held, have already frozen the central bank’s accounts. The European Central Bank has said it will implement all sanctions decided by the EU and European governments. Joachim Nagel, the Bundesbank’s president, said earlier today that he “welcomes the fact that comprehensive financial sanctions have now been imposed and has campaigned for them.”

The BIS said: “[Our] policy is that the institution does not acknowledge or discuss banking relationships. The BIS will follow sanctions, as applicable.”

It’s unclear how other authorities will behave. Notably China. According to the CBR’s annual report, as of the start of 2021, 14 per cent of foreign exchange reserves were held in China — the biggest share for any one state. Almost 13 per cent of the reserves are in yuan or assets denominated in yuan.

Mandeng says that China may offer a means for Russia to continue trading with at least some parts the world:

Russia may accept payments for its exports in renminbi and increase imports paid in renminbi from China and possibly other countries accepting renminbi. As renminbi-based payments will most likely be conducted by institutions outside the immediate influence sphere of the West, this would work.

The other third of the CBR’s deposits are held at private banks. Again, it’s impossible to say what share of this $57bn is held in the US, UK or EU. But as almost 60 per cent of the CBR’s reserves are in either dollars, euro or sterling, it’s fair to guess that it’s more than half.

Financial intermediaries in the rest of the world may also not want to deal with the CBR, even if they are not directly covered by the sanctions. When the US puts you on its blacklist, it can have a chilling effect. Famously, Carrie Lam, Hong Kong’s leader, resorted to “piles of cash” after local institutions were reluctant to bank her and other city officials who came under US sanctions.

And then there’s gold, the historical favourite of central banks worldwide. Including Russia’s monetary guardian. The CBR’s holdings are large — the fifth largest in the world — and, according to industry trade body the World Gold Council, they’ve been among the biggest buyers of late. According to its annual report, the entirety of the $130bn-worth of bullion is all stored in vaults within the Russian Federation.

Holding all your gold this close to home is unusual. Most of the world’s central banks keep a large portion in vaults beneath the Bank of England’s headquarters in Threadneedle Street, or close to Wall Street, in the coffers of the New York Federal Reserve. The reason being that the City of London and New York are the twin centres of the global gold market, making it easier to buy and sell bars.

Holding the gold in Russia, and not in London or New York, will make it more difficult for the central bank to dispose of it in large quantities. At the same time, having it close to home makes it very difficult for the US, UK and EU to successfully impose sanctions on Russia’s bullion. Financial pariah it might be, but people who know the market believe it would be foolish to assume that Russia will be entirely frozen out. The lure of gold has been an ever-present throughout history — particularly in periods of geopolitical uncertainty. If Russia is selling below market rates, then we think someone, somewhere will be willing to take the risk.

We’re not going to pay too much attention to what else the CBR may, or may not, have at its disposal come the morning. SDRs or a few billions in banknotes are not going to halt a currency’s collapse.

Think differently? Thoughts in the usual place. Along with any guesses on where the rouble will end the day tomorrow.