Volvo Cars has signed a multibillion-dollar deal to buy electric car batteries from two leading Asian manufacturers to supply the company until 2028.

The deal with Chinese battery manufacturer Contemporary Amperex Technology (CATL) and South Korean chemical group LG Chem is the latest by a carmaker to secure battery supplies into the future.

Hakan Samuelsson, chief executive of Volvo Cars, will announce the deal on Wednesday at the FT Future of the Car Summit in London.

Volvo wants half of its sales to be fully electric by 2025, which combined with its growth forecasts, mean it would sell about 500,000 battery cars a year by the middle of the next decade.

“We need two suppliers because these are huge volumes,” Mr Samuelsson told the Financial Times ahead of the conference, adding that the capacity of batteries ordered by Volvo was “more or less the same amount of batteries as the whole of the global supply last year”.

The chief executives of Jaguar Land Rover and Bentley are also due to speak at the summit on Wednesday, as well as Greg Clark, UK business secretary.

Carmakers are scrambling to secure battery supplies, in order to support the planned ramp-up in electric car sales as they face growing demand for the vehicles and tighter emissions rules across the world.

Volkswagen, which aims to sell 3m electric cars a year by 2025, is spending €50bn securing access to batteries, while Daimler is spending €20bn over the next decade.

Volvo said that every new model from this year would contain hybrid or electric technology, with the plans for its first full-battery vehicle to be an electric version of the XC40 sport utility vehicle.

Using both CATL and LG Chem gives the company flexibility, as well as allowing Volvo to skirt tariffs that may be imposed on Chinese exports because of the trade war with the US.

It plans to use supplies from both companies in each of its major regions, and across its model line-up. 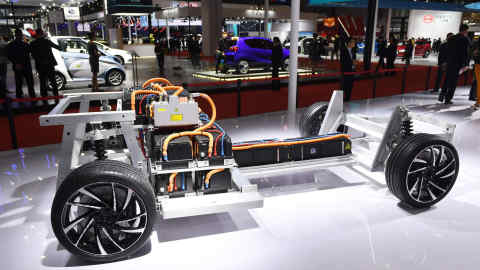 Volvo at present buys batteries from LG Chem for its hybrid models, which account for about 10 per cent of its sales.

The plan under the new deal will see LG Chem and CATL provide battery modules to Volvo, which will assemble them into packs at the Swedish group’s facilities.

Typically, carmakers want battery packs and the vehicles they power to be made close together, because of the weight of the packs and the cost of transporting them.

Volvo is already making the first battery assembly line at its Belgian facility in Ghent, where the first electric XC40 will be built.

The batteries supplied to Volvo will also be used in its Polestar cars, the electric sub-brand launched by the company last year, though not by its parent company Geely or its other brands that include Lotus and Lynk & Co.