We’ll send you a myFT Daily Digest email rounding up the latest HS2 news every morning.

We’ll send you a myFT Daily Digest email rounding up the latest HS2 news every morning.

The cost of the HS2 high-speed railway line has eaten into the project’s contingency fund by £1.7bn over the past year, as Covid-19 delays put further strain on the UK’s biggest infrastructure project.

Work was temporarily suspended at most HS2 sites at the start of the pandemic, while social distancing measures have caused access delays and reduced productivity, increasing costs.

Similar pressures have been reported by industry experts in projects ranging from Crossrail and the A303 Stonehenge tunnel to the Tideway tunnel and the Hinkley Point C nuclear power plant.

The costs associated with the first phase of the high-speed line between London and Birmingham have gone up by as much as £800m, according to people close the project.

That follows an £800m increase that was announced by HS2 in October — including money spent on remediating the terminus site at Euston in north London.

The price of the Birmingham Interchange station has also escalated by £100m to £370m even before contractors have been appointed.

One contractor close to the project said that HS2 Ltd, the state-funded body responsible for delivering the railway line, “still doesn’t really know how much Covid has added”.

Opposition to HS2 has also been growing. Last week local anger against the project contributed to a huge swing against the Conservative government, helping the Liberal Democrats win the Chesham and Amersham by-election. The new line is due to run through the Buckinghamshire constituency.

Construction started on the first phase of the London to Birmingham railway line in August last year following more than a decade of planning. But the soaring costs are adding to fears that HS2 will prove a black hole for taxpayers at a time when the Treasury’s finances are already stretched and other much-needed transport improvements have been cut.

The need for additional capacity on the route to Birmingham, which was already contentious, has also been called into question amid predictions that business travel is unlikely to recover as more people choose to work from home.

In February, anti-HS2 campaigners dug a subterranean tunnel at Euston station in protest at the environmental damage caused by the project, including the destruction of woodlands and potential damage to water supplies.

The extra £1.7bn of spending means the project is already drawing on the contingency fund only a year after building on the line was given the go-ahead by prime minister Boris Johnson. 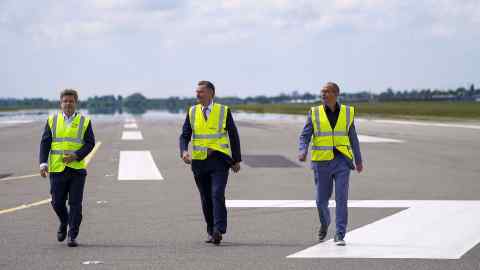 Government officials conceded there had been “unavoidable costs” arising from the pandemic. The Department for Transport said: “Our focus remains on controlling costs, to ensure this ambitious new railway delivers its wealth of benefits at value for money for the taxpayer. The response to Covid-19 remains ongoing and final assessments of its effect have not been made.”

The cost is expected to escalate further as key parts of the project have not yet been agreed. At the Euston terminus in central London, there is still no workable budget or design that will enable the new trains to get into the station — despite the extensive demolition work and relocation of nearby residents.

A National Audit Office report last year warned that planning on the railway was at such early stages that it was almost impossible to predict the final costs.

Although the official budget for the entire line is £98bn in 2019 prices, a review last year led by civil engineer Doug Oakervee into whether the project should go ahead put the cost at not less than £106bn.

In December, Oakervee admitted that his decision to recommend that the project go ahead was largely based on the fact that £9bn had already been spent on preparations for the railway line as well as concerns for the construction industry.

This article has been amended to make clear that the £1.7bn in additional costs are being met within the project’s phase 1 £4.3bn contingency fund, and that the funding envelope for phase 1 is £44.6bn.

Get alerts on HS2 when a new story is published