For Armani AW19, the 84-year-old maestro’s got the blues

Now the most venerable designer still working, Giorgio Armani’s show was a tonal homage to his signature style

Giorgio Armani is now unrivalled as fashion’s grandest fellow. With the death of Karl Lagerfeld, and most other founder designers long retired, the 84-year-old has this week assumed his position as the most venerable designer still working. And how.

The chairman and president of the Giorgio Armani Corporation, he has lead his namesake brand since 1975 and accrued a personal fortune of $8bn in the process. His brand, meanwhile, has become a fully realised lifestyle, including lines of homewares, a hotel chain and restaurants in the mix. Armani’s design signature has always been writ large. He “invented”, or certainly exported and laid claim to, the fashion for soft-shouldered Italian tailoring, while his womenswear has always balanced a simple aesthetic, and a yearn for easy elegance, with moments of flair. His short, neat, sculptural, often collarless jackets are still a shorthand for business casual while his gowns remain a red-carpet staple.

The shows are also a unique experience: darkly lit, packed with clothes and often glacially slow. Armani likes for looks to be delivered in the old catwalk tradition, the models still make eye-contact with the audience, and often do a twirl. The AW19 show, which combined the women’s and men’s collections, was a “rhapsody in blue”.

For women he showed deep velvets in midnight navy, little jackets with a ribbon of lapiz running through, woven blazers and a swirly wavelike print. A jodhpur-style trouser shape predominated, exaggerated at the hip and then lean through the calf. The men got navy puffas and every kind of suiting — in any colour as long as it was blue.

Yes, Armani shows can be a little dated. The ruffled bag straps, textured peplum belts and swirling rose motifs were tricky. But in its tonal homogeneity, it all worked rather well. It would have been even better had the women worn some of the menswear: in a week already strong in tailoring, a bit more gender blending would have made the show more modern and re-asserted the authority of the famed Armani suiting. But that’s not how things were done at the Armani Silos, the huge exhibition space dedicated to the designer’s archive that was opened for the show. Armani will always do Armani as he wants to. And who are we to argue. He’s doing very well. 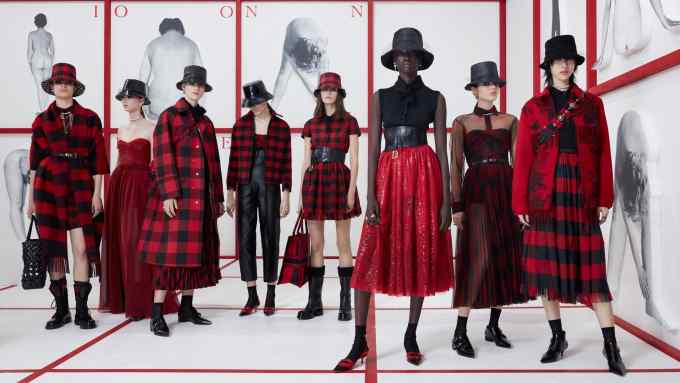