When the artist Taloi Havini was in her twenties, she recorded the men on Buka — the pacific island she calls home — and the rhythmic chants, handed down over generations, which carried them across the ocean. “I’m 40 now, and I’ve been hauling those recordings around like gold ever since,” she says. The men are long gone, but the chants have finally surfaced in a sound installation that Havini has created for an exhibition in Venice. “I went back into my sound archive and conjured up my ancestors and told them ‘You’re going to sing in Italy’,” she says. “They are playing across time.”

We are talking over the phone — 7pm in Brisbane where Havini is currently based; 10am in London for me — grappling with the confusing facts that not only am I writing about an exhibition to which I have only digital access, but Havini herself (like many other artists in 2021) had to install remotely a show in Venice from a city in Queensland and has not experienced it in real life. In a strange, pandemic-induced reversal of convention, where it used to be the artist who saw their show first, now it is the audience.

The exhibition is taking place at the church of San Lorenzo, whose origins date back to the ninth century. Even by Venetian standards, it’s an exceptional building with an unfinished facade and a double altar. It is now the public venue of Ocean Space, a centre for exhibitions established by the TBA21 — Academy, a ten-year-old non-profit initiative that brings together artists, scientists and commentators to highlight the Anthropocene effect on the ocean.

Inside, visitors first pass through a state of the art exhibition devised last year by London-based architects Territorial Agency. It is made up of a series of screens where big data about shipping lanes, drug routes, bird migration, overfishing, deep-sea mining and melting ice — derived from GPS, satellites, sonar scans and climate models — is visualised as constantly mutating lines and bursts and flashes of colour.

Beyond it lies Havini’s deeply contrasting world of sound, soft and immersive, where a 42-minute cycle of voices, drumming, chanting, flutes, birdsong and underwater ocean recordings swirls through the space from a circle of 22 speakers. This is mapping of very different kind. There is no imagery, but deep blue carpets, softly billowing ultramarine drapes and a raised platform in the shape of Buka Island. “I am inviting you to my land,” she says. “Somehow Taloi has managed to create a hospitable and convivial setting, and it decelerates visitors,” says Markus Reymann, TBA21 — Academy’s director. “It feels warmer in the space, and the air is thicker. It’s like being in warm water.” She responded, he continues, to the original intentions of the space, as a place in which choral works would be heard. This week, Ocean Space has also launched a three-day programme of events to coincide with the opening of the 17th Venice Biennale of Architecture.

This is Havini’s first major solo show in Europe. Her first one in Australia, called “Reclamation”, took place last year at Artspace in Sydney, and explored her people’s intense and circular connection to the land. Chus Martínez, the artistic director of Ocean Space, travelled to Sydney especially to see it. “I knew it was something important,” she says. “We had been talking about the Pacific and its geography. But here was someone with real knowledge.” The Academy organised for Havini to spend several weeks sailing in the Pacific last year on the Schmidt Ocean Institute’s research vessel R/V Falkor. (The objective of the institute, an initiative run by the former Google CEO Eric Schmidt and his wife Wendy, is to thoroughly map the ocean floor by 2030.)

Havini describes being at sea as “being on a huge chunk of metal and living in some very small spaces.” She made underwater recordings at different depths. “They sound like morse code,” she says. “But I spent time with the crew and the scientists on board telling them some of the stories passed down by my ancestors,” she continues. “The scientists talked a lot about the last glacial maximum, 22,000 years ago, and they were surprised by the level and extent of my ancestral history which goes back to that time. They were surprised by this correlation between history and science and storytelling, and how indigenous people used, and still use, the same skills of observation and data capture.” Her installation at Ocean Space, titled “The Soul Expanding Ocean #1”, is a delicate elaboration of her people’s deep connection to the sea.

Havini was born in Buka, one of the islands that makes up the Autonomous Region of Bougainville in the South-West Pacific. Her indigenous father Moses and Australian mother Marilyn were both involved in the decolonisation movement of the islands from Papua New Guinea, and in 1990 moved the family to Australia when life in Bougainville became too dangerous. “I was the youngest child,” says Havini, “and growing up with activist parents, I got dragged to a lot of long, boring political meetings. That’s when I learnt to have imagination.” When the family returned to Buka ten years later, their house was gone, and the devastation of civil war was everywhere. “We had to rebuild. I realised how lucky I was,” she says. Shortly afterwards, she went to art school in Canberra.

She now moves between Australia and Bougainville, where in 2019 a landmark referendum saw 98% of the population voting for independence. She also used the occasion to involve local people in making work for “Reclamation”. Using the traditional construction techniques of lashing canes together with bindings, her community created a series of sculptures which are like drawings in air, or maps, or codes. They were installed in Sydney in a thick carpet of Bougainville soil.

“We don’t have monuments in Bougainville, but we do have structures,” Havini explains. “There is none of the monumentality that prevails in the west. When things break down, we repair them. If nature destroys a building, we make a new one. We build structures for ceremonies, then burn them down. Monumental events in life have no physical aftermath, but they remain in the collective memory.”

This solubility permeates her culture in other ways, where the binary divisions of the west do not exist. Land and people — and indeed ocean and people — are indivisible. In this matrilineal society, mothers and fathers have interchangeable roles. “I’d never experienced the dialectic conditions of the west until we went to Australia,” she says.

Now Havini has brought this circular and soluble sensibility to Venice, a city whose natives used to have an equally codependent relationship with the ocean. In the church of San Lorenzo, a building that was created for sound and mystery, she has invited a new audience to step into her world. “All I’m asking is for people to come in and do some deep listening,” she says. “We’re so absorbed with our eyes, but if my ancestors understood the meaning and mapping of sound, we can too.”

‘The Soul Expanding Ocean #1’ is at Ocean Space, Venice, to October 17; ocean-space.org 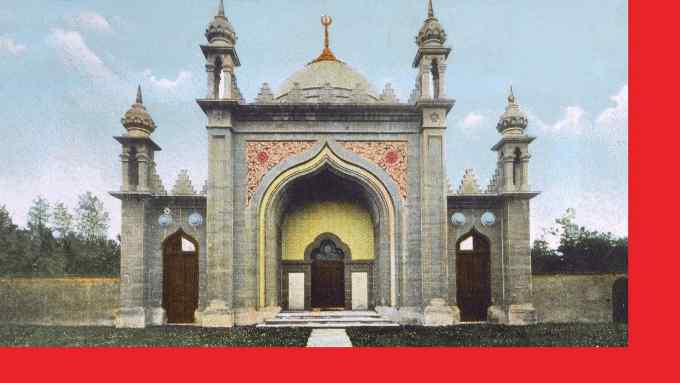