Airbus pushes ahead with aggressive plans to increase production

Airbus is pushing ahead with aggressive plans to increase production of its popular A320 family of jets as Europe’s plane maker shrugs off concerns over the war in Ukraine and strains in global supply chains.

Chief executive Guillaume Faury said the company would increase output of the narrow-body aircraft by 50 per cent to 75 a month in 2025 amid strong demand from airlines coming out of the pandemic. Airbus is already in the process of increasing production to 65 a month by the summer of 2023.

The move will cement Airbus’s dominance over US rival Boeing. The main driver of the recovery has been in the single-aisle or “middle market”, where Airbus already had a significant advantage before the crisis, as airlines have clamoured for the medium-sized jets for domestic routes as well as international travel.

Faury said the “long-term trends point towards a durable recovery . . . that is underpinned by strong customer demand”. This was despite geopolitical tensions and pressures on global supply chains and logistics, in particular from the Covid-19 pandemic in China,

Airbus plans to meet the higher output rates by increasing capacity at its existing industrial sites, including building a second final assembly line at its US operations in Mobile, Alabama.

Executives said they feared the industry’s supply chain, already hard hit by the pandemic and facing rising raw material prices, would be unable to cope at this point in the recovery.

Airbus last week, however, agreed supply deals with engine makers Safran and MTU for delivery through 2024, signalling an easing of tensions between the companies.

News in-depthTransport
How the world’s airlines took off again 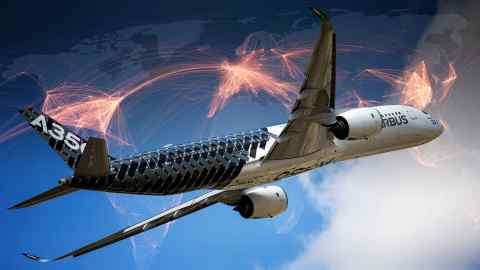 Analysts at Berenberg, nevertheless, cautioned that the monthly goal of 75 jets was an “ambitious target” that was “significantly above current and previously achieved rates . . .[and which] comes amid growing risks in the supply chain”.

Airbus also confirmed earlier reports that the launch of its new, long-range narrow-body, the A321XLR, had been postponed from late 2023 to “early 2024” in order to meet “certification requirements”. Faury declined to comment on the company’s talks with the EU Aviation Safety Agency.

His comments came as Airbus reported adjusted operating profit, a figure tracked by analysts, of €1.26bn in the first three months to the end of March, from €694mn a year earlier. The results were helped by a one-off gain of €400mn from a remeasuring of pension obligations.

Revenues for the period rose 15 per cent to €12bn.

The manufacturer reiterated its previous target of free cash flow of €3.5bn for 2022 before customer financing and mergers and acquisitions, and an increase in adjusted operating profit to €5.5bn, about equal to 2021.

Get alerts on Airbus SE when a new story is published