The dollar has cranked higher in the opening months of the year, a poke in the eye for the bulk of Wall Street analysts who had predicted a decline.

The dollar index, which tracks its value against six other major currencies, jumped 3.6 per cent in the first quarter, its best run since 2018 and a sharp turnround from the 6.8 per cent slide last year. It has since pulled back around 1 per cent.

The still robust year-to-date gains have confounded analysts, whose expectation for a strong global recovery to pull the world’s reserve currency 3 per cent lower this year was one of the strongest consensus calls for 2021. Instead, signs that the US will outperform other major economies have pushed it up.

“The dollar has been strong. That’s not surprising given the amount of pessimism that had gone into markets,” said Jim Leaviss, chief investment officer for public fixed income at M&G Investments, noting that investors had held “big” underweight positions coming into the year.

Some of the first-quarter gains for the dollar were particularly striking. It climbed 7.2 per cent against the Japanese yen, which clocked up its worst month in nearly five years in March. The same month brought the euro’s biggest drop against the buck in three years while the Chinese renminbi’s decline was the biggest since March 2020.

The strong consensus at the end of last year was that loose monetary conditions in the US and a robust global economic recovery would weigh on the dollar by luring companies and investors in to overseas bets and damping demand for the buck as a safe retreat. But it appears that view was already baked in to the exchange rate.

“One of the biggest risks for the year was that every sellside report was saying the same thing, that the dollar would weaken,” said Tim Ash, senior emerging markets strategist at BlueBay Asset Management.

A sharp rise in inflation expectations has jolted that apparently sure bet, picking up particularly in light of the Biden administration’s $1.9tn stimulus package.

The uptick has sparked a sharp sell-off in the bond market, which has in turn pushed yields higher, bolstering the relative appeal of US debt. “Suddenly Treasuries are attractive” in markets like Japan, said Leaviss.

What comes next for the dollar will depend in large part on whether the Federal Reserve responds to the more aggressive inflation outlook. Last month, policymakers signalled they expected short-term interest rates will be kept at near zero until at least 2024.

But in both the bond and currencies markets, investors are not so sure whether central bankers will let the economy run hot. Money markets are already positioning for a rate rise as soon as next year.

In a sign of the shifting sentiment, Deutsche Bank’s global head of currency strategy, George Saravelos, expects the dollar to decline and the euro to rise to $1.25 by June and $1.30 by the end of 2021. In early January, he said the “risks are skewed to a stronger dollar in coming months”, but by the end of February, he said it was time to sell the US currency again.

“We think the euro will return back above $1.20 over the summer,” he said. “One reason why the market is finding it difficult to call the dollar is that there are two forces pushing in opposite directions.” It now trades a little under $1.19.

In a sign of the shifting sentiment, Deutsche Bank global head of currency strategy George Saravelos* is expecting the dollar to decline and the euro to rise to $1.25 by June and $1.30 by the end of 2021.

In early January, he said the “risks are skewed to a stronger dollar in coming months” but by the end of February, he said it was time to sell the US currency again.

“We think the euro will return back above $1.20 over the summer,” he said. “One reason why the market is finding it difficult to call the dollar is that there are two forces pushing in opposite directions.” It now trades a little under $1.19.

Zach Pandl, co-head of global foreign exchange, interest rates and emerging markets strategy at Goldman Sachs is sticking to the bank’s downbeat dollar view, expecting the euro to trade at $1.28 by the end of the year, 10 cents above its present value.

Megan Greene
What a stronger dollar means for the world 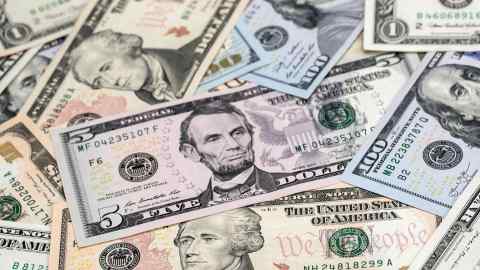 “I do have some concerns about the very near-term outlook . . . [but] we have stuck with the bearish view, because I ultimately think that the dollar is more likely to weaken over the next few months,” he said.

Calvin Tse, a currency analyst at Citi is also sticking to his bearish dollar call, which holds that the currency could fall as much as 20 per cent.

“We do not think that the long-term outlook for the dollar has changed,” he said.

Tse said if the drivers of higher bond yields are the faster-than-expected rate of vaccine rollout, a recovery in global trade and commodity prices and better global growth, then the dollar could still weaken.

But some investors believe that the US economy’s robust recovery coupled with the nearly $1.9tn stimulus package from the government will translate into a stronger dollar as the economy outperforms its peers elsewhere.

In February, Bank of America analysts revised their forecasts for the euro from $1.25 to $1.15 for the end of the year, citing mixed communications from the Federal Reserve, the large fiscal stimulus package and a slow start to European vaccination efforts.

“We expect the dollar to gradually strengthen this year against the backdrop of US outperformance and the eventual Fed policy normalisation,” analysts wrote on March 31.

*This story has been amended to clarify that Deutsche Bank’s formal forecast for the euro remains unchanged.

Get alerts on US when a new story is published