Carbon price is missing from Biden’s overhaul of climate policy

Sign up to myFT Daily Digest to be the first to know about Energy sector news.

After four years in which Donald Trump’s regulatory bonfire cast the US as an environmental pariah, the country is back in the global fold and committed to tackling climate change.

In his first three months in office, Joe Biden has rejoined the Paris climate agreement, scuppered a controversial oil pipeline, suspended fossil fuel leases on public land, proposed unprecedented investment in clean energy, and started to reverse many of his predecessor’s regulatory rollbacks.

But one climate policy tool championed by some US environmentalists — and increasingly by industry groups — is conspicuous by its absence from the Biden overhaul: a carbon price.

“We are no longer seeing climate policy conversations revolve around a carbon price,” says Lindsey Walter, deputy director of the climate and energy programme at Third Way, a centrist Washington think-tank. “As far as the mainstream conversations go — and what it seems that the White House has been pushing for — it’s really not there.” 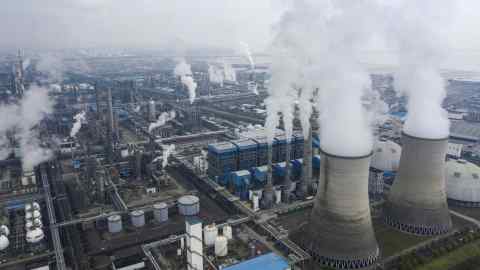 A carbon price puts a cost on greenhouse gas emissions. Rather than mandating emissions targets, it gives polluters an incentive to cut down. It is favoured by economists for its simplicity as a market mechanism.

“You're allowing market actors to respond to incentives and the idea is that they will do that very efficiently,” says Joseph Majkut at the Niskanen Center, another Washington-based think-tank.

Biden campaigned on the most ambitious climate platform in US history and has insisted the country needs to move away from fossil fuels. But he favours the use of blunter standards to force companies to cut emissions. He has been silent on carbon pricing since taking office.

A carbon price can take various forms. Options include a direct tax, whereby companies are charged per tonne of carbon emitted, and a “cap-and-trade” system that sets allowances, which emitters can buy and sell.

About a fifth of world emissions are currently covered by one of these schemes. The EU Emissions Trading Scheme, the world’s biggest, is set to be expanded this year to include the maritime sector. China will launch its own trading scheme this year, too — overtaking Europe’s in size. Canada, a crucial energy partner for the US, has also established a carbon price that is set to rise steeply.

Advocates argue that a US carbon price would provide a degree of permanency to climate policy in the country’s changeable political landscape, where the merry-go-round of Democratic and Republican legislatures means that regulation can be torn up and patched back together every few years.

“Fiscal policy is something that can be more durable, long term and less subject to legal and administrative challenges and risks,” says Majkut. “And we think it can help, under certain conditions, [to] resolve the political challenges of securing ambitious climate action.”

But while California has operated a cap-and-trade system for nearly 10 years, political support for a national system has waned since the failure of the Waxman-Markey bill in 2009. “It is time to try something new,” said Frank Pallone, chair of the House Committee on Energy and Commerce, last month.

Critics argue that the imperfect realities of markets mean that carbon pricing has not worked as well as expected, and that prices imposed are invariably too low to drive the shifts needed to address climate change.

Even so, US business groups increasingly regard a carbon price as the lesser evil when set against direct government emissions mandates.

But industry’s Damascene conversion may have come too late. As part of his recently launched $2tn infrastructure package, Biden revealed a Clean Electricity Standard as his tool of choice to drive down emissions. It would set rising emissions reduction targets for the power sector, forcing generators to decarbonise by 2035.

That policy faces a struggle to reach the statute books — and carbon price advocates hope that, if it hits a wall, their favoured policy will re-emerge.

Despite the president’s silence on the matter, John Kerry, Biden’s climate envoy, has offered carbon pricing advocates a glimmer of hope.

“President Biden believes that at some point in time we need to find a way to have a price on carbon that’s effective,” Kerry revealed on a trip to India last month. “He hasn’t decided or made an announcement about it, but we all know that one of the most effective ways to reduce emissions is putting a price on carbon.”