Shake-up could include pushing Visa, Mastercard and PayPal into the financial sector

Three of the world’s four largest sector-based exchange traded funds face a shake-up due to proposed changes in their composition that would reclassify major companies in information technology indices as financial or industrial.

S&P Dow Jones Indices and MSCI have launched a consultation on a potential revamp of the widely followed Global Industry Classification Standards (GICS) that determine which sector each company is placed in.

This debate could have meaningful consequences, with the weighting of banks in the $45.7bn Financial Select Sector SPDR Fund (XLF), as well as other ETFs such as $11.6bn Vanguard Financials ETF (VFH), falling below one-third, from a peak of 45.4 per cent in 2013 according to S&P data, if the proposed changes come into force.

However, the $49bn Technology Select Sector SPDR Fund (XLK), the world’s largest sector ETF, according to data from TrackInsight, and the $48.2bn Vanguard Information Technology ETF (VGT) would become both more cyclical — prone to rise and fall in line with the economy — and more concentrated as the sector is stripped of several stocks, including three of its eight largest.

“Some of the largest information technology companies in the S&P 500 index could be changing sectors,” said Todd Rosenbluth, head of ETF and mutual fund research at CFRA Research.

“At least seven of its large-cap company sector constituents are potentially moving to a new sector,” Rosenbluth added, with the knock-on effect that “banks would no longer dominate broad financial ETFs”.

MSCI and S&P are proposing that “transaction and payment processing companies” are switched from the information technology sector of the GICS framework to the financial sector.

This would impact companies such as Visa, Mastercard and PayPal, which have a combined market capitalisation of more than $1tn and are, respectively, the fourth, sixth and eighth largest stocks in the IT sector.

The technology category would be further denuded by being stripped of its data processing and outsourced services, and payroll processing sub-industry groupings, which would be switched to the industrial sector under the proposals. This would impact companies such as Fidelity National Information Services, Broadridge Financial and Automatic Data Processing.

The proposed changes would result in heightened concentration in the technology sector, coming as they do on top of a 2018 reshuffle that saw Facebook, Twitter, Snap and Alphabet, the parent of Google, transferred to communication services.

Microsoft and Apple already account for a combined 44.7 per cent of the S&P 500 Information Technology index, even before the latest proposals.

However, Matthew Bartolini, head of SPDR Americas research at State Street Global Advisors, said ETFs such as his XLK technology fund would be unlikely to increase their exposure to Microsoft and Apple much further.

Under the rules of the Technology Select Sector Index, tracked by XLK, an individual company’s weight is capped at 23 per cent, while the sum of stocks with weights greater than 4.8 per cent cannot exceed 50 per cent of the index.

These rules mean the weighting of the two giants, as well as Nvidia Corporation, the third-largest stock in the sector, effectively cannot rise any further, meaning that the weighting of the next ranked companies, such as Adobe, Salesforce and Cisco Systems, will need to be bumped up artificially to take the slack.

Bartolini suggested this was unlikely to significantly affect XLK’s performance, however.

“What we see currently in funds is some difference relative to the S&P 500 [IT index] itself because of the capping. We have to overweight some smaller names, but historically these weighting differences haven’t had a significant impact on the fund because we are still diversified within the sector itself. The movement of the sector will drive the sector’s return,” Bartolini said.

The proposed changes would be likely to increase the level of risk in technology funds such as XLK. Visa, Mastercard and PayPal have five-year betas of between 1.1 and 0.92, according to S&P Capital IQ, meaning they broadly tend to rise and fall in line with the wider market. Most other tech stocks have higher betas than this, meaning they tend to be more volatile.

The switch, assuming it happens, may also have a downward impact on the valuation of the likes of Mastercard. While there is no logical reason for a company to be rated more lowly simply because it has changed sector — it is still the same business — a company that has been transferred will now be measured against a different peer group.

“There is likely to be some market impact because these companies are being judged against a different peer group,” said Rosenbluth.

Based on current valuations, Visa, Mastercard and PayPal would be among the five largest constituents of the financial sector, alongside JPMorgan and Bank of America.

They would be likely to damp volatility in the sector, given that the larger banks typically have betas of about 1.5.

“It’s rare to think of tech as low risk but does this reduce the risk profile of the financial sector? I think it does,” said Rosenbluth. The trio of newcomers were likely to have stronger growth prospects than banks and insurers, he added, but be more expensive, while rendering the financial sector less interest rate sensitive.

As a consequence, the weight of the banking industry within the financial sector would fall from 39 per cent to 31 per cent, on current valuations.

MSCI and S&P are currently consulting on the proposals, with a decision due in February. 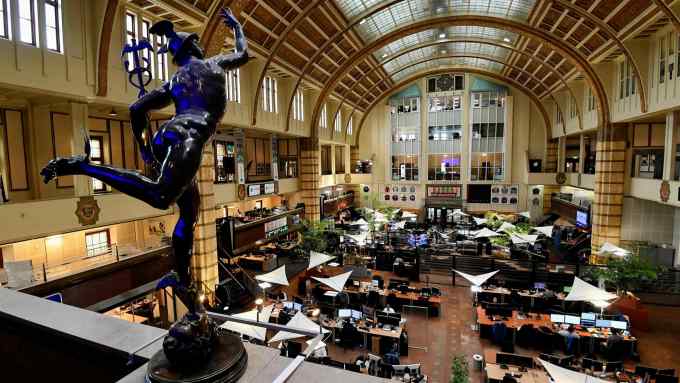