Corporate lobbying is often criticised for allowing powerful companies undue influence over the democratic process. But if it works, small investors will now at least be able to grab their share of the spoils.

New York-based Strategas Asset Management has unveiled an exchange traded fund designed to tap into companies’ efforts to increase their profitability by lobbying the US federal government.

Dan Clifton, head of policy research and lead portfolio manager for the Strategas Global Policy Opportunities ETF (SAGP), said the launch aimed to capitalise on the US experiencing “the most politically volatile period since the end of the Civil War, with the party in power having changed in seven of the last eight election cycles.

“One year it is tax cuts or healthcare reform, then it gets taken away. Companies are now saying they have a greater risk to their business from Washington than from other risks,” Clifton added.

“They understand that they need to be at the table as part of the process in Washington. We believe these companies have an earnings advantage over other companies.”

The ETF will build on Strategas’ existing policy opportunities portfolio, which is only available to institutional investors via separate accounts.

However, while that strategy is focused purely on large and mid-cap US stocks, SAGP also encompasses small caps and non-US companies.

Clifton argued that smaller companies may get more bang from their lobbying buck than large ones, which might have to spend on lobbying every year as a form of “maintenance”, around issues such as workers’ rights and healthcare.

“Small companies see this as a R&D expense. They say ‘we are going to get a return on this’. Small and mid-cap have had a tremendous performance in backtesting. It’s the first time we are incorporating that style,” Clifton said.

Annual lobbying spending in the US has averaged $3.5bn in recent years, according to Statista, with the pharmaceuticals, electronics and insurance sectors having the largest outlay.

However, rather than total spending, SAGP weights companies based on their “lobbying intensity”, taking into account their size.

“If [the weightings] were just calculated on the basis of lobbying spend we would have Amazon, Google and AT&T. None of these companies are in the basket. We need to find companies where the earnings benefits [from successful lobbying] would be the greatest,” Clifton said.

The initial portfolio is heavy with drug and biotech companies, such as Japan’s Astellas Pharma, Germany’s Fresenius Medical Care and Biogen of the US. But it also includes drinks companies Brown-Forman and Diageo; tobacco giants Altria Group and Philip Morris International; and purveyors of fast-food such as Domino’s Pizza and Yum Brands.

Clifton cited the successful efforts of biotech companies to help water down proposals to lower prescription drug prices as an example of SAGP’s investment thesis.

The pre-existing policy opportunities portfolio has had a disappointing performance in recent years, undershooting the S&P 500 every year since 2018.

Clifton attributed this partly to its sectoral tilts, namely its low exposure to technology stocks and overweighting of pharma and defence, which have not been helpful in recent years.

He also cited the geopolitical hurdles that frustrated lobbyists’ efforts to limit the impact of then-president Donald Trump’s trade tariffs in 2018.

The ETF’s thesis may raise eyebrows, however. “If corporate lobbying spend can be tracked to excess profits, I think that does raise some questions for that particular company or industry,” said Kenneth Lamont, senior fund analyst for passive strategies at Morningstar.

Nevertheless, Lamont said it was “not the only ETF that has strayed into a moral or an ethical grey area”, citing the BAD ETF, which invests in gambling, alcohol and drugs, as another example.

Todd Rosenbluth, head of ETF and mutual fund research at CFRA Research, said despite the belief held by some that “government policy should be done on behalf of the people without corporate interest”, he did not think most investors or Americans at large viewed the practice as unethical.

Rosenbluth drew allusions to the Democratic Large-Cap Core Fund (DEMZ) and the Point Bridge GOP Stock Tracker ETF (MAGA), which invest in companies supportive of Democrat and Republican candidates respectively, but added that SAGP was at least “playing on both sides of the aisle, so you don’t have to be politically affiliated to one or the other to invest in it”. Moreover, it offered a portfolio “you are not going to find elsewhere”.

Still, Nathan Geraci, president of the ETF Store, a Kansas-based financial adviser, said SAGP’s challenge “will be overcoming any perception of partisanship or political tie-ins.

“Corporate lobbying inevitably becomes intertwined with politics and thus can become emotionally charged at times. Most advisers prefer not mixing politics with portfolios for just that reason.”

Geraci also noted that the EventShares US Legislative Opportunities ETF (PLCY), which focused on stocks its managers believed would gain from changes in government policy and regulation, closed down in August 2020 with assets of just $23mn.

“Ultimately, the success of this ETF will hinge on performance and marketing itself as entirely politically neutral,” he added.

Clifton said he could “understand that people would say this is bad, it feels dirty”, but defended both corporate lobbying and his fund.

“The beauty of the American system is that everybody is involved. NGOs, labour unions . . . I would argue there might be more power on that side than on the corporate side,” he said.

“We believe in lobbying. It helps avoid mistakes. If you are not at the table, you are going to be on the menu.”

As for SAGP, “we don’t make the rules,” Clifton said, “we just figured out there was alpha there.” 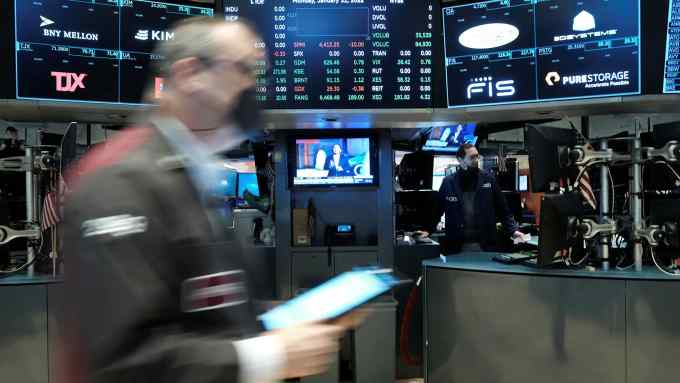