We’ll send you a myFT Daily Digest email rounding up the latest Lebanon news every morning.

Lebanon and the IMF have reached a preliminary agreement for a $3bn loan facility, the first significant step towards bringing relief from an economic and financial crisis that has crippled the country since 2019.

Two years after the onset of the crisis, the country’s currency has lost more than 90 per cent of its value and nearly three-quarters of its people live below the poverty line, according to the UN.

The long hoped-for bailout, announced on Thursday, is vital to stem the further collapse of the economy, but talks between the IMF and Lebanese authorities had repeatedly stalled over economic reforms required by donors.

“The [Extended Fund Arrangement] aims to support the authorities’ reform strategy to restore growth and financial sustainability, strengthen governance and transparency, and increase social and reconstruction spending,” the IMF said in a statement on Thursday.

Unveiling the deal following a meeting with IMF delegates in Beirut, Najib Mikati, Lebanon’s prime minister, said his government had promised the fund that it would implement wide-ranging reforms.

The crisis demanded “a comprehensive reform program” in order to achieve “financial and economic stability and . . . permanent and strong growth”, he said.

In its statement the IMF said: “This crisis is a manifestation of deep and persistent vulnerabilities generated by many years of unsustainable macroeconomic policies fuelling large twin deficits (fiscal and external), support for an overvalued exchange rate and an oversized financial sector, combined with severe accountability and transparency problems and lack of structural reforms.”

The fund arrangement would extend over 46 months and give Lebanon access to the equivalent of $3bn in special drawing rights. Full approval by the IMF board is contingent on Lebanon implementing a series of measures.

Lebanon
Disillusioned Lebanese lose faith with politicians ahead of poll 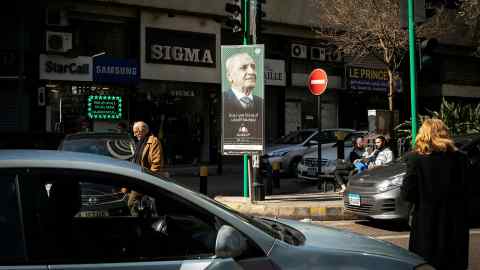 These include a restructuring strategy for the banking sector that limits the impact on small depositors and “recourse to public resources”; parliamentary approval of a bank restructuring law; and external evaluation of the 14 largest banks by a “reputable international firm”.

The agreement also requires reform of a decades-old banking secrecy law “to bring it in line with international standards to fight corruption”; completion of an audit of the central bank; parliamentary approval of the 2022 budget; and unification of the multiple official and black market exchange rates for the Lebanese pound that have existed since the crisis started.

The announcement is the first indication that Lebanon’s government is taking seriously the need to tackle the crisis, observers say. It also comes weeks before the country is due to hold a general election.

But given the Lebanese political establishment’s previous reluctance to implement reforms, the road to full approval by the IMF looked arduous, analysts warned.

Get alerts on Lebanon when a new story is published