The first exchange traded fund to take an inverse exposure to another ETF rose by 5.5 per cent on its first two days of trading, mirroring the day’s fall in Cathie Wood’s flagship $21bn Ark Innovation ETF (ARKK).

Tuttle Capital Management’s Short Innovation ETF (SARK) listed on Nasdaq on Tuesday with the aim of providing the inverse returns, on a single day’s basis, of ARKK.

Its trading volume of $843,000 on day one comes as short interest in ARKK has shot up to a new record of 17.3 per cent of its shares, with a market value of $3.7bn, currently being borrowed by investors betting on a sell-off, according to S3 Partners, a specialist data provider. This is up from just 2 per cent at the turn of the year and 15.3 per cent a month ago.

The Ark fund has enjoyed a phenomenal run as the highest-profile vehicle riding the continued rise of the US’s mighty technology sector. Its shares have surged 246 per cent since the lows of March 2020, with its assets jumping from just $2bn over the same period.

However, amid increasingly stretched valuations for its key holdings such as Tesla, Coinbase, Zoom and Zillow, more market participants have been prepared to bet it is heading for a fall.

With ARKK’s share price off 3.2 per cent this year, short sellers had made $81m in year-to-date mark-to-market profits, $30m of this in November, said Ihor Dusaniwsky, head of predictive analytics at S3 Partners.

“There are over 30m shares shorted right now, so going into this we knew there was a demand,” said Matthew Tuttle, chief executive and chief investment officer of Tuttle Capital Management. “That doesn’t include all the puts or structured products with investment banks, so we know the interest is there.

“Many investors with whom we speak, including financial advisers, are cautious on current valuations for unprofitable innovative companies.”

SARK uses swap contracts, rather than shorting, to gain inverse exposure to ARKK.

Tuttle claimed SARK had advantages over shorting for some investors. “Some people just don’t like to short. It’s a little bit more of a pain in the butt than just buying an inverse ETF,” he said. “[With a short ETF] you don’t have to deal with short squeezes, you don’t necessarily have the risk of losing 100 per cent and you don’t have margin calls, and then there are people who for whatever reason can’t short.”

SARK charges a 75 basis point fee, the same as ARKK. In addition, Tuttle said the swaps were likely to cost a similar sum to ARKK’s stock borrowing fee, which is currently 5.1 per cent, according to Dusaniwsky, compared with 0.7 per cent for the average stock. Short sellers clearly also pay this fee.

Despite launching SARK, Tuttle said he had admiration for Wood’s bold investment style.

“I have great respect for what she has done for active ETFs — before Cathie Wood, ETFs were known as index funds,” he said. “I think she has got tremendous guts to hang on to these things like Tesla and bitcoin when they were not popular and to have big positions.”

Other commentators were broadly positive about the launch.

“Tuttle Capital’s SARK ETF is an interesting security,” said Dusaniwsky. “If SARK’s management and expense fees are below 5 per cent, it may be the cheaper option to get ARKK short exposure.”

Todd Rosenbluth, head of ETF and mutual fund research at CFRA Research, said “Ark Innovation ETF was a surprise darling of the US ETF market in 2020 with its meteoric total return leading to billions of dollars of new assets. While the fund has significantly underperformed in 2021 [in comparison to indices such as Russell 1000 Growth] many investors have stayed loyal and ARKK remains a focal point for both bullish and bearish investors.

Oktay Kavrak, product strategist at Leverage Shares, a European provider of exchange traded products, said: “Cathie Wood, like Elon Musk, is one of the most influential yet polarising public figures around. With short interest in ARKK hitting all-time highs I think it’s great investors are being empowered to short or hedge their positions in ARKK.

“Sadly, once again, it looks like European investors aren’t invited to the party, since the product will only be available in the US. We actually think investors would be open to more aggressive iterations in both directions, whether long or short, and would like to see a similar opportunity for investors to express their convictions on this side of the pond.” 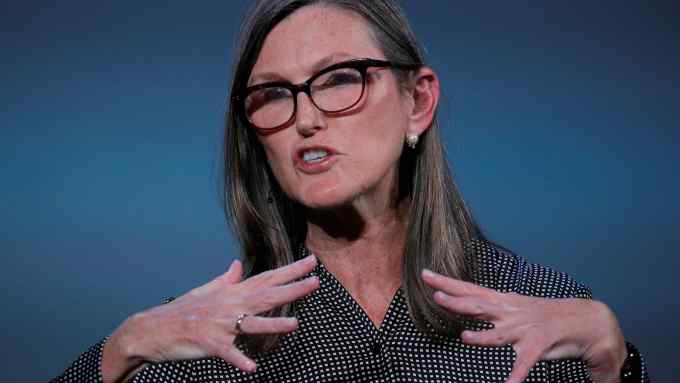