Hans Niemann in action again this week at St Louis

In this week’s puzzle: White lost. How could he have won?

We’ll send you a myFT Daily Digest email rounding up the latest Chess news every morning.

Hans Niemann, the 19-year-old who has launched a $100mn conspiracy and defamation lawsuit against chess world champion Magnus Carlsen and others, is in action again this week. Niemann competes in the Fall Chess Classic in St Louis, starting November 2, against nine other strong grandmasters.

Niemann’s first game on Wednesday night is against Sam Sevian, with whom he previously had a strange dispute at last month’s US Championship. While Niemann was thinking about his next turn, Sevian picked up Niemann’s king from the board, claiming that the cross on its top had fallen off. There was an argument before the arbiter intervened and the game continued, surprisingly with no penalty for Sevian, who had clearly broken the rule stating that it is an offence to disturb your opponent.

One week further on from the Fall Classic, Niemann will lead the six-man US squad in the 12-nation 2022 World Team Championship in Jerusalem. His national ranking is only No 8, but all the top grandmasters will be missing from the event, which is reckoned of inferior status to last month’s 180-nation Olympiad in Chennai, India, and which clashes with Thanksgiving.

It is still surprising that the US did not take the opportunity to field a rising stars team with Niemann, Sevian, Awonder Liang and Jeffery Xiong, who are all around age 20 and who could have made a similar impact to India’s teenagers at the Olympiad.

The cheating allegations against Niemann have brought chess questionable publicity

Niemann is currently a very active competitor, playing three strong tournaments in quick succession. His $100mn lawsuit, however, claims that the alleged defamation and conspiracy against him “destroyed Niemann’s remarkable career in its prime and ruined his life” by in effect “blacklisting” him.

Overall, the cheating allegations against Niemann have brought chess questionable publicity. Worse, the matter looks set to drag on for many months, with no resolution at least until the court case is dismissed or sent for trial. The chess community is sharply divided.

Fide, chess’s world body, will soon issue a report that is expected to be critical of how Carlsen withdrew from the prestigious Sinquefield Cup after his loss to Niemann in the third of nine rounds. Fide’s position on cheating is that a very high level of proof is needed, as anything less could result in a successful appeal to the Court of Arbitration for Sport.

On the other side, many active grandmasters support Carlsen’s stance, even though no hard evidence has emerged to support the world champion’s belief that there was cheating in the Sinquefield Cup game. Of the remaining nine world top 10 grandmasters, three have come out with pro-Carlsen statements, four have made no comment, and two have been equivocal.

What happens next will be influenced by Niemann’s results in the Fall Classic and the World Teams. If he can continue — or even improve on — his positive performance in the US Championship amid what are sure to be tight security measures, he will gain significant credibility.

Aside from the “Toiletgate” world championship match in 2006, when it is generally agreed that both Veselin Topalov and Vlad Kramnik had unfounded suspicions, Niemann is by far the strongest player ever to have his play questioned.

At the 2010 Olympiad, France’s Sébastien Feller won an individual gold medal by a sophisticated scam where he received coded messages from his team captain, who in turn was linked to an accomplice in Paris using a computer. One of Feller’s wins was against England’s David Howell, and I recall playing over that game at the time and being impressed by the Frenchman’s complicated tactics.

After 2010, and even more after the Sinquefield Cup, security at major chess tournaments has been stepped up. On-site spectators are barred except for officials and accredited media. Players are frisked at the start of the game with metal detectors and scanners. Transmission of the moves to chess websites is delayed by 15 or even 30 minutes. Despite claims that cheaters can evade such strong measures, there is no evidence that anyone may have done so. 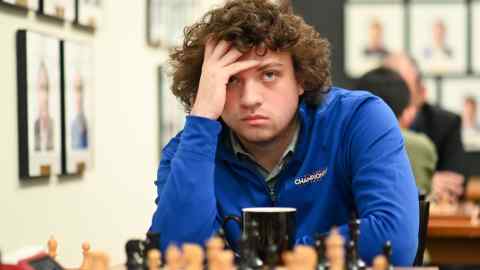 The practical problem is that extra anti-cheating measures put financial and organisational strains on even the best-run tournaments, while they can make smaller events with limited budgets no longer viable. However, serious cases of suspected cheating are very rare. If a player takes his mobile phone to the loo, he will be quickly spotted.

Karl Murazia vs Michael Feygin, Germany 2014. White to move and win. Play went 1 Qg1? Qg4+! 2 Ke3 Qf3+ when Black won the a3 rook and later the game. Can you find the hidden resource which White missed?