In May 2014, Amel Najjar was in Jordan on a medical mission with Children of War Foundation, a non-profit organisation she founded. As part of its work, COWF deploys teams of doctors from the US to treat children affected by war, poverty and other disasters.

But they cannot help every patient and, on this occasion, Najjar was called on to deliver devastating news. “The doctor asked me to tell a mother that her child was not going to have surgery. And we knew the child was going to die,” she recalls.

The mother begged for help, kissing Najjar’s feet and offering her wedding ring from her deceased husband — the only item of value she had. Najjar froze. “I choked up and I could not look at her, so I ran. I grabbed a taxi, went back to the hotel where my son was and squeezed him like that was my last hug.” It was then that she decided to go to business school so she could help the foundation to grow.

As a youngster, the mother-of-two lived between Jordan and the US before her family moved to Texas permanently when she was 15. The transition was hard, she says, having been exposed to what was happening in the Middle East with the Gulf war, refugees and economic hardship.

Now settled in West Hollywood, she established COWF in 2010 when she was asked to help secure medical care in the US for Hashim, a nine-year-old boy who had been injured by a roadside bomb in the suburbs of Baghdad. Among his injuries, Hashim had lost part of his skull, and suffered shrapnel damage to the brain and second-degree burns.

“So I went to Jordan and brought Hashim there,” says Najjar. “Then I camped out in front of the US embassy for three days, demanding they give him a medical visa.” When that was secured, Hashim was flown to the US and admitted to Children’s Hospital Los Angeles.

Initially COWF helped one child at a time by bringing them to the US, but this was expensive and hard to scale. In 2013, as the crisis in Syria reached its bloodiest point to date, the foundation was asked by a hospital in Jordan to bring a medical team from the US to help with complex cases.

The approach was just what the organisation needed, allowing it to support more children and build capacity.

“We had the local surgeon scrub in on cases so they could learn from the international doctors and continue to engage with them once they left. This gave them the opportunity for additional medical education and information exchange — and that worked brilliantly,” says Najjar.

From there, COWF mostly provided medical missions and brought children to the US only when facilities or expertise were unavailable closer to home. Missions have flown all over the world, including to Haiti, Panama and Nicaragua, and the foundation has built a network of contacts in countries such as South Africa, Cambodia and the Philippines, so they can refer children they cannot support directly. Medical education has also become a key part of the organisation’s work.

Despite the progress, Najjar’s encounter in 2014 spurred her to go to business school. “I felt I needed to incorporate aspects of the business world in what I was doing because I was stuck all the time,” she says. “I needed to know more about the numbers side of things, entrepreneurial finance and what is happening in the business world.”

In 2016, Najjar started the executive MBA in the UK at Oxford university’s Saïd Business School. She chose the EMBA for several reasons: she says it allowed her to study a more traditional MBA curriculum but with all the benefits of an executive programme; the international modules, including study in India, China and South Africa, appealed; and the social entrepreneurial options were a good fit.

Executive MBA
Learning to lead in a crisis 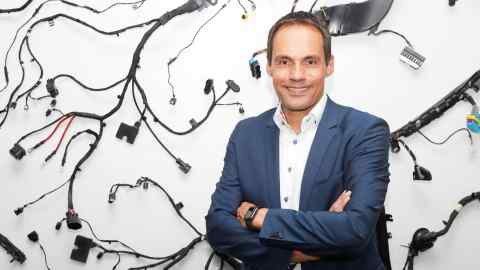 Despite this, at first Najjar felt intimidated. “You would think, ‘A female, Jordanian-American, mum-of-two, non-profit [leader] from Los Angeles — what is she doing on an Oxford EMBA?’” she says. People did ask many questions, but her peers learnt from her, and she from them.

The demands on her were great. Najjar would fly in from the US once a month for a week of intensive classes before heading home to complete coursework. “The travelling was hard,” she admits. “I managed my household from my phone. It was interesting. There was a time when I watched my son’s piano teacher’s car burn in our driveway [as the fire department tackled the blaze] while I was in the middle of a business finance review.”

But “that challenging experience just made me so much stronger”, says Najjar, and the programme has proved valuable for her career. She sits on the board of the UN Women for Peace Association and the International Rescue Committee’s Airbel Impact Lab (which devises innovative solutions to humanitarian problems) among other roles. The EMBA gave her the confidence, credibility and experience that helps with such positions.

Najjar is also implementing her EMBA knowledge in COWF’s work. The foundation is starting to support fledgling entrepreneurs who have business ideas that will contribute to their communities. “We are providing the microfinancing opportunity, then using fintech because a lot of people [do not have bank accounts],” she says.

“If you had asked me before starting the programme, ‘Would you be interested in fintech?’ I would probably have said no. But now it is ingrained into what we are trying to do,” she adds. 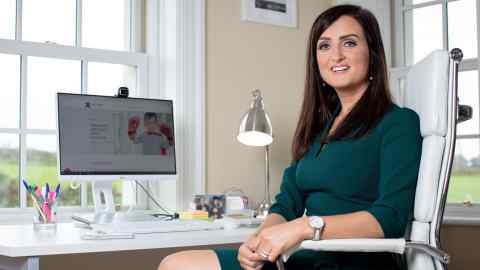 This is not just about supporting disadvantaged communities — it could also be a revenue source for COWF. “Hopefully we will be able to bring in sustainable funding through microfinancing, allowing these people to give back to the organisation once they become productive, generative participants in their community,” she says.

The revenue generation will also be essential for the future of COWF. The team in Jordan is now working for payment and Najjar has always volunteered for the foundation, enabled by her personal investments and work as a partner in a social investments and real estate acquisition company (she can be seen in the Netflix reality show Selling Sunset). Right now, she is focused on growth.

“Oxford has in its mission to tackle ‘world-scale problems’,” she says. “I think about that all the time and that is what I want to do.”