Russia-focused funds with more than €4bn in assets freeze redemptions

Russia-exposed funds with more than €4bn in combined assets have been frozen in Europe, preventing investors from heading for the exits as they grapple with unprecedented western sanctions imposed on Moscow after its invasion of Ukraine.

At least 22 asset managers including JPMorgan, BlackRock, BNP Paribas, Franklin Templeton, Amundi, UBS, Schroders, Liontrust, Danske Bank, East Capital and Pictet have suspended funds since the invasion, meaning investors are now stuck with no indication of when they might be able to withdraw their money from these vehicles, according to data from Fitch and announcements from the managers.

More suspensions are expected, with assets held in Russia-focused mutual funds sold in Europe standing at €5.7bn at the end of January, according to Lipper, the data provider.

“We are monitoring [other] funds closely for signs of unexpected spillover effects,” he added.

The fund suspensions highlight how western allies’ measures to cut off Russia from global financial markets have had a knock-on effect for international fund managers, who hold at least $150bn in Russian assets collectively. Investors’ ability to trade Russian assets both on foreign and domestic markets has sharply deteriorated in recent days, something that has complicated the situation for fund managers as they plot their next steps.

Russian stocks were already down about 40 per cent for the year to date by Friday’s close in US dollar terms. The Moscow stock market was closed on Monday and Tuesday this week, but trading in Russian equities listed abroad suggests the market is set for heavy losses when it reopens. Russian bonds denominated in foreign currencies have also come under heavy selling pressure.

The asset management arm of Danish institution Danske Bank said on Monday: “Danske Invest has been forced to suspend trading in the equity funds that have a significant weight of Russian equities in the portfolio.” Pictet said it would reopen its Russia equity fund “as soon as the market conditions allow”.

Meanwhile, London-based asset manager Liontrust said it was unable to predict when it might reopen its £181.7mn Russia fund. “We will keep the suspension of the Russia Fund under continual review given it is such a rapidly changing situation and we will update investors as soon as we can,” the company said.

BlackRock, which has suspended redemptions from two investment funds and suspended creations in an exchange traded fund, said in a statement that it was “actively consulting with regulators, index providers and other market participants to help ensure our clients can exit their positions in Russian securities, whenever and wherever regulatory and market conditions allow”.

Schroders suspended its emerging Europe fund in a sign that the impact is spreading beyond just Russia focused funds. “We are closely monitoring the situation so that we can continue to act in the best interests of the fund and its shareholders,” Schroders said on Tuesday. 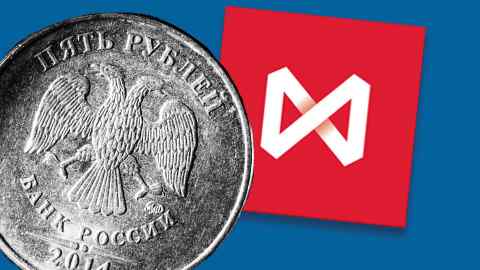 Broader emerging market funds with combined assets of €640bn had an average exposure of 4 per cent to Russia, based on Lipper data. Many EM fund managers were holding “overweight” positions in January because Russian shares were trading on extremely low valuations even before the Ukraine invasion.

At the same time, pension funds around the world are looking to offload, or are reviewing, their Russia investments. Retirement plans representing tens of millions of members in the public and private sectors typically have some exposure to Russia through EM funds, sovereign debt or through stakes in funds and listed companies.

The Universities Superannuation Scheme, the largest private-sector pension plan in the UK, plans to divest assets worth £450mn exposed to Russia — representing about 0.5 per cent of its £90bn portfolio. Its holdings included an £81mn stake in Sberbank, Russia’s largest bank, and £84mn in Lukoil, the energy giant, at the end of September last year.

“In terms of our own position, there is clearly a financial as well as a moral case for divestment with respect to our Russian holdings,” the USS said in a statement.

Caisse de dépôt et placement du Québec, one of Canada’s largest pension managers, said “disposal plans” were under way for its Russian holdings, which the C$420bn ($330bn) fund described as “marginal” in terms of value.

Australia’s sovereign wealth fund pledged on Monday to divest its remaining holdings of companies listed on the Russian stock exchange, which amounted to about 0.1 per cent, or A$200mn ($110mn), of the total portfolio.

Meanwhile, Calpers, the US’s biggest public pension plan with about $480bn of assets, has $900mn exposure to Russia. It said it did not hold any Russian debt, but would not comment further. The California State Teachers’ Retirement System, which held Russian investments worth less than $500mn as of February 23, said it was reviewing its positions.