Norman Foster: ‘One’s always chasing the end of the rainbow’

The British architect on his plans for building the cleaner, greener cities of the future

Lord Foster has conceived some of the world’s most iconic buildings – The Gherkin in London, Berlin’s The Reichstag, Cupertino’s Apple Park and the headquarters of The Hongkong and Shanghai Banking Corporation. But asked what future he’d create with unlimited resources, his ideal is not a Blade Runner-like skyline of kinetic skyscrapers and flying cars, but something simpler and more sustainable, which builds on the idea of community. “I’d build a neighbourhood that functions autonomously,” he says from his home in the States. Now 86, tanned and decked out casually all in white, he looks as sharp as his razor-sharp mind.

“One’s always chasing the end of the rainbow. Design is that endless quest for perfection, so it would be a place where you would have a synergy between living and waste, which would not go to landfill but would be processed to generate energy, or to create another product like fertiliser,” he continues with the steady, measured tone of a well-versed orator. “It would generate power in a clean way instead of linking it to past ideas of the big power station and transmission lines. Much like the field of communications where the ageing infrastructure of telephone poles, cables and exchanges have been designed out, this neighbourhood would not only be doing its job more elegantly, it would be doing more with less.”

Foster’s ideas on sustainability, long synonymous with his work, come as no surprise. Nor does his belief that cities are the future, despite the paradigm shifts caused by the pandemic. It’s a subject he’s been vocal about in recent interviews, pointing to their constant evolution and drawing parallels with other traumatic events in history that have magnified and hastened change. “When we think of the DNA of London, the Georgian terraces and the brick construction, we don’t think fireproof. We don’t say the Great Fire of London or the introduction of Building Code party walls. We think of a noble architecture of public squares and spaces and of a dense walkable, sustainable city.”

Wisely, Foster steers clear of predictions, instead proposing one possible future where a change in mobility (the death of the gas-guzzling car) and the usage of buildings might improve life: the obsolete urban car park becoming an urban farm enabling city dwellers to use less water, fertiliser and to reduce their carbon footprint; and redundant offices repurposed to offer homes to key workers pushed out to the suburban fringes of the metropolis.

It’s an ethos that at first seems at odds with his practice’s latest London project, the £1bn overhaul of Whiteleys department store – a slice of London history conceived in 1911 as one of the city’s first luxury department stores, now being transformed into its first Six Senses hotel and spa, complemented by shops and swish apartments. But it all makes sense when you hear Foster refer to The Whiteley as a “recycled building”. “It becomes the ultimate in sustainability because it’s an element of the past that can be regenerated – and that is an investment in the future,” he says.

Foster’s love of cities and of its infrastructure, what he calls “urban glue”, was shaped as a boy raised in a terrace in Manchester at a time when Lowry’s matchstick men still rang true, amid the smoking chimneys and red-brick factories of the great northern cities. He smiles as he recalls leaving school at 16 to work at Manchester Town Hall, where he remained for two years before being called to military service in the RAF. “I had always had a passion for buildings, and found myself immersed in this extraordinary, High Victorian gothic architecture of the town hall, which was amazing. I was walking around, visiting buildings, sketching,” he says of his time in the city, to which he returned after the military. “That’s when it all came together: the love of architecture, the love of machines, of sketching and modelling – the dots connected at the right time and I was then able to go to university. I was extremely fortunate.”

Design is that endless quest for perfection

Foster refers to incidents of luck throughout his career. But it’s clear that he also stood out from the start. He was unable to qualify through conventional channels for a degree course at Manchester University, so it created a diploma course for him. He worked constantly during that time, creating sketches for local architectural practices in between manual work to earn his way. “Architecture was like a religion. It was something that I would literally pay to do,” he says, adding that he supplemented his income with pay-outs from competitions. “I won £1,000 for my drawings at one RIBA competition, a sum that was worth the equivalent of at least £10,000 today. So I would then go off and I would discover Palladio or Jorn Utzon in Denmark, all before he won The Sydney Opera House competition in ’57,” he says. “I was fired by a passion for architecture, and seamlessly after graduating from Manchester went to work in London for the summer for the same practice that had helped me during my student days.”

Foster saved enough to fly to America (“a £100 one-way air ticket,” he says of what was most certainly a princely sum for a young grad) and through the Henry Fellowship was offered a place at Yale. “I went to Yale because of the people there: the new Dean was Paul Rudolph, who had pioneered an extraordinary new architecture in Florida. He was the all-American action hero who had used new technologies, but had also been trained by Gropius who was ex-Bauhaus. So in some ways, I had to go to America to get a European Bauhaus education,” he laughs.

There were other mentors too. “Serge Chermayeff, although born in Chechnya, was the very essence of Europe and spoke like a philosopher. Then you had Vince Scully who brought history alive. He could take a film like The Magnificent Seven which was showing at the local cinema and compare it with the Japanese film The Seven Samurai, then somehow link that culturally to James Joyce, the endless horizon, and how Frank Lloyd Wright would site a building. He’d connect that to the Greeks and the Parthenon, and back to Saarinen and what he was doing down the road in his architecture office – he would stitch it all together.”

Many of these memories resurfaced for the architect as he addressed students at a recent talk at Yale, where he showed them drawings he had created in Paul Rudolph’s office of the very space they were sitting in. He comes alive when talking about how people experience his buildings, recalling a policeman at Stansted Airport, who was part of the security team when the building was opened by the Queen in 1991, making a point of telling Foster that the vast open space articulated by a floating roof structure was “the most beautiful he’d seen”. And the gaffer on the building site of the high-tech Renault Centre in Swindon (opened in 1982 and given Grade II listing by English Heritage in 2013), who was a “tough nut in charge of a site full of tough nuts”. “He told me that at the end of the day, he was so physically and mentally exhausted he would go up on the roof and watch the sunset almost as a zen-like experience. These were not people who read about architecture but they were experiencing it, too.”

In part, it’s this emotive experience that is at the heart of the spiralling glass dome that Foster and his practice placed atop The Reichstag in Berlin – a structure completed in 1999 symbolising the reunification of Germany, but one Foster sees as one of his recycled buildings. “It’s the most visited parliament in the world by a huge margin, you have thousands queuing to walk the ramps of the spiral. I think it strikes a chord because we symbolically placed the public above the politicians who are answerable to them,” he says.

The project also provided Foster with an opportunity to push his green ideals. “As architects we were giving them choices, we were saying this is an opportunity for you to set an example to the nation that you can address climate change and reduce CO2 emissions,” he says. Such concepts, Foster reveals, influenced his work long before they were given modern labels. “In the 1960s we were talking about saving energy and recycling sparked by Rachel Carson and her book Silent Spring and Buckie’s [Buckminster Fuller’s] Operating Manual for Spaceship Earth. All of these were the birth of the green movement before they were talking about green architecture.”

“Architecture was like a religion. It was something I would literally pay to do”

Some of the early patrons who travelled on this journey with Foster joined him for a lunch celebrating his 80th birthday. “I sat next to Fred Olsen, who remarked how far ahead of our time we were, and my only regret is that we did not do more together,” Foster says of the project at Millwall Docks. The dock commission was the first for Foster and his then wife, the late Wendy Cheesman, with whom he set up Foster Associates from a bedsit in 1967. “But they are important projects because they were anticipatory – we were doing healthy, breathing buildings way back in the ’70s, which are still there, like The Sainsbury Centre for Visual Arts [completed in Norwich in 1978]. The big difference between then and now perhaps is that now scientific studies demonstrate those buildings are healthier, that we are more alert, that we are more alive.”

Foster draws an invisible line connecting these early buildings to recent projects: California’s Apple Park campus, designed in 2018 as an unbroken circle powered by 100 per cent renewable energy; and Bloomberg London opened in 2017 – a Stirling Prize-winner complete with a facade of breathing “gills’’ and eco features, which uses 70 per cent less water and 40 per cent less energy than conventional office buildings.

For Foster, a building “has to give back to the city”, whether that’s by including restaurants and shops beneath apartments where people can socialise, or designing tree-lined promenades that clean the air we breathe. He wants to give back personally too. “I get as much of a buzz from working on a small charitable project for the kids in Harlem as I do with JP Morgan’s mega project on Park Avenue,” he says. Through his Foundation, Foster is also masterminding an exhibition set for Bilbao: “There’s one gallery where I brought together 16 schools of art and architecture from around the world. I’m very involved with younger generations of architects.” It all takes him back to his own time at Yale and those historic characters that helped shape his career. “I’m indebted to those mentors, to people like Buckminster Fuller, who I was privileged to work with in the last 12 years of his life. I’ve been very fortunate,” he concludes. Will one of his students say the same 50 years from now? Only the future can tell... 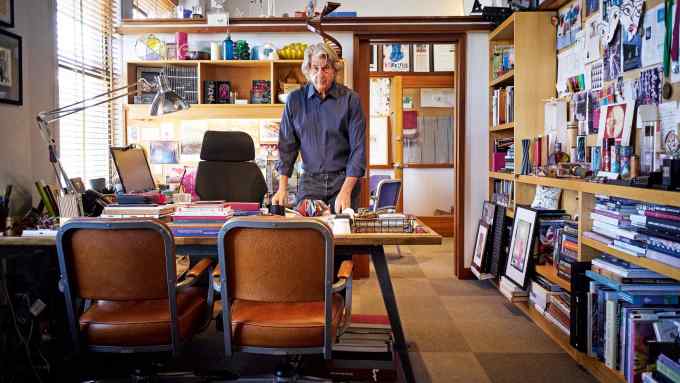