If you think the same, join us
Special Report Sustainable Food and Agriculture
See all 68 stories
Sustainability

Call it a virtuous circle. As the number of companies pursuing sustainability has grown, so has the market for sustainability finance — which, in turn, is encouraging more companies to go green. Agribusinesses, under pressure in areas ranging from greenhouse gas emissions to biodiversity, are increasingly keen to join in.

Under the terms of these lending arrangements, companies must pay investors higher interest rates if they fail to hit agreed sustainability targets. But the companies like SLL deals for the flexibility they grant over use of the proceeds — a key reason, says BofA, that they account for about $700bn of the overall $1.3tn market for loans tied to environmental, social and governance (ESG) factors.

And although “greenwashing” — whereby companies promise more on the environment than they deliver — remains a perennial concern, lenders are cracking down. In May, the Loan Syndications and Trading Association (LSTA), a US trade organisation, toughened its requirements for SLLs, so that borrowers must obtain independent, external verification of their environmental performance against targets.

As more corporate sectors seek to cash in on the appetite for ESG investment, standards setters are responding with specialised guidance. In June, the UK-based Climate Bonds Initiative updated its standards for agribusinesses looking to issue green debt. For the first time, it added criteria pertaining to livestock, including animal welfare and the provenance of feeds — where there has been criticism of the environmental impacts.

According to Lini Wollenberg, a University of Vermont research professor who was lead technical agriculture consultant for CBI, many impact investors have been reluctant to finance livestock deals because of the environmental risks. In response, “CBI was very clear that they wanted to set standards high” for corporate borrowers, she explains.

“The CBI criteria should provide sufficient assurance to investors that at least climate risks are minimised,” she adds. “Green debt provides an opportunity for finance to create incentives to guide the sector in sustainable directions.”

One of the agricultural sector’s biggest SLLs to date has been a $2.1bn deal agreed by China’s Cofco International, in 2019. It was the largest evergreen credit facility for a commodity trader, topping a $745m sustainability loan for Gunvor Group, the Swiss-based commodity trader, in 2018.

Sustainalytics, a ratings provider, says Cofco hit its sustainability targets last year, including year-on-year improvements in the traceability of commodities, such as soy.

Earlier this year, Sustainalytics also verified a sustainability bond framework for Kellogg, the US food company. This framework sets out standards for Kellogg when issuing green debt to finance projects that can reduce its carbon footprint, and help promote sustainable supply chains.

For example, it says green bond proceeds can be used to fund efforts to help farmers cope with climate change. Kellogg also says it intends to source foods with certifications such as the Roundtable on Responsible Soy, a Zurich-based non-profit that promotes sustainable soy production.

“With sustainability-linked loans, that is one area that we have seen the bar really go up with the recent set of [LSTA] principles that have been released,” says Heather Lang, executive director of sustainable finance solutions at Sustainalytics.

Europe continues to dominate the SLL market. Lenders on the continent issued about $150bn of SLLs in 2020, more than North America and Asia combined, according to BofA. In 2018, Danone agreed one of the first such deals: a €2bn loan that included financing costs linked to the French food group’s ESG performance.

However, as the Kellogg and Cofco deals show, green debt is catching on across the world. In 2019, for example, Singaporean bank DBS signed a S$27m SLL with Chew’s Agriculture, one of the largest egg producers in the city-state. Chew’s will pay lower interest rates if it meets Humane Farm Animal Care (HFAC) standards.

Similarly, in South America last year, Tereos Sugar & Energy Brazil, a large sugar and ethanol producer in the country, announced a $105m SLL — the first of its kind for the sector. It promised to cut carbon emissions and water use in sugarcane production, as well as to increase its ESG scores.

Tereos will be granted an interest rate margin reduction for each year that it meets its sustainability targets, with a second party hired to verify the results.

According to CBI, Brazilian green issuance has been strong this year and the pipeline for bonds and loans is expanding. “The sustainability-linked mechanism is gaining popularity among Brazilian issuers and borrowers,” CBI says.

As the market for green corporate debt evolves beyond its core issuers in energy production, more agribusinesses are likely to embrace the products. “I anticipate that some of the trends we are seeing more broadly across the industry will be the same for food and agriculture,” Lang says. 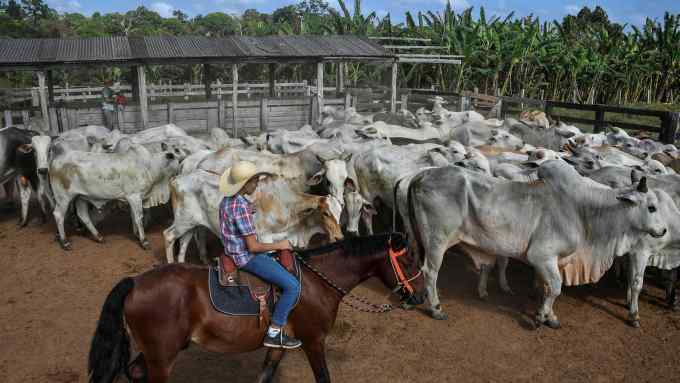