Five great gadgets for the beach

You’re unlikely to be mistaken for a member of the Hells Angels on the Cake Ösa. Quiet and friendly-looking rather than leather-jacket-sexy, this new release from Swedish startup Cake is nonetheless a lot of fun to zip around on.

The brand is by Stefan Ytterborn, a former Ikea employee and founder of action-helmet brand POC, who saw a gap in the market for green off-road motorbikes that can smoothly traverse the bumpiest of sand dunes and hairiest of mountain paths. There are several Ösa models to choose from: the Ösa Plus requires a motorbike licence and maxes out at 90kmph, while the Ösa Flex – really a moped – can be used with a regular driving licence but has a top speed of 45kmph. The Plus can travel about 84km, and the Flex 92km, between charges. Meanwhile, the new Ösa Work comes in Plus or Flex form; it’s basically a beefier update, boasting a 50 per cent bigger battery capacity than the originals.

All are low-slung, weigh less than 100kg and possess dirt bike-style wheels and stellar suspension. What the Ösa lacks in speed it makes up for in ease of use. It’s activated by entering a passcode on its handlebar-mounted screen; a companion app has GPS and can track your riding stats.

The best bit? The brand calls Ösa a “Swiss Army knife on wheels”, which is about right: it’s a versatile machine that has a mule-like carrying capacity and can be furnished with various attachments, from surfboard racks and extra seats to, as of this month, colourful windscreens. And once at your destination, its battery can be used to fire up personal devices, including phone, laptop, small stove and coffee machine. (If you intend to power several gadgets, and bigger appliances, I’d recommend the Work and/or the optional second battery.)

Pick from attachment packages such as the Carry (rack, basket, waterproof bag) or the Max (power converter, baskets, cargo net), or build your own. Cake Ösa, from £7,850, Work version from €8,850, ridecake.com

Philip Werner, Awake’s founder, calls electric surfing a “totally new sport”. Participants do not require Oahu-like waves for an adrenaline rush; they need only grip a handheld remote that Werner calls a “dynamite stick”. The new Rävik S 22 is Awake’s zippiest model yet. The jet-propelled board has a response time of 0.02 seconds and a top speed of 57kmph. It’s less buoyant than its predecessors, enabling sharper turns, and making it slightly more difficult for beginners to embrace than the Rävik 3, but novices should still be able to stand up within an hour or so. It lasts about 20 minutes with the standard battery, and can be ridden on waves as well as in sleepy bays. Awake Rävik S 22, from €12,900, awakeboards.com

With the TravelR, Colorado upstart RovR is challenging market behemoth Yeti for the mantle of most attractive summer cooler. Wrapped in waterproof nylon and a one-inch layer of high-density insulating foam, with antimicrobial lining, this chiller comes in lime green or navy, and folds flat for easy packing when empty. The 28-litre carrier can be used in two ways: by itself, as a roomy and capable chiller that can fit about 30 cans of drink with plenty of ice; or, if you’re serious about frosty beverages, you can slot the brand’s KeepR picnic basket/travelling cocktail caddy (complete with ice bucket, £249.95) inside for an Arctic-cold food and drink situation. RovR TravelR 30 cooler, $249.95, rei.com

The world’s niftiest and – apparently – lightest underwater scooter is about to shoot onto the market. At the size of your forearm and roughly the weight of a pineapple (1.4kg), the aluminium Subnado is fitted with a 500W electric motor. Although underwater scooters are typically used by divers, this one, from Chinese brand Waydoo, can add a splash of adrenaline to any marine activity: it can be strapped to the arms or legs of snorkellers or swimmers, as well as to surfboards and paddleboards. Controlled by a remote, it works to a depth of 60m and will propel you for about an hour before needing to be recharged (you can also add a camera mount). Waydoo Subnado underwater scooter, €399, waydootech.com

Combining the dimensions of an Evian bottle with Hulk-like toughness, the Beosound Explore water- and dust-proof speaker dares you to throw it around. In chestnut, navy or forest-green scratch-resistant, anodised aluminium, it is Bluetooth-compatible. Its sound is balanced if not overly powerful (to be expected with fun-size speakers), and you can adjust the sound settings on an app if you fancy more bass. Plus its marathon-like stamina rivals Haile Gebrselassie (and dwarfs its competitors), with up to 27 hours of playing time. Hang it from your tote. Blast Kygo’s latest summer hit. And if it gets sandy, just take it for a swim. Bang & Olufsen Beosound Explore, £169, bang-olufsen.com 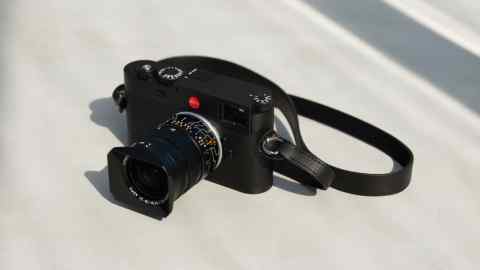