Cult Shop: the Somerset duo weaving stories into their rugs

Mark and Sinead Hanlon were working in London in 2012 – he as a web designer, she as an account manager at M&C Saatchi – when they first had the idea of creating rugs that were a little bit out of the ordinary. “We thought it would be fun to commission some edgy artists and designers such as Anthony Burrill and Paul Insect to create one-off designs,” says Mark. They had them made up into rugs and exhibited them at Shoreditch’s Truman Brewery. To their delight, these renegade rugs sold out, and the exhibit made the pages of Creative Review. Within two years, they had a successful range of pop-art children’s rugs under their belts, and from there they launched Studio Knot.

Each rug designed by their Bruton-based studio – “such amazing old architecture, history and a lovely community; there are so many creative things going on”, says Sinead – is unique and hand-knotted in one of three mills in India, Nepal and Iran. Their client list includes The Conran Shop, P Joseph, Locke Hotels and Ducie Street Warehouse in Manchester. But it’s Studio Knot’s creations for private homes that best showcase its skill for weaving narratives into its commissions.

London restaurant publicist Gemma Bell and her husband, Ben, commissioned the studio to create a twist on a Persian rug featuring brutalist buildings. Traditional from afar but contemporary up close, it made for a brilliantly 3D design. “Every building that appeared in that rug – the Barbican, the South Bank, Balfron Tower, Centre Point – was somewhere they had visited, worked or lived in, so it was really significant for them,” says Mark. “They were very closely involved in its creation, which made it particularly good fun.”

Studio Knot has also produced designs inspired by studies of moonlight on the surface of rocks and 1980s arcade games. For the Riverside development in Manchester, it created a rippling abstract of the River Irwell, which was once the main artery for the city’s industrial district.

The design process begins with a visit to the space where the rug will sit, to allow Sinead and Mark to get a feel for the architecture and the light. “It’s important to us that it has a real connection to the space or the person – that it’s not just a pretty thing on the floor,” Sinead explains.

Back at their studio, the pair sketch out possible forms and colours. The workshop is a riot of colourful clutter: along one wall, mounds of rug samples jostle for space with spools of thread, art books and swags of Tibetan prayer flags. On the other, two large rugs hang awaiting completion. “We recently bought our own loom and are learning the art of weaving ourselves,” says Mark. Designs are then turned into virtual samples and sent to the mills where they are rendered in wool, mohair, horse hair, silk, hemp, cactus leaf and many other yarns. There are more than 1,400 colours to choose from and multiple pile heights and knot sizes to consider. The pile can also be cut to create textures and patterns in three dimensions – the River Irwell rug being an example. 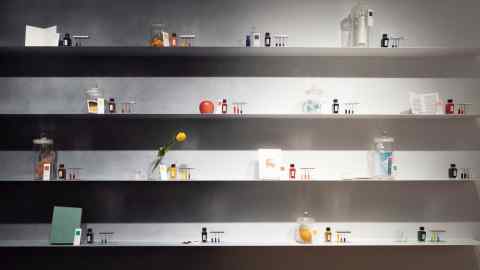 The couple are working to make the process as ethical and sustainable as possible. They have introduced a fibre made from recycled fishing nets and PET bottles to their yarn selection, with other materials available on request: a rug for the Whitworth Locke hotel in Manchester used recycled saris in the weave. A typical rug takes between three and six months from concept to completion – and clients are kept updated with news and photographs of their rug’s creation along the way. One even had their photographs made into a coffee-table book.

“A well-made rug can last hundreds of years so it’s important not to be led by trends,” says Sinead. “Your rug should tell a story that’s personal – it should be a real heirloom piece.”