If you think the same, join us
Watches & Jewellery Retail & Consumer industry

Driving through London to his Hatton Garden metal-plating workshop during the pandemic — instead of catching his usual train — was surreal for Charlie Charalambous. “It was a ghost town . . . I’ve never experienced anything like it in my whole career,” says the 55-year-old owner of Buzzforce, whose clients include Tessa Packard, the contemporary fine jeweller in Chelsea. Most of the workshops were shut although some smaller shops carried on with fewer hours and fewer staff.

Fast forward to today and London’s jewellery quarter — home to a diamond-trading and jewellery industry since the mid-1800s — is recovering after the lifting of lockdown restrictions. With some workers returning to the City, and an end to the limit on guest numbers at weddings, demand is rising — especially for rings.

The streets have “got steadily busier but the area is still quieter than it was”, says Brett Afshar, owner and managing director of the Hearts of London Group.

Jewellers are now optimistic about the area’s recovery, as shown by the investment in new spaces. Afshar has spent £1.5m on a lease and renovations for a three-storey building in Hatton Garden, with a further £200,000 due annually for rent and business rates. The Queensmith ground floor shop opened in April, with diamond-setters, goldsmiths and other specialists scheduled to move in by the end of September.

Empty office space is also being adapted by newcomers. Olivia Madigan-Shea, a jewellery designer, has moved from Mayfair into a first-floor studio in Back Hill, north of Hatton Garden, that she shares with two friends. “I want to be close to my gemstone dealers, close to my workshops and I need to be within walking distance of everything,” she says.

More are now joining the London Diamond Bourse, too, which now has more than 200 members, says Alan Cohen, its president. “People have given up shops, people have given up offices and it’s worked out easier for them to take permanent seats here for a lot less money,” he explains. Membership is up by around 7 per cent. A three-tier membership is being introduced by the industry association to tempt others to join. 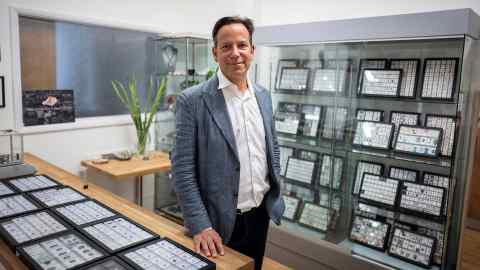 The way dealers do business is changing, as well. Cohen, who has been dealing in gems for over 40 years, used to make most of his purchases abroad. But travel restrictions put a stop to going in person. “I would go to Russia once a month,” he says. “I haven’t been now for two years.” He instead buys via videoconferencing. With no mines and few polishing facilities in the UK, “we have had to be reliant on technology to be able to purchase,” he notes.

This switch to online trading has also led to changes in one of Afshar’s bricks-and-mortar shop in Greville Street, off Hatton Garden. He has had to make space for consultations via Zoom and for live-streaming events “which are increasing in popularity,” he says.

However, high rents caused many workshops to move during the pandemic — and some folded.

Rosh Mahtani, the founder of Alighieri contemporary jewellery, says the lack of manpower means she is less able to find new ways of working or new products.

“We still get there; it just takes us longer and it’s a harder struggle,” she says.

For Charalambous, however, fewer workshops have led to new clients and more work for Buzzforce. “We’ve got queues outside,” he says. These days, his team — who returned from furlough in August — are under pressure to work fast.

Garry Williams, the UK general manager of Presman Mastermelt, a precious metal refiner, still has his 40 Hatton Garden employees on a rota to avoid too many being on the premises at one time.

“There is still this bubble mentality,” he says. “If we get Covid and they do have to isolate, it will close us down.”

While businesses are cautious they are also looking forward to new customers next spring when Hatton Garden becomes one of London’s best-connected areas.

Footfall is expected to increase with the opening of a new east-west underground line, and the Museum of London is set to relocate from Barbican to nearby Smithfield Market. At Farringdon station, passengers on the new Elizabeth Line will see a ceiling made of diamond-shaped slabs inspired by the jewellery quarter.

“Shops should get more sales — and they go to the workshops to have [the orders] made,” says Daniel Seller, owner of Loupe Fine Jewellery and vice-president of the London Diamond Bourse.

“The population [of the workshops] would increase again, the rents would, funnily enough, get driven down because the jewellery industry would be able to take over again,” he says. “The landlords would see that, at least, they have tenants who want their premises.”