Why has the backbar gone on mute?

Instead of showing us his trophy bottles, the modern bartender wants to woo us with conversation instead...

​​You can tell a lot about a place by its backbar – the collection of spot-lit bottles arrayed behind the bartender’s head. It’s where an establishment advertises its prize spirits, specialities and talking points. A backbar that’s curated well speaks volumes. But one done badly is a Tower of Babel – a cacophony of clashing brands. And that’s one reason why some of the world’s most interesting bars are now putting the backbar on “mute”. The Bauhaus-inspired interior of the Bar with Shapes for a Name in east London has no backbar at all. Instead, the stained-wood alcove where the bottles should be is left empty, as a “frame” for curiosities like the chess set belonging to co-owner Remy Savage. “If you put 300 bottles out in front of people, they will just go for what they know,” says Savage, who is also creative director of Le Syndicat in Paris, “but this way you can have a conversation with them. The less information you give them, the more attention you get.”

Down the road at Tayer & Elementary, the industrial-style drinking hole belonging to bartending superstars Alex Kratena and Monica Berg, the usual beauty parade of bottles is nowhere to be seen either. “I personally don’t wish to pollute the space we put so much effort into designing and building with hundreds of brands,” says Kratena. The pair’s own brand, which includes bottled cocktails and lifestyle ephemera, is discreetly in evidence, however – a sign of the increasingly strong commercial identity that some bartenders now wield.

Operation Dagger in Singapore was one of the first to go backbar-free. “I wanted to bring that element of surprise back that made me fall in love with bars in the beginning of my career,” says co-founder Luke Whearty. His new venture Byrdi, in Melbourne, doesn’t have a backbar either – designed, he says, to “shift the focus more from the spirits and alcohol to the seasonal produce we are using in an effort to put the spotlight on small producers in Australia.” 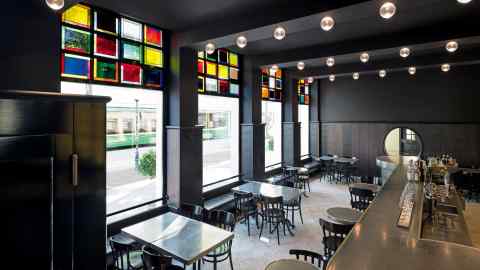 A bar without familiar brands can be disorientating – and some use that to great effect. At the secretive Berlin speakeasy Buck and Breck, all the spirits are served from identical-looking bottles marked with colour-coded stripes that only the staff understand. Buying a drink becomes an act of trust.

For Hong Kong’s thrillingly clinical-looking bar Penicillin, the motive for getting rid of the backbar wasn’t just aesthetic – it was environmental, too. The bar signed up to Ecospirits, a company that distributes spirits in refillable vessels – an eco-friendly format I’m almost certain we’ll see more of in the future.

A bit of hush, it turns out, can also be a good way to make yourself heard.