PAD 2018 reviewed — our highlights from the fair

Among the razzle-dazzle, it is the quieter works that stand out

The Pavilion of Art and Design, which pitches its big white tent each October in London’s Berkeley Square, is a shape-shifter, modifying its offering for each edition. Visitors never quite know what to expect, apart from a range of spectacular collectibles, mostly dating from the early 20th century to the present.

The fair’s founder, Patrick Perrin, says he likes to offer a few surprises. And this year he decided to invite four contemporary jewellers to the fray, including Lorenz Bäumer, a former artistic director at Louis Vuitton and Chanel, and the Lebanese Walid Akkad, whose large-scale work certainly doesn’t pull any punches. They brought even more bling to a fair that can feel like a pretty sparkly cabinet of curiosities — or a walk through a millionaire collector’s house in Monte Carlo. Among the razzle-dazzle, however, it is sometimes the quieter works that ultimately stand out, such as the ones below.

At the Spanish gallery Mayoral, a work by Eduardo Chillida (1924-2002) from 1990, made of pieces of paper suspended by string from four nails, is one of the artist’s works exploring gravity, a subject he pursued for around 15 years. If his huge steel sculptures can appear to float in space, it’s fascinating to see how these light paper reliefs seem to occupy space so convincingly.

Architect and designer Achille Salvagni is known for his luxurious and exquisitely crafted yacht interiors. But he also chose to present the work of Bice Lazzari (1900-81) on his stand, who during her life moved from classic portraiture to abstract minimal compositions of circles and lines, via handmade string bags and belts that reflect the same compositional concerns. Lazzari was relatively unsung in her lifetime, and unknown outside her native Italy, but interest in her work is gradually growing.

Stockholm’s Modernity gallery always presents some rare early 20th-century pieces; this year’s was a PH2/2 lamp designed by Poul Henningsen in 1931 to be used on a piano. The three-tiered glass shade shows the early development of a design language which later became well known in Henningsen’s now famous Artichoke lampshade. This piano lamp is a rare find — they were only produced in this form between 1931 and 1933. Later versions do not have a bronze cap holding the shade, and are not worth the same price.

A few years ago, the British designer Peter Marigold spent some time in Japan working with the master woodworking company Hinoki Kogei. One of the results is the highly sculptural Dodai bench, shown on Sarah Myerscough’s stand, and created from a single cypress trunk cleaved in two lengthways. Its top is made from reeds woven over dowel rods, by a traditional Japanese method. Though the design can be repeated, each is as unique as the individual tree trunk.

Rose Uniacke happily mixes Art Nouveau mirrors and Korean patchworks on her stand, and this year added the ceramics of the Istanbul-born Alev Ebuzziya Siesbye. Now in her 80th year, and still making, Siesbye works exclusively on pots in stoneware so fine it almost feels like paper. Her training was a rigorous one in Germany, and her influences come from ancient Cycladic art and Anatolian sculpture — apparently a perfect combination.

Alex Hull is a designer who doesn’t like to leave anything to chance. But a project run by London gallery Fumi with the academic and curator Jana Scholze persuaded him to go against his usual principles. The Line chair emerged from 50 freehand drawings made by Hull, from which he selected his favourite, and is created from a single 180m tube of bronze. Furniture as conversation piece, par excellence. 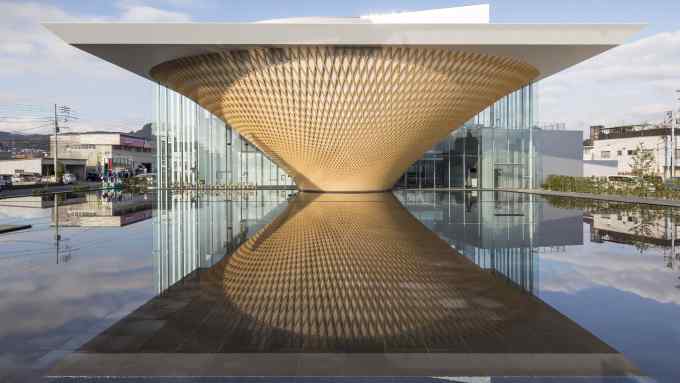