Military briefing: which weapons has Ukraine received and how many more does it need?

John Paul Rathbone in London and Roman Olearchyk in Kyiv

Senior Ukrainian officials have bluntly described what they need to prevail on the battlefield, speaking ahead of a meeting of western defence ministers on Wednesday that Kyiv hopes will speed up the delivery of military aid.

Mykhailo Podolyak, a leading adviser to President Volodymyr Zelenskyy, laid out a bold shopping list to tackle the main equipment shortages and repel Russian forces that are pounding Ukrainian soldiers with heavy artillery barrages in the eastern Donbas region.

“Being straightforward — to end the war we need heavy weapons parity,” Podolyak said on Monday, detailing what that meant in a tweeted list that included 1,000 155mm howitzers, 300 multiple-launch rocket systems and 500 tanks.

Western countries have pledged copious amounts of military as well as humanitarian aid since Moscow launched its assault on Ukraine more than 100 days ago. However, far less than those committed funds have been spent on military equipment, while logistics and training issues mean kit worth even less has arrived on Ukraine’s front lines.

“For months now, the US and other allies know the situation,” said Andriy Zagorodnyuk, a former Ukrainian defence minister who advises the government on security, referring to Kyiv’s forces having insufficient assistance to prevail. “I sincerely hope that we are going to hear something on Wednesday.”

At the first round of the so-called Ramstein format defence talks held in April at a US air base in Germany, US defence secretary Lloyd Austin pledged that western countries would “keep moving heaven and earth” to supply Ukraine with weapons to defend itself. A new round of such weapons supply co-ordination talks will take place on Wednesday in Brussels on the margins of the Nato defence ministers’ meeting.

Yet Ukrainian fighters are now running short of basic munitions such as artillery shells. A stockpile of 152mm shells that it has used in its Soviet-era artillery is all but exhausted, leaving it to rely on Nato-issue 155mm equipment.

Podolyak estimates Ukraine needs 1,000 155mm howitzers — long-range artillery launchers — to defeat Russia’s forces. Yet the west has provided or pledged only about 250 howitzers, according to Oryx, a respected open-source intelligence outfit that tracks battlefield losses and supplies.

On Sunday, Ukraine’s commander-in-chief, General Valerii Zaluzhnyi, pleaded in a phone call with General Mark Milley, chairman of the US joint chiefs of staff, for more and faster deliveries of military aid. “Despite everything, we keep holding our positions,” he told his US counterpart, reiterating Kyiv’s need for “more 155mm calibre artillery systems in the shortest possible time”.

A similar disparity exists for other heavy weapons, such as tanks and multiple rocket launch systems, which have a longer range than conventional artillery. Earlier this month, the US and UK pledged a handful of advanced MRLs between them.

“Ukrainians’ skilful use of artillery has enabled them to hold the Russians in check,” said a western defence adviser. “They are showing great ingenuity in integrating new civilian technology”, such as Elon Musk’s Starlink satellite system, to enable battlefield operations.

But he added: “Their weapons and ammunition supply problems are acute.”

Ukraine says its casualty rates have soared to as high as 200 soldiers killed in action on some days. Allow for those wounded or missing in action, and the daily toll could be as high as 800.

In its daily conflict monitor, Rochan, a military consultancy, wrote that it believed Ukraine’s broadcast of such alarming casualty rates, combined with its cries for greater military supplies, was designed “to force the west to speed up the deliveries of military equipment and ammunition”.

Ukrainian officials bristle at the idea it is losing. “We are not doing bad at all,” Zagorodnyuk said. “We are holding [the Russians] in [the Donbas] with an equipment ratio of at least 10 to one . . . they still cannot move and they are losing people as well.”

Being straightforward – to end the war we need heavy weapons parity:

Contact Group of Defense Ministers meeting is held in #Brussels on June 15. We are waiting for a decision.

Even so, defence officials and analysts agree that Ukraine needs more weapons and more time to train reservists if it is to sustain the fight.

Among the difficulties it faces, said Michael Kofman, lead Russia analyst at the CNA think-tank in the US, are western countries’ own supply problems, some countries’ unwillingness to supply weapons and the time it takes to deliver the weapons to the front lines and for Ukrainian fighters to learn how to use them.

“A good deal of equipment has been promised to Ukraine and you see quite a bit on the battlefield,” Kofman told a War on the Rocks podcast. “But there are also significant growing pains in assimilating and using it . . . For one, maintenance is a real issue in sustaining this equipment.”

Such issues might be contributing to a sense in Moscow that it could win the war, analysts added. Western differences over military aid, and Russian progress in the Donbas based on “brute force and [by] accepting high losses” among its own troops, reinforced that impression, said the defence adviser.

The west is also struggling to cope with a cost of living crisis, with many European countries also absorbing high numbers of Ukrainian refugees. Russia has inflicted such economic pain on the west, via higher energy and food prices, “that western leaders are considering how to persuade [Russian president Vladimir Putin] to allow the export of Ukrainian grain — a valuable lever of power”, said the adviser.

“Nothing sufficiently unpleasant has happened yet to disabuse him of the view” that Russia can win, the adviser added.

Video: Ukraine's battle of the airwaves

Explore the series
READ MOREWar in Ukraine: free to read
What is America’s end-game for the war in Ukraine? 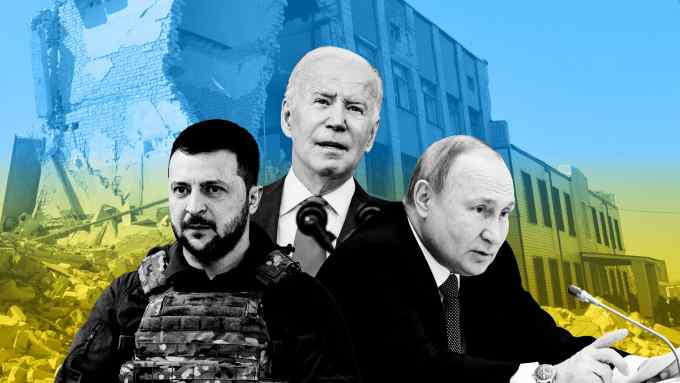