My Favourite Pieces: Designs that display the art of storytelling

Susan Cummins is interested in “jewellery that makes you think”. When she began her mission in the 1980s to give art jewellery a platform — and clients of her gallery near San Francisco the chance to buy into an exciting and different art form — she “didn’t wear jewellery then and I don’t wear it now”.

But she does make exceptions if she is attending a special event where she might be expected to showcase a piece from her 500-strong collection of the cream of European and US art jewellery. Her championing of jewellery’s artists also led her to start the Art Jewelry Forum in 1997, an online platform that is about “establishing an argument for why this jewellery was particularly interesting”.

Since closing her gallery in 2002, she has dedicated her time to collecting. She likes to get under the skin of the makers, talking to them about their processes, why they have chosen particular materials, and what they are trying to say.

She defines an art jeweller as “making their own work, not farming it out to fine jewellers to make it for them; they have intelligent reasons for using the materials they do, they are telling a story and doing it in a very clever way”. She shares some of her favourite pieces from her collection over the years.

“There are a few people I like to collect in depth and the German jeweller Dorothea Prühl is one of them. I love the feeling of her work. It is very spiritual, very primitive, but incredibly skilled in a subtle, sly way.”

Yet when Cummins first saw the necklace, “I didn’t really understand it or even like it that much”. However, the longer she looked, the more she loved it. “Each section replicates, in an abstracted way, the feathers of a hawk’s wing. Dorothea is inspired by the animals she sees in the remote retreat where she works. She was trained in the Bauhaus school, and its simplicity of design, like a lot of contemporary jewellery, is inspired by tribal traditions.”

Since she won the MacArthur Foundation“genius” prize, worth $625,000, in 2016, the work of the jeweller, sculptor and performance artist Joyce Scott has been in demand by collectors. So Cummins is particularly pleased to have “talked her out of this, her personal necklace”, which records important moments in her life, the places she has been, the people she has met. “She makes political, social and cultural statements through her work. She has dealt with rape, with racism. She likes to say she is making pieces for those people who had the ‘cojones to wear them in public’.” The first time Cummins saw her work was many years ago at an exhibition that included four pieces of Scott’s jewellery made in response to the Jonestown massacre in 1978. “It took my breath away that jewellery can be used to say such powerful things. Joyce is the pre-eminent conveyor of power in a piece of jewellery.”

“It is a funny but tragic recreation of Venus on a half shell,” says Cummins of this piece. She considers Manfred Bischoff to be one of the most interesting of all European contemporary jewellers — German by birth, he was also a citizen of Italy. “His work is very emotional and it always has psychological underpinnings.” The brooch was the last piece of jewellery he made. Cummins bought it after his death in 2015. She thinks of it as a tragic piece because it was made at a very difficult time in his life. There “was some bitterness there in his work; a very cynical aspect. He has unplugged Venus from the source of her eroticism. This was how he was thinking about women. It was an aggressive act.”

“I used to show Keith Lewis’s jewellery at my gallery and I had always kicked myself for selling this piece. I believe, along with Joyce Scott’s piece, it is one of the most significant examples of American jewellery ever.” Its theme is a poignant one. Lewis is gay and the necklace is a tribute to those he knew who died of HIV/Aids. “It is a memorial necklace. He made a head of each person he knew. Each head is attached by wire, but he has also depicted himself with glasses in the necklace, attached by string.” Cummins says it is extremely uncomfortable to wear. “The heads poke into you as you move. But that is the point. The deaths of all these people and the Aids crisis was a terrible catastrophe. It was a failure of government and others. This piece was made to remember this time and his friends.”

Cummins describes Swiss art jeweller Bernhard Schobinger as a “contrarian”. “He was a punk, always pushing the limits of what jewellery could do. He would use asphalt from the street. I am really interested in the ways jewellery can be powerful, shocking and strong, what statements it can make.” This example of his work is made from old bottlenecks he found near Okinawa in Japan. The bottles were smashed and left in situ, at the mercy of the elements for a year. “He is a dadaist of the contemporary jewellery world,” Cummins says. “He uses a lot of found objects, many of which he dives for at the bottom of Lake Geneva.”

Cummins added this necklace to her selection to show that art jewellery does not always have to be powerful but can be colourful and pretty, too. Verena Sieber-Fuchs, based in Zurich, is also well known as a textile artist and this shows in the way she has woven her found elements together to create this piece of jewellery. “It is fascinating to look at. The back of the piece is almost more interesting than the front,” says Cummins. “It is a patchwork of a zillion stitches made from translucent threads. A beautiful recycling project.” 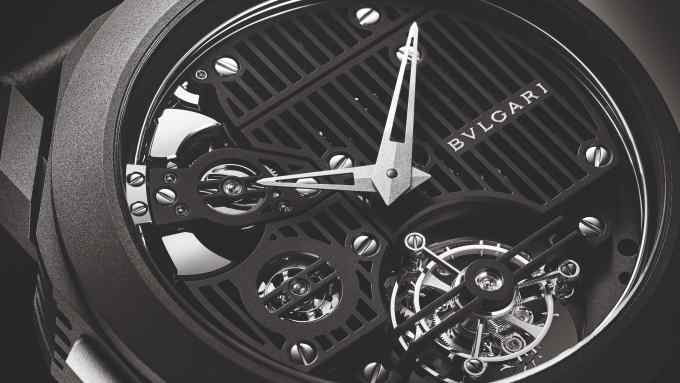