Meet the SheWarrior athleisure founder with big ambitions for her line

It’s been a sporting summer in which female defiance has co-mingled with self-protection. From Simone Biles stepping away from the US Olympic women’s team gymnastics, then making a surprise return to win bronze on the balance beam, to tennis star Naomi Osaka choosing to take “some personal time with friends and family” to manage her mental health, female sports stars are reclaiming control over how and when they perform. It’s a change welcomed by Natlyn Jones, founder of SheWarrior, a sustainable women’s athleisure brand based in Florida. “You know how society always tries to put everyone into a box? Whether it’s your gender or age or where you come from?” she says when we discuss the company’s mission. “I want people to feel like they have no boundaries.”

The creation of SheWarrior in 2019 was both an accident of marriage and an inevitable leap for Jones, who studied criminology and psychology at college, and has always had a taste for entrepreneurship. “It feels like we all have this fighter within us, whether we’re a stay-at-home mum or an entrepreneur,” she says from the home she shares with her three children and her husband, former world champion boxer Roy Jones Jr.

Having started training with her husband, Jones found boxing a huge mental and physical release – and support. But finding that she was spending increasing amounts of time in sportswear, she wanted to create a brand that was stylish, built on sustainable pillars, and which gave back to the community. The resulting range – made-to-order in fabrics created from 100 per cent upcycled plastic bottles, and dyed using a water-free process – is a celebration of female strength: designs include camo skin crop tops ($70) with SheWarrior logos, monogrammed snake-print leggings ($85), and block colour hoodies ($90) spelling out “SheWarrior” down the arm. “Roy has always had the recognition – he’s nine-times world champ”, she says. “But sometimes the one in the corner, who holds it down in order to allow a person to achieve these goals, they’re the unsung hero.” Designs are sold via her online site, with three new stockists being announced later in the year.

Jones describes the baptism into the pro boxing world as eye opening: “The politics, the business behind it – you have to grow up fast in order to not drown”, she says. Her hope is that SheWarrior evolves into a network of women who support each other – whether they’re going into boxing, or any other sporting endeavour. The brand works closely with youth mentoring and support organisations including Pace Center for Girls. “I want you to feel strong, beautiful and I want you to feel” – she pauses to search for the word – “undefined”. 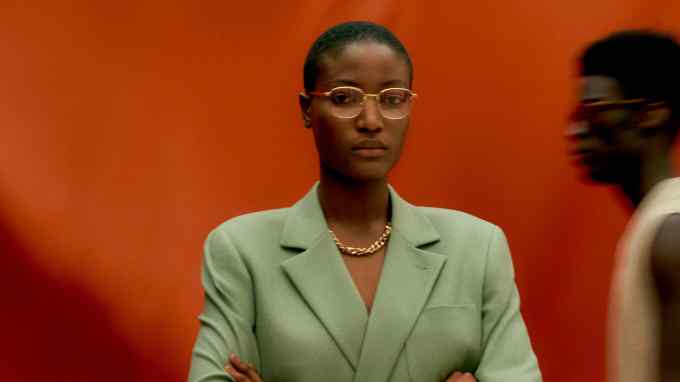