The best designers make you want to join their gang

Designer Natacha Ramsay-Levi’s SS19 Chloé was called “hippie modernism” and it was full of Persian-carpet jacquards, ikat and silk. “I wanted the interpretation of hippie to be quite literal,” said Ramsay-Levi of her take on New Age bohemia, which took a journey via “nomads, Ibiza and Medea”.

The collection was long, fluid, textural and pretty, with rope belts, waistcoats, sandals and skirts. Ramsay-Levi had wanted the collection to recall summer vacations and the souvenirs and trinkets one picks up en route.

It also had ideological ambitions: “I think the hippie movement is important right now, in its focus on sensuality and community and the environment. I wanted to take the symbols of that thinking and bring them into the city.”

Certainly there was a bazaar’s-worth of trinkets: cork-soled croc sandals, golden cuffs that clasped the ankle, pendants, big dangly earrings and stacks and stacks of rings. Ramsay-Levi has been building the accessories at a pace since starting at the brand last year, and the gewgaws here had some serious commercial appeal.

Likewise the bags, many of which came with new branding: the single letter “c”. It’s the third bit of “c” hardware I’ve seen on bags this season. Paul Surridge has done one at Cavalli, as has Hedi Slimane at Celine. The Chloé version was similar but had kept its serifs. (Of course, Chanel has been doing the “c” thing forever. Buy one, get two c.)

In all it was a great collection. It was possibly a few looks too long, but the first half in particular was especially pleasing. Neither overly conceptual nor complicated, its message was clear. In only three collections, Ramsay-Levi has developed an aesthetic that is both interesting, “cool” and easily accessible. It’s an aesthetic I’ve invested in — quite heavily — myself. I like it because it is smart but not too uptight, professional without being too polished, seductive without being too sexy, and it comes in lots of browns (Ramsay-Levi was certainly first on that tip).

But, truthfully, I’ve invested in Chloé because I think that Ramsay-Levi herself is cool. She represents things — artsy, French, bohemian — that I aspire to. It’s a not dissimilar feeling to the one I had about Phoebe Philo’s Céline. In buying her collections, I’m part of the gang.

New York magazine critic Cathy Horyn put it perfectly in a recent article when she described Ramsay-Levi as offering “a ready-made sensibility”. Ready-made is right. The designer offers a full wardrobe in which to get on with your life, and I trust her instincts.

I know it’s slightly undignified to admit you have a fashion crush, but there you have it. I was a Philo-phile (as the cult of the former Céline designer was named). But then Philo abandoned fashion, and I’ve had to look elsewhere. I’ve been shopping around quite widely, but of all the designers to choose from, I’m relying on Ramsay-Levi to tell me what to wear.

I’d happily invest in Atlein, if only I could find a stockist that sold it. Antonin Tron founded the brand in 2016, having worked at Balenciaga. This summer he took home the Andam Fashion Award’s grand prize, which included €250,000 prize money and two years of LVMH mentoring.

Julien Dossena’s SS19 for the Puig-owned Paco Rabanne was rather beautiful. Like Chloé, it also had the flavour of the souk: medallion belts and a melange of fabrications all leaned to a collection that was global in feel. The famous Paco chainmail had been used very sparingly: often the discs were disembowelled and turned into circular rounds. Other times, they were clipped into cute little flower shapes, or mixed in with crystals and worn like a shroud.

After the rustling simplicity of his previous collection last season, Dossena’s layered fabrications — knitted lurex, floral silks, tie-dye T-shirt, sari skirt embroidery, silver quilting, brocade crop-tops, pale grey suiting, chainmail — came as quite a surprise. It could have been too much. But Dossena had kept things in check with a strict, narrow line. Even in its variety it had curious conformity. More clothes to crush on. What a treat.

For all of our fashion week coverage, visit ft.com/womenswear 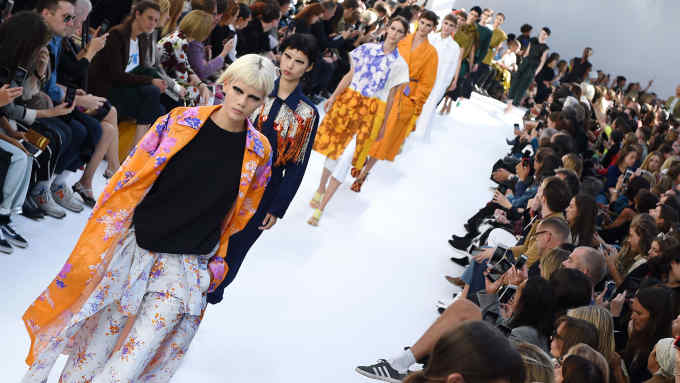