We’ll send you a myFT Daily Digest email rounding up the latest Geopolitics news every morning.

The opening of Davos 2022 was meant to signal a return to normalcy. Instead, the cancellation of the World Economic Forum’s annual in-person jamboree has sent the opposite message. Two years after its onset, the global coronavirus pandemic is still dominating world affairs.

However, an important divergence over how to cope with the pandemic has emerged between China and the world’s other big economies — which may grow in significance over the course of 2022. China remains determined to pursue a zero-Covid strategy. By contrast, the US, the EU and most of the large Asian economies are having to learn to live with Covid-19.

The government of Xi Jinping points to a much lower death toll as a vindication of China’s strategy: the official Chinese toll is still under 5,000 deaths, compared with over 800,000 in the US. But persisting with this approach involves punishing lockdowns in big Chinese cities, such as Xi’an, as well as extreme restrictions on travel, which have hugely reduced interaction between China and the outside world. The zero-Covid goal may also become harder to achieve if new and more transmissible variants of Covid emerge.

The broader danger for the international system, though, is that Covid will widen the existing economic and geopolitical divides between Beijing and the west. That, in turn, could add to strains on the world trade system — as well as increasing the danger of military tensions over Taiwan and the South China Sea.

A more immediate threat of conflict is posed by Russia’s build-up of troops on its border with Ukraine. Western intelligence analysts began the year believing that it is more likely than not that Vladimir Putin, Russia’s president, will give the order for an attack on Ukraine, probably in early February.

Although it is possible that intensive diplomacy between the White House and the Kremlin — with some input from the EU — will defuse the crisis, Russia described last week’s talks in Geneva and Brussels as “unsuccessful”.

The scale, aims and impact of any invasion of Ukraine remain unclear. The likeliest scenario seems to be some sort of Russian offensive in the east of the country with the aim of bolstering the separatist movement there, or even annexing part of Ukraine, following the model of the annexation of Crimea in 2014. Broader Russian goals might include causing the government of Ukraine to collapse and be replaced by a new, pro-Kremlin administration. Making the US and Nato look weak and discredited are also longstanding Russian goals.

However, even a limited military assault on Ukraine would carry substantial risks for Putin. After the annexation of Crimea, the Russian leader exulted that he had achieved his goal without a shot being fired. But an invasion of eastern Ukraine is likely to be a bloody affair. The US government has also threatened Russia with severe economic sanctions.

The threat most feared by the Kremlin would be the exclusion of Russia from Swift, the international money-transfer system. This could have a devastating effect on Russian international trade. But the US might still hesitate to use the Swift weapon because the EU remains very dependent on imports of Russian gas — and energy prices are already rising sharply in Europe, which is likely to cause political grief for its leaders.

Europe, in any case, faces a year of political uncertainty. In the past decade Angela Merkel, the former German chancellor, was the dominant political figure in the EU. Her careful, deliberative style helped it weather a series of crises, including Greece’s debt meltdown, Brexit and the Trump presidency. But Merkel has now retired from politics and her replacement Olaf Scholtz has yet to be tested by a serious crisis.

In Merkel’s absence, Emmanuel Macron, the president of France, has an opportunity to set the European agenda — particularly given that France will hold the presidency of the EU for the first six months of the year. But Macron faces a tricky re-election battle in April. He is likely to defeat either of the far-right candidates, Marine Le Pen or Eric Zemmour, if they make it to the run-off. A contest against Valérie Pécresse, the standard bearer of the centre-right, could be considerably closer.

Whatever the eventual outcome, the French presidential election campaign looks set to be bitter. The far right’s emphasis on issues of identity and immigration is likely to drive debate, in an atmosphere already radicalised by protests against coronavirus restrictions.

April or May will also be when elections take place in Hungary, which could put an end to the premiership of Viktor Orban, the self-styled champion of “illiberal democracy” within the EU. Orban’s high-profile opposition to migration and “globalism” — as well as his avowed cultural conservatism — have raised his profile in the US, where has been endorsed by Donald Trump.

Trump himself will be looking to the midterm elections of November 2022 to deliver a powerful blow to the Biden administration — and to prepare the ground for a possible comeback in the 2024 presidential election. With inflation rising and the pandemic still not under control, it seems likely that the Democrats will indeed lose control of both houses of Congress in November.

Both Trump and Orban have capitalised on fears of illegal migration. That issue is likely to rise up the political agenda again in 2022.

The inability of the WEF even to convene in person, for a second year in succession, is an unfortunate symbol of the inability of world leaders to address the world’s most dangerous problems

The situation on the US southern border remains chaotic, with large numbers of migrants from Central America sparking bitter public debate on the best policy response. The economy of Afghanistan is close to collapse and, with famine looming, millions more refugees are likely to try to leave the country.

Conflicts in Africa are also likely to cause mass casualties and economic damage, driving flows of migrants towards Europe. The war in Ethiopia, Africa’s second most populous country, could intensify. Sudan is threatened by political turmoil, too, as civilian demonstrators press for the military to leave power.

In normal times, the World Economic Forum would feature numerous sessions on topics such as these, in which business leaders, academics and international officials would thrash over the issues — as part of Davos’s often-mocked commitment to “improving the state of the world”. The inability of the WEF even to convene in person, for a second year in succession, is an unfortunate symbol of the inability of world leaders to address the world’s most dangerous problems.

Get alerts on Geopolitics when a new story is published 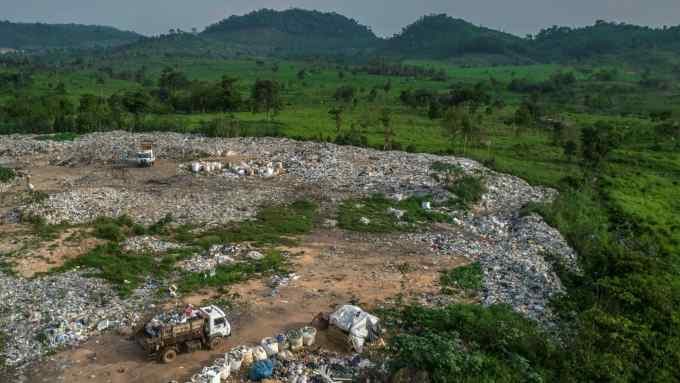