David Keohane in Paris, John Reed in Bangkok and Katrina Manson in Washington

Sign up to myFT Daily Digest to be the first to know about Oil & Gas industry news.

Total and Chevron have suspended cash dividends to Myanmar’s state-owned oil and gas group as the energy majors seek to limit funds flowing to the country’s military junta.

Foreign energy companies have been under growing pressure from anti-coup activists since the military overthrew Aung San Suu Kyi’s government on February 1 and cracked down on protesters and opponents.

Total of France is the largest shareholder and operator of Myanmar’s main Yadana offshore gasfield and the country’s gas pipelines. Other shareholders are Chevron, Thailand’s PTT and the state-owned Myanmar Oil and Gas Enterprise (MOGE).

On Wednesday Total said that, following a shareholder vote earlier this month, the dividends to MGTC, the pipeline company in which MOGE owns a 15 per cent stake, were being suspended.

Total did not say how much it would amount to. A person familiar with the matter said the total dividends from the gas company were worth about $350m in 2020.

The whole game here is to keep the gas operations running but stop the money.

The announcement did not include a vow to withhold taxes or gas deliveries from the field, worth close to $175m in 2020, according to people briefed on the decision. Total said it was “maintaining the production of gas . . . so as not to disrupt the electricity supply that is vital to the local populations of Myanmar and Thailand.”

Human rights groups and the National Unity Government formed by allies of Aung San Suu Kyi working from hiding or exile have called for sanctions to be imposed on MOGE, and for Total and Chevron to withhold all payments to the company and the state by holding them in escrow.

Patrick Pouyanné, Total’s CEO said in April that withholding tax payments would put its employees at risk of prosecution. Abandoning the project would also imperil gas supplies to the largest city Yangon and to western Thailand, he said. It would also put Total’s staff at risk of “forced labour” if the junta were to take over production.

Chevron said it supported Total’s decisions and warned “any action we take in breach of agreements and laws may open the door for another company that doesn’t share our values to take our place”. Both groups said they would comply with international sanctions.

The US, UK, EU, and Canada have imposed punitive measures on junta members, military owned conglomerates, and industries from which the ruling generals and their families profit, such as gemstones. 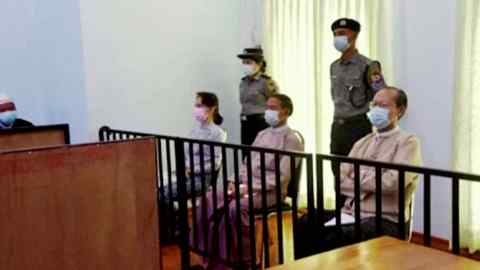 John Sifton at Human Rights Watch, one of several groups that has campaigned to stop gas payments to the junta, welcomed Total’s move as a “first step”. “It’s the first domino to fall,” he said.

The Biden administration has increased US punitive actions against Myanmar. Last week, it imposed sanctions on the military regime’s state administrative council (SAC), an entity which the US Treasury said the junta had created in order to support its unlawful overthrow of the democratically elected civilian government. That made it easier for gas companies to legally justify stopping payments to state enterprise MOGE because it would clearly fall under the SAC, said Sifton.

“The whole game here is to keep the gas operations running but stop the money,” added Sifton, who said the companies had faced pressure from shareholders, civil society, the US and other government officials.