Chanel has appointed Leena Nair, a 30-year veteran of consumer goods group Unilever, as global chief executive, turning to an outsider to the luxury sector as it seeks to bounce back from the coronavirus-induced hit to profits.

The privately held company controlled by France’s billionaire Wertheimer family said on Tuesday that Nair, Unilever’s chief human resources officer for the past five years and a member of its executive committee, would assume the role at the end of January 2022.

She replaces Alain Wertheimer, who owns Chanel alongside his brother Gérard and took over the role from Maureen Chiquet when she left the label after “differences of opinion about strategic direction” in 2016. Wertheimer will take the role of global executive chair.

Nair and Wertheimer “will further ensure [Chanel’s] long-term success as a private company”, the luxury brand said in a statement.

Nair, who joined Unilever in 1992, was responsible for more than 150,000 employees across more than 100 countries as global head of HR. But she has little experience in luxury fashion, where marketing tactics differ greatly from mass-market products.

Alan Jope, chief executive of Unilever, said Nair had been a “pioneer” and a driving force on its equity, diversity and inclusion agenda.

Since it is not publicly traded, Chanel releases few financial figures, but in June its chief financial officer said it was on track to increase revenues by “double digits” this year compared with pre-pandemic levels of $12.3bn, with sales propelled by consumers in China and the US.

Alongside other big luxury groups such as LVMH and Hermes, Chanel has largely shrugged off the impact of the pandemic as the affluent continue to splash out. 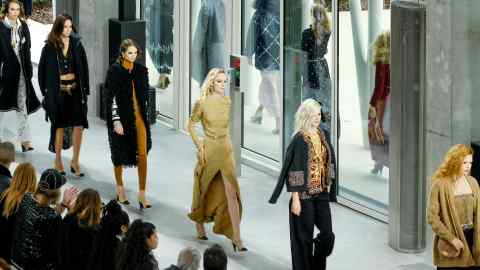 Its ready-to-wear sales have continued to climb under Virginie Viard, who became creative director in 2019 after the death of Karl Lagerfeld.

“Chanel has made the most of high desirability and has materially increased prices to beef up margins during the pandemic,” said Luca Solca, analyst at Bernstein. “It is important for Chanel to follow up with product innovation to sustain high desirability [in the] medium term.”

The spread of the Omicron variant of coronavirus could hurt sales across the sector, he added.

“Unilever and P&G stand tall as management reservoirs for the relatively young luxury goods industry,” Solca said. “The cases of Toni Belloni at LVMH and Fabrizio Freda at Estée Lauder are a benchmark in this respect.”

Get alerts on Chanel SAS when a new story is published