Summer style that serves an ace

How to get your tennis whites, greens and dayglo on this season

The attire of the tennis court has long held sway over fashion, from the crocodile-emblazoned cotton-piqué polo shirts popularised by Grand Slam champion René Lacoste to the ruffled white lawn dresses worn by the likes of Gertrude “Gussie” Moran and Lea Pericoli. Courtside style remains hotly coveted: the fashion search engine Lyst has reported a 35 per cent increase in searches for polo shirts year on year, and a 29 per cent increase in searches for tennis skirts.

There’s no shortage of tennis-inspired clothing this season. Bottega Veneta has done a contemporary take on the tennis dress featuring a drop waist and contrast-green stitching, while Lacoste has teamed up with APC to serve an ace collection of courtside staples and Bulgari has partnered with Casablanca to produce a capsule of white and grass-green leather accessories. Take 1980s-era Chris Evert or an old picture by Slim Aarons as your style cue. “We have seen a rise in demand for tennis-inspired fashion, with customers looking for that ’80s and ’90s country-club look,” says Net-a-Porter’s senior market editor Libby Page.

But while tennis style in part rests on the allure of its traditions, new brands such as Copenhagen-based menswear label Palmes Tennis Society, which launched last year, are helping to shake off the conventions. “I’d never really felt that tennis was for me,” says founder Nikolaj Hansson. “I think there’s this notion that tennis is slightly elitist and a bit upper class, and that’s because of how it’s always been portrayed.” Palmes Tennis Society is designed for performance as well as fashionability (Hansson is now an avid player). The panelled shorts comfortably fit three tennis balls in each pocket, and organic cotton sweatshirts, polos and vests are inspired in part by those once worn by Stefan Edberg and Boris Becker.

Palmes Tennis Society also posts editorial content on its website, such as guides on how to hold a racquet, and hosts informal tennis events in cities around the world to encourage more people to play and broaden the sport’s appeal. “That’s why we’re called Palmes Tennis Society, because we want to be open to anyone,” says Hansson. “The white clothes, the country club, the strawberries and cream – I love all those things, but they can be excluding. My purpose with this is to pass the joy of tennis on to more people.”

FT Globetrotter
The joy of tennis 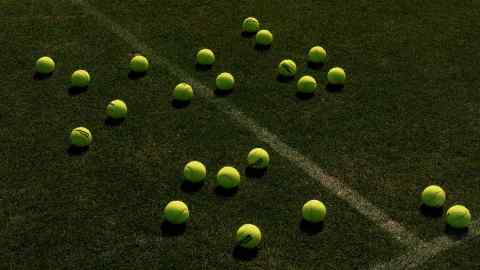