Where to get your culture fix, from the Maldives to Renaissance Rome

Skyspace in the Maldives

The Fari Islands is a novel concept for the Maldives: a micro-archipelago built on reclaimed reef, it currently has two resorts – Patina Maldives Fari Island and the Ritz-Carlton Fari Islands – along with a marina, a dining and retail “village” and a beach club, open to guests from other islands. From the beginning, the destination’s main creator, Evan Kwee, had art on his wishlist too. Specifically, one of James Turrell’s famed Skyspace pavilions, of which some 80 are scattered across the globe, from Houghton Hall in Norfolk to the coast of Uruguay. The Kwee-Turrell discussions apparently extended to considering a floating iteration, which the curious would have to dive down and swim into. In the end, Skyspace Amarta, which is Turrell’s only pavilion in the Indian Ocean, is land-bound, though not a whit less dazzling for it: a timber cube that greets guests as they dock at the marina, glowing pale violet in the evening, and framing fast-moving squares of equatorial atmosphere into ephemeral masterpieces. As for Patina itself? The Marcio Kogan-designed resort has to be among the coolest in the entire 1,192-island nation. patinahotels.com, from $2,181

Crete isn’t a place that will disappoint on the ancient-art front, home as it was to the Minoans, widely considered to be Europe’s first advanced culture. But fans of the contemporary can get their fix here too. Minos Beach Art Hotel, the pretty resort at Agios Nikolaos that’s a star member of the Design Hotels collection, is home to an open-air museum which showcases a significant part of the G&A Mamidakis Foundation’s family art collection. It houses works – large-format paintings, sculptures and installations along the wide, sand beach – by emerging and established names from Greece and abroad. And when they’re not doing art, they can do cuisine – the exceptional farm-to-table culinary programme here has earned the hotel a reputation as one of the best places to eat on the island. minosbeach.com, from €254

You might come to Cape Town for the Robben Island Museum, or the thrilling hike up Platteklip Gorge to the top of Table Mountain, or the beaches at Clifton. Similarly, you make for the Cape Winelands for the varietals and the scenery (which is like Napa spliced with New Zealand: breathtaking). Here are two effortless, and elegant, ways to introduce some of the most dynamic South African contemporary art into your days: stay at Ellerman House in town, and Delaire Graff Estate, near Stellenbosch, in the Winelands. The former is one of the more original integrations of fine art and hospitality I’ve seen, with important works dispersed throughout the public spaces and extensive grounds, and gathered in a gorgeous onsite gallery in which dedicated specialists offer private tours. The collection ranges from early 19th-century seascapes by Thomas Bowler through to portraits by the urbanist-musician Gerard Sekoto. At Delaire Graff, meanwhile, more than 400 works from Laurence Graff’s personal collection are on permanent view, and feature internationally renowned South African artists including Lionel Smit, Deborah Bell and William Kentridge. (Other highlights: the outrageously indulgent villas, each with their own pool, and a sunset supper on the terrace at Indochine.) ellermanhouse.co.za, from about £555. delaire.co.za, from about £900

Colour and light in Positano

The forever place that is Le Sirenuse in Positano owes much of its cachet to its heritage. Once the summer villa of the noble Neapolitan Sersale family, it still houses a stunning collection of 17th- and 18th-century antiques, paintings and prints. But since 2015, current owners Antonio Sersale and Carla Paravicini Sersale, in collaboration with the German curator Silka Rittson-Thomas, have invited a world-renowned contemporary artist to make a site-specific contribution, as part of the Artists at Le Sirenuse series. That neon scroll in the bar that reads “DON’T WORRY”? It’s by Martin Creed. Alex Israel contributed the enormous trompe-l’oeil mural depicting birds of paradise plants along the main stair. And the exuberant abstract canvas in one of the halls – Dancing The Jitterbug Waltz, by Stanley Whitney. Each commission manages to both provide a little electric bolt of surprise and live entirely intuitively in its chosen place amid all the history, perpetuating and evolving the sense of a (very chic) home. lesirenuse.it, from €703

…and your own private palazzo show in Rome

And if you find yourself in the Eternal City between now and Christmas, there’s an art-in-residence experience that is absolutely not to be missed. A new work by Los Angeles-based Sterling Ruby has been temporarily installed in part of the private apartments of the Galleria Doria Pamphilj, named for the noble family that amassed what is today one of Rome’s most important museum collections, spanning more than two millennia. In conjunction with Future Present, a selling exhibition of Ruby’s work at Gagosian (which is just a few blocks away), one of his Windows series of collages along with a sculpture will be on display in the spectacular Toletta di Venere. 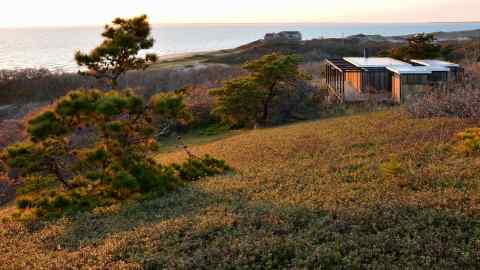 Alas, a stay here is highly improbable (the few apartments in the palazzo are all long-term lets) but the grand suites of the Residenza Napoleone, just down the Via del Corso, will bring the same pleasures. Alternatively, privacy seekers with very deep pockets can take over the magnificent Palazzo Odescalchi. Sterling Ruby, until 19 December; residenzanapoleone.com, from €900. Palazzo Odescalchi, price available on request from uniquepropertiesandevents.com