Nicole Perlroth’s sobering investigation into the cyber weapons arms race, This Is How They Tell Me the World Ends, has been named Financial Times and McKinsey Business Book of the Year for 2021.

The judges lauded Perlroth’s unprecedented in-depth analysis, which they said had opened their eyes to the potential for a cyber catastrophe.

Roula Khalaf, FT editor and chair of judges, said: “Cyber security isn’t featuring highly enough on CEOs’ agenda. I hope this award will prompt them to read this book and pay attention.”

In her prologue to the book, published by Bloomsbury, Perlroth hopes it will shine “a glimmer of light on the highly secretive and largely invisible cyber weapons industry so that we . . . may have some of the necessary conversations now, before it is too late”.

The £30,000 award, first presented in 2005, goes to the book that presents “the most compelling and enjoyable insight” into business issues.

Magnus Tyreman, McKinsey’s managing partner Europe, who presented Perlroth with the award at a ceremony in London, said it was “an alarming book” that “makes a compelling, granular and matter-of-fact case for how vulnerable global computer systems have become, even as it also comes with an urgent plea for specific and systematic action”. 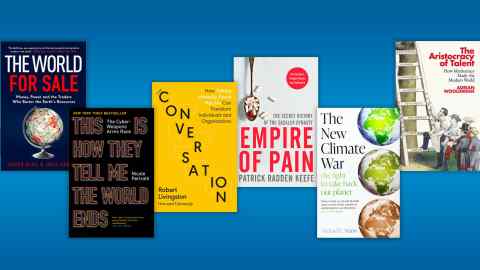 At the same ceremony, academics Ines Lee and Eileen Tipoe received the £15,000 Bracken Bower Prize for the best business book proposal by authors aged under 35 for Failing the Class, about the future of higher education.

Tony Danker, director-general of the CBI, the UK business association, was the guest speaker.

The authors of five other shortlisted books received £10,000. The other finalists were: The World for Sale, by Javier Blas and Jack Farchy, about the commodities boom; Empire of Pain, by Patrick Radden Keefe, on Purdue Pharma, the Sackler family, and the opioid epidemic; The Conversation, by Robert Livingston, about race and racism at work and in society; The New Climate War, by Michael E Mann, about how to tackle climate change; and The Aristocracy of Talent, by Adrian Wooldridge, on the backlash against meritocracy.

Last year’s winner was Sarah Frier for No Filter, her analysis of the growth of social media company Instagram and its takeover by Facebook.