Patron power at House of Today

Cherine Magrabi is a regular visitor to art and design fairs, but at Design Miami next week, she will not be attending in her usual role. The seasoned collector of contemporary art and design will instead be looking after her own booth at the fair. She set up the non-profit organisation House of Today in 2012 to give exposure to Lebanese designers, and ran month-long events in Beirut in 2012, 2014 and 2016 under the same heading.

But this appearance, in the Curio section at Design Miami, where more relaxed rules allow exhibitors to show less fair-appropriate pieces, from industrially produced works to those not-for-sale, will be its first international outing. Be sure, however, that Magrabi’s offerings are there for purchase.

Magrabi describes House of Today as “a hub to educate and advise designers, and give them a public selling platform”. Profits from sales and introductions go back into the project, to provide grants for young Lebanese to study both locally, at the Académie Libanaise des Beaux-Arts (Alba) in Beirut, as well as further afield in colleges such as Rhode Island School of Design and the Royal Academy of Fine Arts in Antwerp; and to offer mentorship to those who have already set up businesses in Beirut. Most important, House of Today offers Magrabi herself, a well-connected matchmaker adept at building relationships between designers and producers as well as clients.

Magrabi was born in Jeddah to a Saudi-Egyptian father and Lebanese mother and was schooled in Saudi Arabia and Switzerland. She speaks Arabic, French and English and has houses in London, Beirut and Paris. As a collector, she knows about commissioning design. In her Beirut home, in the city’s swanky Solidere district, there is a bespoke laminate and metal dining table by the London-based Martino Gamper, which can be divided into four parts. “We often have people over to eat. The flexibility of this table represents the different ways in which we entertain,” she says.

For her Paris apartment near the Étoile, she recently invited the Lebanese designer Najla El Zein to create an altogether different piece: a dining table to seat 10 with a wooden top that gradually furls up into a sail. “It’s inspired by a woman’s body,” says Magrabi. “It’s important to me to have something Lebanese in Paris, to show the world what we can do.”

These one-off works are matched with art by Alex Katz, Richard Prince and Keith Haring, and 20th-century design classics, including pieces by Gio Ponti, Jean Royère and Mathieu Matégot.

While Magrabi’s collecting is spontaneous and intuitive, her work in design is more pragmatic. She studied interior architecture at the Chelsea campus of University of the Arts London and the Inchbald School of Design, though says she was too shy to make much of it. (She still speaks so quietly that at times I can hardly hear her above the insistent music playing in the London café where we meet.) But since 2012, she has been the creative director of her family’s eyewear business — Magrabi — which now has 200 stores in the Middle East. “There were only 100 stores when I started,” she says. “I found I really enjoyed the challenge, and everything began to make sense.”

The previous generation of Beirutis were very affected by the war. This generation want to move on

It was partly the eyewear business that brought her into contact with young designers in Beirut, where she and her husband, the asset manager Ahmed Tayeb, went to live in 2002. When the young duo David Raffoul and Nicolas Moussallem asked her if they could try their hands at optical design, she had them design a cabinet for her instead. (It has since been produced as a limited edition by Carpenters Workshop Gallery.)

Magrabi first commissioned store windows from the designer Rami Dalle, before inviting him to join House of Today. (Dalle went on to design windows for Hermès in Beirut and Paris.) He is one of three designers to be represented in Miami, with a wall of concrete plates embellished with marquetry, crochet and fragments of glass. “Lebanon is known for blown glass, and I like these oblique references to the place of origin,” says Magrabi.

Alongside Dalle, there will be designs from the husband-and-wife team Stephanie Sayar and Charbel Garibeh, and from Khaled El Mays, a 32-year-old who studied digital art at Pratt Institute in New York before returning to Beirut to work in product design.

For Magrabi, they represent a new generation of Beirutis. “The previous generation were very affected by the war, and it came out in their work. There’d be bullets or bullet holes somewhere, or a chair like a coffin,” she says. “This generation want to move on, they have a different vocabulary, with humour and a certain naïveté.”

She asked the designers to work with non-precious materials. Sayar and Garibeh cast liquid foam to create the base of a bedside table titled “Mom”: a portrait of Garibeh’s mother encircled with large beads, like a pearl necklace. El Mays worked with wicker, which is his favourite material, to create a new lamp and a nightstand. “They are romantic pieces,” says El Mays, “very delicate in conception and making, and with the 1960s in mind.”

The Curio section of the fair was introduced three years ago to bring in some unexpected voices, including those who might not yet be mature enough to compete with the more established galleries that take part. “Whether the work is really exciting, or makes you scratch your head, it’s good to have a change of pace and perspective,” says Design Miami’s director Rodman Primack. Beirut’s young designers promise to offer all the above. 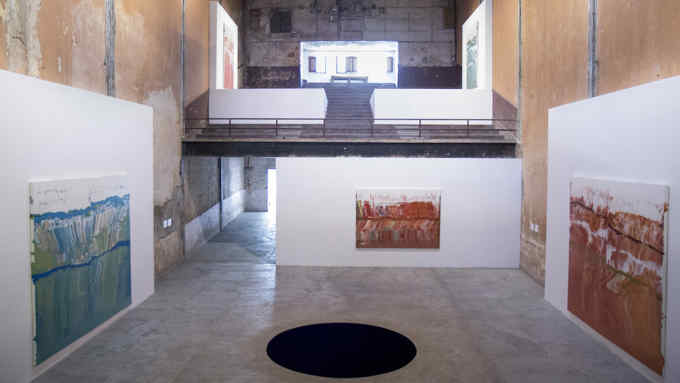