We’ll send you a myFT Daily Digest email rounding up the latest Restaurants news every morning.

How To Spend It Restaurants

The boy wonder of French cooking

Meet Mory Sacko, who has dazzled Paris and beyond with his “Franco-African-Japanese” cuisine

We’ll send you a myFT Daily Digest email rounding up the latest Restaurants news every morning.

“We had to start all over again,” says the French chef Mory Sacko, referring to how a sudden six-month lockdown that began in October 2020 forced him to close the doors of his Parisian restaurant MoSuke after it had been open for only eight weeks. “The difference,” says the 29-year-old with a broad smile, “was that when we reopened in June 2021 we had won a Michelin star.”

MoSuke is now one of the toughest reservations in town, which is why it was exciting when I snagged a table for two one evening in Paris. Sacko, who is very tall (6ft 5in), with dreadlocks neatly tied back with a black leather cord, looked across the counter of his open kitchen and greeted me with “Bienvenue!” And welcome was exactly what I felt at this restaurant whose young staff are proud to work for a chef whose highly original menu and relaxed hospitality have become a culinary sensation.

“MoSuke is an amalgam of chef Mory Sacko’s first name and that of Yasuke, an emancipated Mozambican slave who was the first and only black samurai in Japan during the 16th century,” I overheard a waitress explain animatedly to the table next to mine. “But Monsieur Sacko’s parents are from Mali, not Mozambique. He chose this name because he loves Japan and Japanese food and cooking. He always says he’s French by birth, because he was born in France; African by ancestry from his parents; and Japanese by affinity, especially in the kitchen,” she continued. And then she took their order.

Many of those arriving for dinner that evening appeared to already know Sacko from le petit écran. He was a popular contestant during a recent season of the hit cooking show Top Chef, and has more than 215,000 Instagram followers, his preferred method of social-media communication.

Despite being unable to take full advantage of the surge in business that ordinarily occurs when a restaurant wins its first Michelin star, Sacko has nonetheless found himself unusually busy. In February, he debuted as the host of Cuisine Ouverte (“Open Kitchen”), where he visits a different region every week, discovers its signature produce, and then cooks it alongside a famous chef. One episode, for example, found him cooking alongside Emmanuel Renaut of Flocons de Sel in Megève, the ski resort in the Haute-Savoie which has been awarded three Michelin stars. The show was a huge hit, drawing more than 1.6m viewers.

When we meet a few days later, Sacko talks about the sociological shifts that are happening in France now – to the culture and to the cooking. “Some may have been shocked to see a black man in the role of an exemplar of Gallic gastronomy, but for most younger French people, we’re kind of past that right now,” Sacko says. “When I was growing up in Seine-et-Marne [a département just east of Paris], my friends were white, Asian, black, Arab and other – from France but also other countries, Christian but also many other religions. So diversity is our reality in a way that it might not be for older people.”

Sacko is proud of his heritage and the road on which he’s travelled. “It’s not often a kid from the suburbs wins a Michelin star. As a Parisian, you know that for so many young people in the suburbs the elegant city of Paris is as a distant as the moon,” says the cook, who grew up eating African dishes such as chicken yassa (with lemon and onions), and mafé (beef stew in peanut sauce) with his eight siblings. “My mother’s a great cook and we always ate really well at home,” he says, “but I knew almost nothing about French cooking because I didn’t have a Gallic granny making blanquette de veau for me on Sundays. The only cooking I knew outside of the house was American fast food, our special treat.”

A school-leaver at 14, Sacko first went to hotel college after catching glimpses of the glamour at Paris’s grand establishments while watching television. But it was only when he started working alongside chef Hans Zahner at the Royal Monceau that he was drawn to the possibilities of a career in food. “I love the techniques of cooking, and also the poetry of creating taste,” he says. He found a mentor while working as a sous-chef for Thierry Marx at the two-Michelin-star restaurant Sur Mesure at the Mandarin Oriental. Marx (a Frenchman of Polish Jewish origins from the old Paris working-class district of Belleville and an ardent Japanophile) and Sacko bonded over their love of Japanese and French gastronomy.

“Thierry shared his love of Japan, its culture and its cooking with me, and I fell in love with a faraway country I’d never really seen before,” says Sacko. “The rigour, elegance and honesty of Japanese cooking immediately made sense to me. Building umami is often the goal of both Japanese and African cooking so there was a culinary logic I immediately understood. I felt at home with the palate. This is what led to my cooking style, which is Franco-African-Japanese – a reflection of my culinary journey.”

This summer, Sacko opened a street-food pop-up called Edo in Lyon and Marseille, offering a taste of his cooking, street-style (with menus affordably priced from €21 and €29). “We served Afro-Japanese street food, which was really well received in two French cities with very different gastronomic cultures,” Sacko says. A London version of the same pop-up is planned later this year, subject to finding a suitable location.

The French pop-ups have been invaluable in helping Sacko understand how French gastronomy has been changed by Covid-19. “The French food chain was already evolving a lot before the pandemic, but the three lockdowns accelerated this,” he says. “I think that being deprived of restaurants made everyone finally understand just how important they’ve become to daily life in the world’s biggest cities. Whatever nightlife there is these days has mostly migrated to restaurants, which are where people not only go to eat but have a good time. This is why there’s been a major move away from formality in Paris towards more relaxed and fun places. I think this will continue too.” 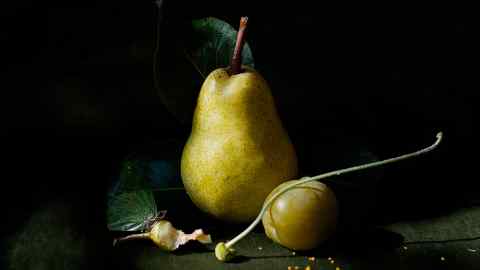 Back at my table at MoSuke, my friend had arrived and I could start my own exploration of Franco-African-Japanese cooking. It began with a superb starter of roasted lobster with lacto-fermented peppers, miso and tomato, a nonchalantly elegant dish in which the miso’s umami enlivened the sweetness of the crustacean and the peppers added some teasing punctuation. We also loved Sacko’s sole cooked in a banana leaf with shichimi togarashi (a Japanese mix of seven spices) and its garnish of attiéké, a dish of fermented cassava pulp popular in the Ivory Coast, and a brilliant dessert of marinated pineapple with bissap (hibiscus juice) sorbet and candied shiso leaves. The food at this fine-dining destination was unlike anything else I’d eaten in more than 30 years of living in Paris. The menus are designed seasonally and offered as three, four, five and seven courses, priced from €55 to €110, and the crowd is diverse, the restaurant attracting young and old – all interested in new gastronomy.

I spot Sacko, pausing to survey the busy dining room. “When we go out we’re as hungry for conviviality as we are for good food,” he says, above the room’s ambient, friendly clatter. “What we want to eat now is healthy, environmentally sustainable food that tells a story that is honest, original and exciting. This is what I’ve tried to create at MoSuke,” he tells me. He’s certainly succeeded.

Get alerts on Restaurants when a new story is published