My childhood memories are gilded with recollections of visits to Hartlepool’s grand Victorian central library — the warm sheen of the polished brass push plates on the doors, the comforting smell of books and the hushed air of reverence broken only by the gentle thud of a library stamp. Shhh!

It was the first place I was allowed to go on my own. By around the age of 11, when I’d sated myself on The Famous Five, Swallows and Amazons and Jennings, I crossed the corridor and timidly entered the holy of holies — the adult library.

And then I grew up. Books became more affordable, the library less enticing. Libraries changed too. They haven’t only been starved of resources in the past 40 years, their remit has evolved. They are now “community information hubs” — books can sometimes seem peripheral.

And that might explain why private libraries — keepers of the old tradition — are enjoying a revival. The origins of “independent” libraries, as they are now known, date back to the mid-18th century when even the upper middle classes found books and newspapers expensive and decided to pool resources.

One of the grandest, The Portico in Manchester, was opened in 1806. It was funded by 400 of the city’s wealthiest men, who each gave around 30 guineas for a share (the equivalent of 18 months’ wages for a framework knitter) followed by a smaller annual subscription. 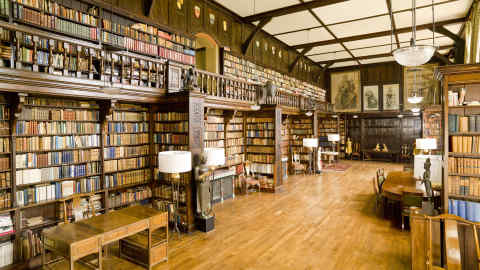 Emma Marigliano, chair of the Independent Libraries Association, says those that still survived by the turn of the millennium often felt like decaying gentlemen’s clubs. “They were stuffy and unsustainable. Most are in historic buildings. That’s a big part of their appeal, but subscriptions couldn’t meet all the maintenance costs. Without public money they faced closure.

“That forced them to be more open and accessible and by opening themselves up, many have really thrived. They’ve created strong, intellectual communities — they’re holding talks, events and encouraging a much more diverse membership.”

My own library in Nottingham, Bromley House, was created in 1816 and is in a gorgeous Grade II* listed Georgian townhouse. It has just won a much-needed £386,000 grant from English Heritage to replace the 267-year-old roof. Its 50,000 books include some rare Victorian treasures, but around a thousand new books are purchased each year.

Membership — which has more than doubled in the past decade to nearly 1,700 — costs just £104 annually per household. That’s about what I’ve saved buying books, but there are other benefits. The knowledgeable staff have enthusiastically introduced me to new authors; I’ve stumbled upon surprises I would never have bought. And then there is the fact that in a cacophonous world, it offers some precious calm.

A recent Arts Council project with the artist Kate Genever sought to discover the appeal of Bromley House (and, by extension, other independent libraries). Head librarian Melanie Duffill-Jeffs says: “Several common threads emerged, like a love of books, heritage and tradition. But there was also a sense that this is a safe place, a place of refuge from the outside world.”

One person said: “Bromley House was like a plaster when my anxiety threatened to break me.”

Ms Duffill-Jeffs says the age profile of the membership is like an inverse bell curve. “We have a peak at around 21, and again at post-retirement age. Young members, who have a discounted subscription, find it quieter than their university library and it’s a good place to show off on Instagram. Older members join for the club-like atmosphere, the talks and the various groups. They’re big readers and appreciate that we’ll generally respond to their requests for new books.”

The jewel in the crown of Independent Libraries is the London Library in St James’s Square (membership costs about £500 a year). It is breathtaking in its scope — 17 miles of shelving and around 1m books. But around the country there are dozens of other gems — whether it is Newcastle’s stunning Lit & Phil, the Devon & Exeter Institution or the country’s oldest surviving subscription library, The Leeds Library, which celebrated its 250th anniversary last year.

Check out your nearest by visiting the Independent Libraries Association website, but if you do unearth a local treasure, don’t tell too many people — they’ll all want to join.