US stocks pulled back from the biggest daily rise in almost nine months as concerns around inflated valuations began to weigh on investor confidence.

The S&P 500 closed down 0.8 per cent, a day after the blue-chip index’s best performance since June. The tech-focused Nasdaq Composite dropped 1.7 per cent, falling back from a 3 per cent rally on Monday.

“The markets seem to be vacillating between optimism and pessimism, which is not unusual given that there are so many variables out there,” said Grant Bowers, a portfolio manager at Franklin Templeton.

While positive vaccine news and Washington’s $1.9tn stimulus package coming within reach are strong signals for a swift economic recovery, concerns over frothy stock levels have risen among traders and policymakers.

“We have been reducing our exposure to specific names that were trading on very high valuations, typically within the Nasdaq,” said Kevin Thozet, a member of the investment committee at the French investor Carmignac.

Some of Wall Street’s high-flyers led the decline on Tuesday, with the electric car maker Tesla sliding 4.5 per cent Shares in the streaming tech provider Roku tumbled 7.3 per cent, and the video conferencing platform Zoom was down 9 per cent by the time the closing bell rang.

The fall in US equities followed a tough session in Asia after China’s banking regulator also voiced concern over high valuations in foreign markets. Hong Kong’s benchmark Hang Seng index closed down 1.2 per cent, while China’s CSI 300 index of Shanghai and Shenzhen-listed stocks shed 1.3 per cent.

“I’m worried the bubble problem in foreign financial markets will one day pop,” Guo Shuqing, chairman of the China Banking and Insurance Regulatory Commission, told local media at a briefing in Beijing. He pointed to gains in US and European markets enabled by ultra-loose monetary policy, which he said had “seriously diverged” from the real economy.

“China’s market is now highly linked to foreign markets and foreign capital continues to flow in,” Guo said, according to China’s state-backed Securities Times, in a nod to global investors’ appetite for Chinese stocks and bonds. He added that while China could handle the scale and speed of inflows, “we must prevent volatility in [China’s] domestic financial market from becoming too great”. 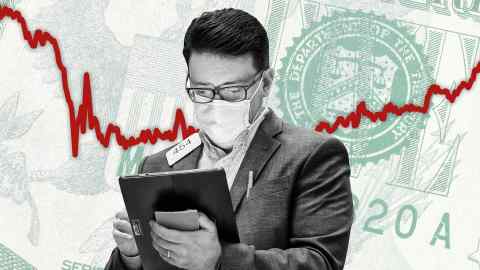 In Europe, the region-wide Stoxx 600 closed up 0.2 per cent, building on the benchmark’s best performance in four months on Monday. London’s FTSE 100 index rose 0.4 per cent while Frankfurt’s Xetra Dax climbed 0.2 per cent.

The continent’s bonds steadied after more than a week of turbulent trading in debt markets. The yield on Germany’s 10-year Bund edged up 0.01 percentage points to minus 0.35 per cent, having fallen 0.07 percentage points a day earlier.

But unease around the relationship between loose monetary policy and the performance of the markets remains a concern in Europe.

“Last year the narrative that was driving markets was easy monetary policy and fiscal support,” said Thozet. “The question is how long will this last? Central bankers are saying that they will keep loose monetary policy, but what we’re seeing, particularly in the EU, is they’re not using all the tools at their disposal.”

According to data released on Monday, the European Central Bank bought €12bn of bonds under its pandemic emergency purchase programme in the week to Wednesday last week, which was down from €17.3bn the preceding week and below the €18.1bn weekly average since the programme began in March last year.