Moses Magwaza
Head sommelier at Pretoria’s Restaurant Mosaic at The Orient – current holder of two of The World of Fine Wine’s wine-list awards – Magwaza will be spending Christmas with his family in Mpumalanga for the first time in 15 years. And he’ll be drinking local all the way. “It’s very hot, so while I’m cooking I will be keeping cool with a glass of Graham Beck Cuvée Clive Brut. With the lamb chops we’ll have a beautiful Bordeaux blend from Paarl’s Vilafonté Series C.” He’ll also be making time to enjoy either a Chardonnay or Pinot Noir from “rising star” Crystallum. Graham Beck Cuvée Clive Brut 2015, about £38, shop.grahambeck.com. Vilafonté Series C 2017, £58.99, sahouseofwine.co.uk. Crystallum, from £22.49, sahouseofwine.co.uk

Victoria James
The sommelier-author of this year’s award-winning exposé Wine Girl (Little, Brown) plans to be at her country house in Connecticut with her extended family, “roasting chestnuts on the fire and drinking fresh winter reds from Tuscany”. For a selection of Stella di Campalto reds, bbr.com

Søren Ledet
In Denmark, the wine director and co-owner of Copenhagen’s three-Michelin-star restaurant Geranium will mark Christmas Eve with a traditional feast of roast duck, pickled red cabbage, prunes, apples and redcurrant jelly, paired with a bottle of 2007 Rayas Châteauneuf-du-Pape. “I’ll probably drink some other wines too,” he says, “but it won’t really matter what, as long as I enjoy them with people I love.” 2007 Rayas Châteauneuf-du-Pape, £720, brunswickfinewines.com

Ronan Sayburn
67 Pall Mall’s head of wine likes to do it by the book, starting with a glass of champagne on Christmas morning – “Pierre Péters or Vilmart & Cie” – and then salmon or oysters “with a young village Chablis”. Turkey will be served with “a good Pinot, probably The Eyrie Vineyards from Oregon and/or a Morgon from Beaujolais’s Jean Foillard; Christmas pudding with a madeira from Pereira d’Oliveira”. Champagne Pierre Péters, from £44, bbr.com. Vilmart & Cie Grande Reserve Brut, £35, thechampagnecompany.com. The Eyrie Vineyards 2015 Pinot Noir, £300 for 12, justerinis.com. Jean Foillard “Côte du Py” Morgon 2016, £75 for a magnum, thesolentcellar.co.uk. Pereira d’Oliveira 1977 Sercial Madeira, £165, thewhiskyexchange.com

Mark Andrew
Present-opening for Mark Andrew – co-owner of the Noble Rot restaurants and co-author of Wine From Another Galaxy (Quadrille) – is usually accompanied by a thirst-quenching Riesling: “this year it will be a Riesling Kabinett Trocken ‘Palmberg’ from the biodynamic estate Stein in the Mosel Valley”. They’ll also uncork some Château d’Yquem to go with the Roquefort – “which might sound flash but is well-deserved after being a restaurateur in 2020!”. Riesling Kabinett Trocken “Palmberg”, part of a mixed case of six, £235, keelingandrew.co.uk. Château d’Yquem Sauternes 2005, £400, harveynichols.com

Luca Dusi
The owner of east London vinoteca Passione Vino has a heavy schedule planned for Christmas. “I am from Verona in the north of Italy – where they celebrate Christmas Day – and my lovely wife is from the south, where they celebrate Christmas Eve,” he says, “so in order to maintain peace we start celebrating at 3pm on the 24th and carry on all the way through to that last shot of Fernet at 8pm on Christmas Day.”

Christmas Eve “is all about fish”, he says, paired with light reds “to enjoy a little chilled: ‘Velluto’ Valpolicella Classico DOC, Meroni”. Christmas Day, by contrast, is about meat and pasta, allowing him to indulge his love of Nebbiolo with an Elio Sandri Langhe Nebbiolo 2017.

How To Spend It
My year in mixology

Rajat Parr
The super-som and winemaker/owner of Domaine de la Côte and Sandhi, Parr likes to kick off Christmas Day with a walk on the beach near his place in Cambria, California, followed by a plunge in the freezing Pacific. Afterwards it’s back to his with friends for ‘‘lots of champagne” – traditionally either Jacques Selosse or Jérôme Prévost. Then a guinea hen and Cornas.” Jacques Selosse Initial, £164, hedonism.co.uk. Jérôme Prévost La Closerie Les Beguines, $165, rarewineco.com. Cornas wines, from £42.28, bbr.com

Vinodhan Veloo
Christmas for the head sommelier at Cloudstreet, Singapore, is a time more often spent with friends than family: “It is not a festival that my family necessarily celebrates as they are Hindus – but I always spend it in the company of my buddies.” This year, on account of social distancing, he’ll be spending it with his fiancée, a bottle of JB Becker Riesling Walkenberg Spätlese Trocken and a plate of their favourite cheese. 2015 JB Becker Riesling Walkenberg Spätlese Trocken, $74.95 for a magnum, crushwineco.com

Michael Sager
Spirits are on the menu for the owner of east London’s Sager + Wilde. “My absolute favourite celebratory drink is grower champagne with a glass of sipping mezcal on the side,” he says. He suggests a glass of fizz from grower Timothée Stroebel paired with the Tobala Mezcal by Berta Vasquez. Tryptique NV Champagne, £69, littlewine.co. El Destilado Tobala Mezcal, £38.95, thewhiskyexchange.com

Raj Vaidya
Perhaps the most fun of all will be had by the former wine director of Daniel Boulud’s restaurant group: “My Christmas plans as a New Yorker without any local family have long been the adopted tradition of the city’s Jewish population – an early BYO dinner at a Chinese restaurant followed by a movie. Seems this year it might involve eating crab at the sidewalk café of Wu’s Wonton King in Chinatown, paired with a host of grower champagnes, including Jacques Selosse Initial [see Rajat Parr], Pierre Péters Les Montjolys and Jérôme Prévost La Closerie Les Beguines [also see Rajat Parr].” Vaidya may have to swap the cinema for Netflix this year, but no matter. It will still be, in his words, “a proper celebration!”. Pierre Péters “Les Montjolys” Blanc de Blancs Grand Cru 2012, $299.97, artisanwinedepot.com 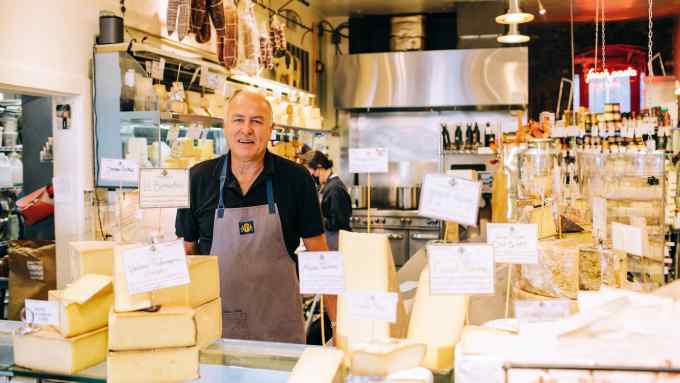