The new networking for a hybrid era

Big real-life gatherings can seem daunting, and many people are rethinking how to re-establish professional connections

The past two years have reinforced to Matt Ballantine, head of technology and transformation for RHP, a housing association, that his favourite part of a conference is addressing delegates from the stage on the topic of technology and the future of work.

“I don’t like big groups of people. I enjoy it when I talk to people, but being able to speak at an event is about having control over the situation and then at the end of it hoping people will approach me. The irony is that nobody does. My wife really struggles with the idea that I’m anything other than an extrovert,” he says.

After months of social isolation, he is trying to be bolder. “It’s made me more aware of the fears I had before. I am more appreciative of the time I spend with people. Social events that happened in the past six months have felt much richer. If I’m going to make the effort to travel I need to make more of it, be a bit less of a wet blanket.”

As social restrictions ease and employees return to the office at least part of the time, formal work events have started to reappear, spurring a heady mix of dread and excitement about the professional networking that surrounds panel discussions and conferences.

Many of us, after two years of on-off lockdowns and a social life that has sometimes focused on park benches, are out of practice at making small talk. One woman speaks of being so used to Zoom meetings, she assumed her face-to-face encounter was going to be online and automatically sent a videoconference link instead of arranging a venue to meet. Another says she drinks too quickly at networking events, due to nerves and feels giddy after months of lockdown sobriety.

Professional networking
Are you in on the secret? Why alumni networks are flourishing 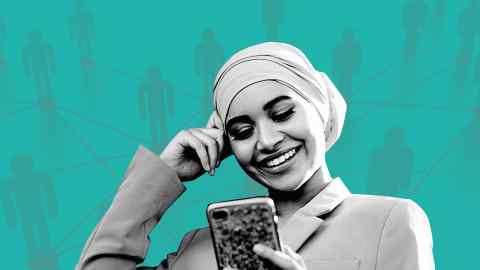 Vaishnavi Sharma and Sonam Sikka, co-chairs of the Deloitte Hindu Network, organised a Holi celebration for the group’s first in-person event. “When we were planning, we weren’t sure if people would come in due to hybrid [working],” says Sharma. “We planned it for 80 people but we got about 120.” Most of the questions in advance were not about lateral flow tests but dress code. “There were a lot of people who joined in lockdown and hadn’t had face-to-face events,” she says.

Steve Nobes, head of partnerships at Tembo, a mortgage broker, says of his initial real-life encounters: “You’re so used to a Zoom introduction and straight into it, you almost forget to have the preamble and the small talk. There was a bit of hesitancy to mix and speak to people.”

Networking already had a dubious reputation before the pandemic. In the 2014 paper “The Contaminating Effects of Building Instrumental Ties: How Networking Can Make Us Feel Dirty”, published in a Cornell University journal, researchers found that “unlike personal networking in pursuit of friendship or emotional support [or] social ties that emerge spontaneously, instrumental networking in pursuit of professional goals can . . . make [an individual] feel dirty”. This sort of unease is exacerbated by the asymmetry in workplace relationships that means those least likely to network are those who could benefit most.

So, what is the best way to restart our formal workplace lives and get used to talking to strangers again? And should we take this time of re-entry as an opportunity to rethink everything about the practice of networking? Dorie Clark, author of The Long Game: How to Be a Long-Term Thinker in a Short-Term World, says that the idea of networking as transactional “would make anyone feel dirty” and is in need of reframing, so that potential networkers see the possibilities for finding workplace companionship or collaboration.

Professionals might need to ease themselves back in gently. “Like any muscle, it’s a bad idea to overexert ourselves early in the game,” says Clark. “You need to build your capacity back up; for many of us it can feel awkward and overstimulating. So pace yourself and choose to go to fewer events as you work your way back into practice.”

You’re so used to a Zoom introduction and straight into it, you almost forget to have the preamble and the small talk

One literary agent says that in preparation for the London Book Fair, she had to strategise. “I really enjoy seeing people in person again, after all, it’s very much a relationships business, but I do find, especially after the last two years of the pandemic, that I get quite wired and overexcited when I go to events so that it can be hard to unwind.” So she avoided packing too much in the diary, and created moments of peace and calm.

Julia Hobsbawm, author of The Nowhere Office, says reimmersion is difficult. “People are out of practice, their latent shyness is getting more pronounced.”

The pandemic has given people an opportunity to reappraise their work patterns and for some, like Clark, it has emboldened them to eschew big social gatherings. “Large events happen because extroverts like them and they plan events for themselves. It is enormously hard and stressful unless you are inherently motivated to talk to strangers, plunge in with no context and go up to people you don’t know and attempt to find common ground when none might exist.”

Pre-pandemic networking was restricted to large conferences, but in a hybrid environment the very act of going to the office or meeting one-to-ones or in small groups can be considered networking. “Employers should think about creating a chief networks officer — someone who is tasked with how people network with each other,” says Hobsbawm. “Really the office is going to be good for two things — social networks and learning. Because people have been out of the office, the last thing you want them to do is to send them to a conference.”

There might be aspects of pandemic life that are worth keeping, such as Zoom sessions with peers across the globe. For some, notably parents of young children, the pandemic has created virtual networking opportunities — or at least prevented them from missing out on any traditional post-work drinks because they have to get home.

Anthony Painter, director of policy at the UK’s Chartered Management Institute, points out that hybrid work patterns have made the issue of networking more complicated. “Everybody is feeling their way back into some of the activities that are part of their working practice. There’s a concern that particular groups with responsibilities will be left out. What’s yet to emerge is a pattern of how we’re behaving in this new world. It’s a really complex thing as to how individuals can be excluded, from chance encounters, or stretch projects. We are all still learning and have to keep a close eye on it.”