Brands benefit from jumping on the plastic ban bandwagon

For many, the shocking footage of albatrosses feeding ocean-blown plastic to their chicks, in the BBC’s Blue Planet II television series, marked the moment last year when simmering concerns over plastics pollution boiled over.

As consumers threatened boycotts, retailers and fast-moving consumer goods brands scrambled to occupy the high ground. In January, the UK supermarket chain Iceland pledged to go plastic-free on its own-label range, and Pret A Manger doubled its discount for customers bringing re-usable cups to 50p.

By April the bandwagon was rolling. Over 40 companies — including Tesco, Lidl, Marks and Spencer, Waitrose, J Sainsbury, Unilever, Procter & Gamble and Coca-Cola — signed the UK Plastics Pact to ditch unnecessary and problematic single-use packaging by 2025.

Since then, Swedish multinational furniture retailer Ikea has promised to remove single-use plastic globally from its products and its restaurants by 2020. But will the rising tide of pledges help the planet — and the fortunes of companies making such commitments?

While brands rightly fear being labelled as environmentally unfriendly, there are potential downsides to kicking a plastics addiction. According to consumer research company Kantar TNS, people still make choices based on quality and price at the checkout even though packaging has now overtaken wages for developing country producers and carbon footprint among UK shoppers’ top concerns.

“While there are good intentions . . . there’s a job of educating to be done because right now consumers haven’t crystallised the problem beyond ‘plastic is the enemy,’” says Eve Dixon, UK managing director of consumer, retail and lifestyle at Kantar TNS.

FT Magazine
The problem with plastic: can our oceans survive? 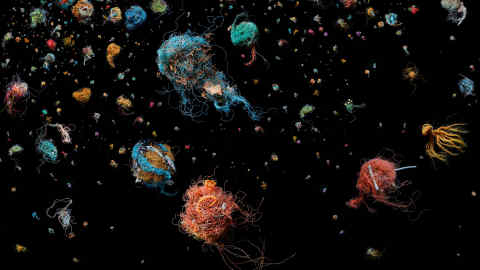 Using their brands to nudge consumers towards better habits may earn businesses, some brownie points from green campaigners who have criticised them in the past.

As part of its 2030 sustainability goals, P&G is looking for ways to stop its packaging ending up in the oceans. Virginie Helias, vice-president of global sustainability, says this involves efforts to curb pollution and collaborations to address the inadequacy of waste management infrastructure in large parts of the world.

While public concern about plastic pollution has been high in Europe, much of the waste enters the oceans in developing countries.

In Europe, P&G has made a point of using its brands to engage consumers with its environmental goals. For example, in 2017, it ran a campaign in France to turn beach plastic litter, collected by volunteers, into Head & Shoulders shampoo bottles. The campaign — which is now being extended internationally — supported a commitment that by the end of 2018, 90 per cent of P&G shampoo bottles sold in Europe will contain 25 per cent recycled plastic.

This had some benefits for the Head & Shoulders brand. According to Ms Helias, shoppers at the supermarket chain Carrefour, where the bottles launched, told researchers that they viewed the brand more positively.

There is a risk, however, that some consumers will become disenchanted if brands do not do enough. Like other signatories to the UK Plastics Pact, P&G aims to make plastics greener through a combination of recycling, re-use and composting, rather than switching to other materials. For some, this falls recklessly short of the radicalism needed to stem the build-up of littered waste, which could see more plastic by weight than fish in the ocean by 2050.

Observing that a mere 14 per cent of plastic packaging globally is collected for recycling, Louise Edge, ocean plastic campaigner at Greenpeace, urges companies to commit to yearly use reductions. “Given the amount of plastics coming on stream, it’s clear that recycling won’t fix the problem.”

In promising to make all its own-brand products plastic-free by 2023, the supermarket chain Iceland has earned praise for its boldness. “We’re doing the right thing, but we’ve some massive challenges,” says Ian Schofield who manages Iceland’s own-label products and packaging. Switching to alternative packaging will require Iceland and its suppliers to invest in new machinery, adding costs that it has promised not to pass on to consumers, and it has yet to find replacements for some plastics films.

Ditching plastic, or switching to alternatives, also runs the risk of worsening other ills such as food spoilage and carbon emissions associated with climate change. Sander Defruyt, who leads an initiative on plastics at the Ellen MacArthur Foundation, warns that while replacing plastics sometimes makes sense, “it’s not a blanket solution”.

As science advances, the environmental trade-offs inherent in manufacturing choices are becoming more apparent. This raises awkward questions over how to respond when emerging evidence casts doubt on processes and products previously considered environmentally sustainable. For brands that claim to be environmentally friendly the stakes are especially high. “They will rightfully be scrutinised to a much greater degree,” says Chris Moody, chief global design officer at the consultants Wolff Olins.

The outdoor-wear business Patagonia faces this dilemma. It built its identity on environmental activism and led with the use of recycled plastic bottles in fleeces. Now it — along with other apparel makers — is challenged by evidence that tiny synthetic fibres, shed in the wash, are polluting the oceans and entering the food chain.

Matt Dwyer, senior director of materials innovation at Patagonia, says the company has tried to tackle the problem by funding academic research and updating customers through blogs and in-store advice. It is also investigating technologies to minimise fibre loss.

“It’s something where we said, ‘we don’t want to be surprised, so let’s make sure we have the answer,’” he says.

Explore this year’s interactive BrandZ ranking of the world’s 100 most valuable brands, compiled by Kantar Millward Brown, part of the WPP advertising group