It’s the day after the premiere at New York’s Museum of Modern Art of the new contemporary art documentary The Price of Everything, and octogenarian Larry Poons is basking in his star turn. As the wizened artist labouring away in a rural, ramshackle studio that looks like a dank cave, decades after defying the art world by refusing to continue to churn out his popular “Dot” paintings, Poons is the soul of the film. Dressed in baggy jeans and an ill-fitting jacket at the Yares Art gallery, where his expressively coloured, heavily worked abstractions are on view, he beams when a couple from Argentina pronounce his work “astounding”.

Debi Wisch, one of the film’s producers, arrives and announces that collectors have been badgering her all day, asking for her help getting their hands on a Poons. “I told them they can’t sell it,” says Wisch, neatly encapsulating just one of the art world’s (oft-broken) commandments that mystify outsiders: thou shall not flip a living artist’s work.

The Price of Everything takes its title from Oscar Wilde’s definition of a cynic as one who “knows the price of everything and the value of nothing” to examine the current state of the art world. The film, which opened in US cinemas in October and premieres on HBO in November, sets out to capture the peculiar ecosystem populated by dealers, curators, collectors and, of course, artists.

The result is a yin-yang snapshot of the art world: Chicago-based mega collector Stefan Edlis displays his spreadsheets, reeling off the prices he paid and the current appraisals of works in his collection by brand names like Warhol, Damien Hirst and Jeff Koons. Sotheby’s executive Amy Cappellazzo, preparing an auction catalogue, swoons over a vintage photograph of Willem de Kooning in front of the very painting she’s trying to sell — the “holy grail” of auction marketing. On the flip side, artists Marilyn Minter, George Condo and, less convincingly, Koons talk about their deep need to create, regardless of the payday. The eminent German painter Gerhard Richter points to one of his own paintings, small enough to hold, and says with a mixture of contempt and embarrassment, “I like it, but it’s not a house.”

Sipping coffee while overlooking Central Park, Wisch and her producing partner Jennifer Blei Stockman insist they had no intention of glorifying the money aspect. “You can’t do a movie about the art world without covering the market,” says Wisch. “But our goal was to shift it away and show that in spite of the noise of the market it’s the art that matters.”

Though both have been active collectors for more than 20 years, they didn’t meet until 2015, when a mutual friend, knowing each wanted to make a documentary about the art world, introduced them. Stockman was winding down a 12-year tenure as president of the Guggenheim Museum and hoped to draw back the curtain for the uninitiated. “It’s a very insular, exclusive world,” she says, noting that some gallery assistants are actually instructed to act aloof. She’d also watched with alarm as the museum was increasingly priced out of acquisitions. “All people knew of the art world were the huge, mega sales, and it was very intimidating and off-putting to the general public.”

Wisch, who has a background in marketing and public relations, was interested in exploring why some artists succeed and others fail. “I was fascinated by art students and who made it and why, and the capriciousness of all that,” she says. “Who got anointed? I was fascinated from a marketing point of view.”

Once the women teamed up, they homed in on money as a central, unavoidable issue and asked, when did contemporary art become a commodity? Initially, they focused on A Alfred Taubman, the late billionaire shopping centre developer who bought Sotheby’s in 1983 and revitalised the auction house with a dash of celebrity-fuelled glamour. “He made it sexy,” Wisch says.

But the team, who by this point included director Nathaniel Kahn (My Architect) and a third, veteran producer, Carla Solomon, soon recognised that Taubman, who also served 10 months in prison for his part in a price-fixing scheme with rival Christie’s, could easily command a whole film himself, and they didn’t want to make a biopic.

Instead, they reached back one more decade to the Scull Sale as their pivot point. In 1973, Robert Scull, a prolific collector, decided to hold his own auction of postwar art and achieved unprecedented prices. In archival footage of the sale that the filmmakers restored, a peeved Robert Rauschenberg confronts Scull about selling his work at a hefty mark-up. Scull laughs it off, telling the artist he could now raise his prices. Later, auction houses realised they were simply running out of Old Masters still in private hands and so elbowed their way into contemporary art galleries’ territory.

“Art and money have always had this dance,” Kahn says. “It’s always been an uneasy embrace.”

The filmmakers cast the documentary with archetypes in mind: an art market darling (Condo), a young star whose prices may be rising too fast for her own good (Njideka Akunyili Crosby), a latecomer to financial success (Minter) and a once-acclaimed artist who seemingly disappeared (Poons). “It was career trajectories we were interested in,” Stockman explains.

Relying on the producers’ exceptional access — particularly Stockman’s — Kahn conducted the interviews. “I was not inside that world the way she was,” Kahn says. “Sometimes I felt like Alice going down the rabbit hole — wow, what a crazy world!”

Among the more riveting moments are footage of Condo painting an entire, sprawling canvas in a single morning — “Lunchtime!” he exclaims sardonically on completion — and the psychologically complex Edlis revealing first his Maurizio Cattelan sculpture of a kneeling, child-size Adolf Hitler, titled “Him”, and then the German passport stamped with a “J” for “Jew” that he’d saved for nearly 80 years, since he escaped Nazi Germany with his mother at the age of 15.

The film subtly juxtaposes wildly divergent viewpoints. Well after Cappellazzo, whose business depends on art’s frequent change of ownership, has dismissed museums as “cemeteries” that bury millions of artworks in storage, most of which will never again see the light of day, Akunyili Crosby idealistically calls museums our “gatekeepers of culture”. She offers the hope that even if her paintings are forgotten in her lifetime, museums will unpack them in 150 years, giving them new life. By the end of the film, Edlis has given a $400m chunk of his collection to a museum.

The filmmakers say they were careful not to pass judgment on any of the subjects, even the most mercenary ones. “The connective tissue among all the players was their love of art,” Stockman says.

As for their own collections, both women say they are the primary drivers in their families, though Wisch and husband, Steven, an entrepreneur and former Goldman Sachs partner, have an agreement not to acquire anything “larger than a breadbox” without consulting the other.

For years, Stockman’s husband, David, President Reagan’s one-time budget director and vocal proponent of “trickle-down” economics, couldn’t quite wrap his mind around her fervent collecting. “My husband would get upset with me,” she recalls. “He’d say, ‘This is all illiquid!’ ”

About 15 years ago he got on board and began to appreciate the work by artists such as Picabia, de Kooning, Sigmar Polke and Thomas Struth that his wife has accumulated. As for the stratospheric prices, she says that he warns the market is a bubble. “All bubbles do burst,” she adds with a shrug.

Wisch is more circumspect about her collection, though she describes it as a “hodgepodge”, comprised primarily of painting and ceramics. “Like Jennifer, I don’t care what anyone else is buying,” she says. “I don’t care when people say, ‘Did you make a mistake?’ What does that even mean, ‘a mistake’? That I missed someone? That I bought someone who doesn’t go anywhere? I think you should be in it for other reasons.

“Listen, I bought a $400 painting a few weeks ago from a recent MFA student,” she adds. “I hung it in the apartment. And I love it.” 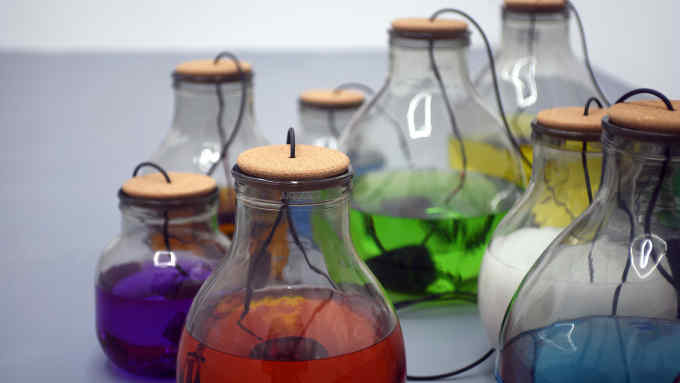