In jeans and a hoodie, Zandile Cewu shows photographs of her 100 or so head of cattle as she drives her pick-up truck along a muddy track in Eastern Cape, one of South Africa’s poorest regions.

The 42-year-old farmer has ambitions for her 444-hectare property that grew from the plot her late father bought cheaply as part of a redistribution programme run by the African National Congress after apartheid fell.

“I want to be a commercial farmer, even a stud breeder,” said Ms Cewu, a star of Farmer’s Weekly, the country’s top agricultural read. “I don’t want to be a smallholder for the rest of my life.”

A parliamentary committee will re-examine a constitutional clause on land reform in the coming months, possibly amending it to allow expropriation without compensation. This would be a radical step aimed at tackling a racial economic divide and reflects the fact that land has become one of most contentious political issues in South Africa.

“Land was the rock on which the ANC was founded,” Cyril Ramaphosa, South Africa’s president, told the Financial Times. “What you now want to do is to unlock the utilisation of our land by spreading it among our people — so that the land can be properly and usefully utilised for the majority of our people.”

Mr Ramaphosa has to balance fears that expropriation will damage the economy against frustrations about stubbornly high levels of post-apartheid inequality in Africa’s most industrialised democracy.

By contemplating land expropriation a year ahead of national elections, the ANC is also protecting its flank from the Economic Freedom Fighters, the leftist breakaway group that is pushing for nationalisation of all land.

“I do not see us getting to a point which Julius Malema [the EEF leader] has mooted — and he says that’s not what it is — of white people being driven into the sea. No, we are not going to do that,” said Mr Ramaphosa.

Taking back land became a populist rallying cry for Jacob Zuma, Mr Ramaphosa’s predecessor, as his popularity waned and he was forced to resign after a factional conflict within the ANC. Members of Mr Zuma’s old guard, many of whom still hold senior positions in the ANC, are likely to pounce on any signs that Mr Ramaphosa, a business-friendly tycoon, is backsliding on land.

Traditional leaders, who control much of the rural land, have also been criticised for holding back reform. Yet with an eye to the elections, the ANC is unlikely to challenge any abuses in traditional land ownership.

“It is urgent that people get property rights,” said Aninka Claassens, director of the Land and Accountability Research Centre at the University of Cape Town. “I have a horrible feeling the ANC feel that traditional leaders will deliver rural votes — which is completely misguided.”

Previous attempts at land reform have faltered, partly because of poor government management of programmes, but also because many of the new farmers receive little support and lack the resources to succeed. New black farmers often find it difficult to obtain loans, particularly when they are on land owned by traditional leaders. There has also been resistance from some white farmers and concerns that a radical approach to reform would threaten agricultural output.

A contentious state audit of the third of agricultural land that is individually owned found that 72 per cent is held by whites and 4 per cent by the black majority. The rest of the land in the audit is held by other minorities. This roughly mirrors high levels of overall inequality, with a tenth of households, mostly white, holding 90 per cent of the wealth.

But the audit did not include land owned by the state or held in trust by traditional leaders, which may be sizeable, and where there are concerns about the security of rights to use it.

The Big ReadLand seizures
Interview: Cyril Ramaphosa on how to fix South Africa 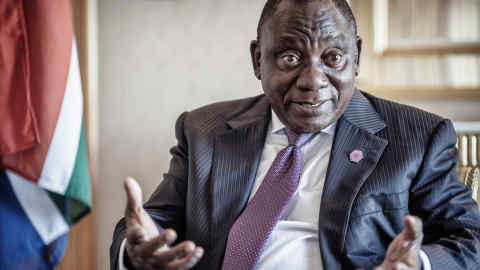 Even with scepticism about the data, there is little disagreement that redistribution has been sluggish. A study concluded last year that about 5 per cent of South Africa’s 86m hectares of commercial agricultural land had been transferred from white ownership since democracy dawned in 1994.

Mzukisi Qobo, a professor at the University of Johannesburg, said: “The record of land reform in South Africa is dismally poor partly because of weak institutions, a lack of urgency in general and an attitude of not caring about what happens in rural communities.”

Groups dominated by white farmers, including Grain SA, have called for more debate on reform but most of their members are wary of constitutional change. Zimbabwe’s shadow hangs over the debate two decades after it authorised land seizures, often violent, that damaged food production for years — and followed failed attempts at reform.

“The conversation needs to happen,” said Sinelizwi Fakade, Grain SA’s co-ordinator for farmer development in the Eastern Cape. “The agricultural industry thought it might never come.”

Ms Cewu would seem a natural supporter of the ANC’s plan to accelerate land reform, but is instead reluctant. Her wariness illustrates the broader difficulties of making land reform work.

For all her success, Ms Cewu struggles to make ends meet. “What would I do with that other land?” she said. “That land is going to need fencing, water systems, storage tanks. You can’t give land to someone who can’t produce more on it.”

Get alerts on South Africa when a new story is published