Passive funds accounted for 16 per cent of US stock market capitalisation at the end of 2021, surpassing the 14 per cent held by active funds, according to the Investment Company Institute, an industry body.

The pattern represents a sharp reversal of the picture 10 years ago, when active funds held 20 per cent of Wall Street stocks and passive ones just 8 per cent.

Since then, the US has seen a cumulative net flow of more than $2tn from actively managed domestic equity funds to passive ones, primarily ETFs.

The seemingly unstoppable rise of index-tracking funds has in turn helped fuel an unprecedented concentration of ownership — and thus voting power.

The five largest mutual fund and exchange traded fund sponsors — out of 825 in all — accounted for 54 per cent of the industry’s total assets last year, the ICI found, a record high and up from just 35 per cent in 2005.

The 10 largest control 66 per cent of assets (against 46 per cent in 2005) and the top 25 as much as 83 per cent, up from 67 per cent. The proportion of assets held by the many hundreds of managers outside the elite 25 has thus halved over the period.

The 10 largest fund houses manage the bulk of passive assets, and writing in its 2022 Factbook, the ICI attributed this surge in industry concentration to the meteoric rise of these funds.

Actively managed domestic equity mutual funds have suffered net outflows every year since 2005, even as their passive peers have had inflows every year bar 2020 and 2021. Index-tracking ETFs have proved more popular still.

US-listed ETFs, the overwhelming majority of them passive, have seen their assets rise fivefold to $7.2bn since 2012.

Growth was particularly strong last year with net issuance of ETF shares — which includes the impact of reinvested dividends as well as net buying — almost doubling from $501bn in 2020, itself a record, to $935bn.

Overall, 88 per cent of ETF ranges saw positive net inflows last year, the ICI found, compared to just 48 per cent of mutual fund ranges, continuing a pattern witnessed over the past decade.

Lamont said it was unsurprising that industry concentration had risen against this backdrop.

As a result, the biggest houses “hold enormous [voting] power”, with some academics highlighting the “potential for oligopolistic collusion between these players”, he said.

Lamont lauded BlackRock’s decision last year to allow its largest clients to vote directly, reducing the fund giant’s proxy power. However he added that “it seems we are a long way away from individual investors picking preferences”.

Todd Rosenbluth, head of research at VettaFi, an ETF data analytics company, previously known as ETF Trends, said it was “easy to be fearful that more money is tied to a small number of firms”, adding that it was “imperative that these firms are as transparent as possible about their decision-making so investors can understand how their shares are being voted”.

Nevertheless he did not think the current level of concentration was harmful, and that instead the economies of scale it created had reduced costs for investors.

Rosenbluth was also relaxed about the rise of index investing, arguing that its “many flavours”, such as large cap, small cap and sectoral and style biases meant passive funds “are not owning the same assets”.

Vincent Deluard, global macro strategist at StoneX, a broker, was also unperturbed, arguing that “flows matter more than AUM and the passive sector has dominated flows for years”.

Demographic data suggest ETFs are likely to continue to grab market share from mutual funds. ICI data show ETF investors tend to be younger — with the average age of the head of the household 45, versus 51 for mutual fund owners — and wealthier, with average household income of $125,000 and household financial assets of $375,000, compared to comparable figures of $104,900 and $320,000 for mutual fund owners.

The current market dynamics may accelerate this process still further.

“If anything, every sell-off accelerates the rotation to passive. Investors sell actively managed funds first, while ETFs and index funds benefit from the mechanic demand of target-date funds,” said Deluard. “By default, all American savings are now invested in TDFs and rolled over into index funds. 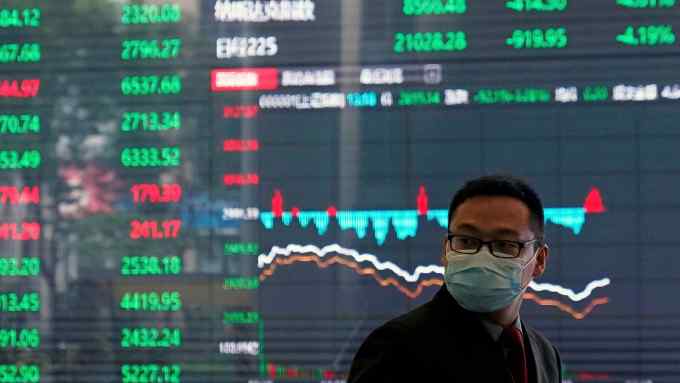