Simone Biles: ‘Sometimes it’s like: how did I just do that?’

Her gravity-defying performances electrified audiences at the Rio Olympics. Now America’s most decorated gymnast is getting used to life back home

Simone Biles, arguably the greatest female gymnast of all time, is doing her best to convince me that she is an ordinary mortal, just like the rest of us. And it is nearly working. Sort of.

Fresh from her record-breaking Olympic debut at the Rio Games this summer, Biles has spent the past two months criss-crossing the US on tour with her fellow Olympians. At night, she has hurdled, flipped and contorted her body across arena floors with dizzying speed and velocity. During the day, she insists, she and her teammates are happy to act like ordinary teens. “We lay around and eat breakfast,” laughs Biles. “We watch TV or Netflix. We try to sleep as much as possible. Sometimes go shopping.”

Over the past year, the 19-year-old has catapulted into international stardom, revolutionising her sport in the process. She left the Games with four gold medals and one bronze to add to her 14 World Championship medals. This makes her the most decorated American gymnast in history.

Watch Biles’ floor routine from Rio and you can see how she pushes the boundaries of physics and acrobatics. In her first pass, she cartwheels and back-handsprings into a double twisting layout, her body perfectly elongated and so far off the ground that she reaches nearly twice the height of her 4ft 9in frame.

From there she moves into her next pass. Now known simply as “the Biles”, it consists of a double flip, with a last-minute half-twist that allows her to rotate 180 degrees in mid-air and end with her landing feet forward. This is considerably harder than a traditional double flip, as it means coming at the landing backwards without being able to see the floor. For her third pass — known as a double twisting double back — she moves from a back handspring into a cannonball, twisting and turning in the air like a corkscrew.

Sometimes I’ll do a routine and I’ll think: did I get everything? Other times I’ll blow my mind. It’s like: how did I just do that?

Off the mat, Biles is poised, gracious and self-possessed, repeatedly giving credit to her “Final Five” Olympic teammates — Rio was both their coach’s last Olympics and the final year that countries will be able to put forward five members for their team gymnastics competition — but also taking pride in her own success.

Upon winning her first gold in Rio, Biles said in an interview with Sporting News: “I’ve finally done it. It’s so exciting. You never know the feeling until it hits you.” But she pushed back against the classic comparisons to record-breaking (male) athletes. “I’m not the next Usain Bolt or Michael Phelps. I’m the first Simone Biles.”

When I catch her on the phone in mid-November, she is nearing the end of her whirlwind tour. Over the past eight weeks, she has done 38 shows in 36 cities. She has three cities and four more shows left to go, and is counting down the days until she gets to return home to Texas. The day we speak, she is in New Jersey, en route from Washington DC to the West Coast.

In between it all, she has released a memoir, Courage to Soar, which she co-wrote with the journalist Michelle Burford, and has logged multiple television appearances. She also went to the White House to meet Barack and Michelle Obama. “He’s a normal person,” she laughs. “I think we forget that they’re normal. He and Michelle were bickering back and forth about who was getting in the picture [with me].”

Born in Columbus, Ohio, Biles came to gymnastics when she was six, an age when most future Olympic gymnasts are well into training. She was a prodigy even back then — a fact affirmed by a childhood home video, released as part of a recent Nike ad, which shows her seamlessly performing a triple backflip in pyjamas in her family’s living room.

“I loved flipping my body in the air and doing crazy things that kids my age could never do,” says Biles. “There was something new to learn every day.”

Biles was put into foster care as a young child as her birth mother suffered from drug and alcohol addiction. Her grandfather Ron and his wife Nellie began raising her and her younger sister Adria when Biles had just turned three. The couple formally adopted the two girls in 2003, when she was six, and she considers them her parents.

As a child gymnast, Biles progressed quickly through the ranks and began competing professionally in 2011, switching to a home-schooling programme a year later so she could concentrate more fully on the sport. In 2013, she began competing in her first senior international competitions but struggled after falling off the beam and then from the uneven bars at two separate events. A low point came during the August US Classic meet when Biles fell multiple times and failed to complete her vault event.

I loved flipping my body in the air and doing crazy things kids my age could never do. There was something new to learn every day

It was suggested that she see a sports psychologist and just a few weeks after the US Classic, Biles won the USA National Gymnastics Championships, setting her on a path to becoming the reigning world champion — and a new standard-bearer for the increasingly athletic and acrobatic sport.

Even Biles finds it hard to explain the transformation. “Sometimes I’ll do a routine and I’ll think: did I get everything? I’ll get confused and am on autopilot,” she says. “And then other times I’ll blow my mind. It’s like: how did I just do that?”

While her routines can seem hazardous given the back-breaking moves and their velocity, Biles says the most important part is brushing away self-doubt — something she learnt from her conversations with the sports psychologist. “I found [the sessions] sort of calmed me down. Whenever I’m getting ready for a big event, talking to someone that you’re not used to talking to . . . Your parents, your coaches, sometimes they don’t understand. When you can get a different perspective from someone else, it kind of sinks in a little bit better,” she says.

Her newfound fame has taken some getting used to — not that she is complaining. “You just go about your day, it doesn’t stop me from going anywhere. We have security,” she says about dealing with the constant recognition and requests for selfies. “One time I was at a Texas Roadhouse,” she recalls, referring to the steakhouse chain, “and this girl came sobbing her eyes out because she knew I was there.”

It’s a feeling she can relate to. It was just a few years ago, she says, that she was looking up to fellow gymnasts such as Shawn Johnson and Aly Raisman, two women who are now friends and teammates.

Biles is trying to use her fame to promote work with foster kids — something that resonates because of her own experience. She has become the spokeswoman for Mattress Firm Foster Kids, a non-profit launched last year that delivers clothes, school supplies and gifts to some of the 400,000 children in the US foster care system.

She also hopes her own success will help young girls develop a sense of confidence about their bodies. In her memoir, Biles reveals that during her unsuccessful meet, another coach reduced her to tears by declaring that she had fallen because she was “too fat”. “How does she expect to compete like this?” Biles recalls the coach saying in her book. “Maybe if she didn’t look like she’d swallowed a deer, she wouldn’t have fallen.”

Now, she and her teammates have an opportunity to pay it forward, she says. “We think of it as an honour to show all these little girls how strong and confident we can be.”

Life after Rio has brought other opportunities, Biles admits. “Everyone wants a piece of you even though you don’t have all the time in the world,” she says. So far, she is estimated to have received more than $4m worth of endorsements from companies including Nike, Kellogg’s, Hershey’s and Procter & Gamble. But the corporate sponsorships are a work in progress: “We’re still trying to figure it out.”

The “we” refers to Biles’ agent and to her parents, with whom she still lives at home in Texas. While she may now be a global celebrity, they have helped her keep her head. “They’ve always kept me grounded, making sure everyone was equal.” They have also opened a 52,500 sq ft training facility near their home called the World Champions Centre, where Biles and other gymnasts can train.

When she’s not soaring through the air at high speed, Biles catches up on favourite television shows such as The Vampire Diaries and One Tree Hill, and hangs out with the people who remind her of who she really is. “You have to be careful,” she says of eager new acquaintances. “My friends have been friends who I’ve been [with] growing up.”

While others might see a once-in-a-generation Olympic champion, Biles sees something else. “To me, I’m just normal,” she says.

Courtney Weaver is the FT’s US political correspondent 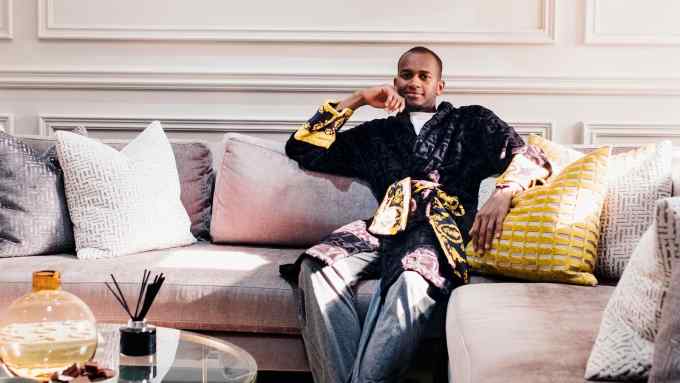